Women judges may become front-runners to fill the vacancy on the U.S. Supreme Court if Brett Kavanaugh isn’t confirmed. 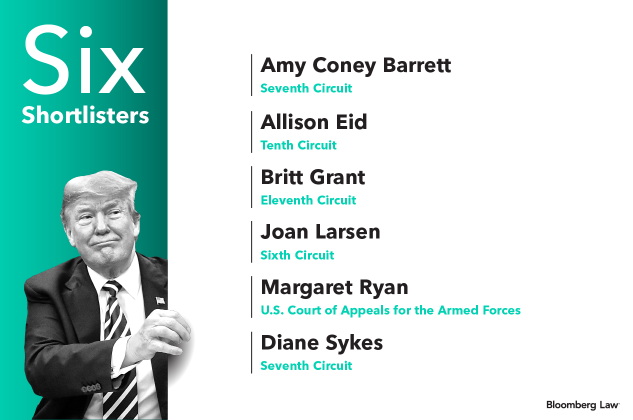 There would likely be significant pressure on Trump to pick a woman from those “who would want to drive home the point that, if the nomination fails, it wasn’t because of the nominee’s political views,” Stephen I. Vladeck, a constitutional law professor at the University of Texas at Austin, told Bloomberg Law via Twitter direct message.

“Presumably, there would be a view that it would be a lot harder for Democrats to object in such a case—on any ground,” Vladeck said.

Kavanaugh’s fate is unclear. His confirmation seemed like a sure thing until Christine Blasey Ford raised allegations last week that he sexually assaulted her in high school.

The Senate Judiciary Committee has pushed back its vote and scheduled a hearing for Monday, but it’s not clear if that will occur.

Kavanaugh can’t lose the support of more than two Republicans in the full Senate, assuming all Democrats vote against him. While Republican support started to re-solidify this week, key senators like Susan Collins (R-Maine) and Lisa Murkowski (R-Alaska) haven’t said how they will vote.

If Kavanaugh’s nomination fails, replacing him with a woman could help Republicans with that demographic in November’s midterms. Republicans in both chambers are under pressure to hold their majorities with voters restless over the Trump presidency.

“Choosing a woman to fill this vacancy would display an understanding that this pick went off the rails in large part because of gender politics—both on the part of the nominee and the committee,” Joe Patrice, editor at legal blog Above the Law, told Bloomberg Law by email.

Six women, all judges on the U.S. Courts of Appeals, are on Trump’s shortlist of Supreme Court nominees, which was last updated in November 2017.

Four are former state Supreme Court justices, and four were appointed by Trump to their current seats.

Several of these women could present a “hidden advantage” for Republicans, Patrice said.

The Republican majority could “argue, fairly or unfairly, that they can still fast-track the nomination because the Senate has already vetted each,” Patrice said.

Seventh Circuit Judge Amy Coney Barrett was one of a handful of finalists before Trump chose Kavanaugh.

Barrett, 46, has drawn attention for opposing abortion. She joined a 2015 letter from Catholic women, in which they stated their belief that human life has value “from conception to natural death.”

Sen. Dianne Feinstein (D-Calif.), the Judiciary Committee’s top Democrat, told her that she was concerned that “the dogma lives loudly within you,” prompting accusations of religious bigotry.

Barrett is a “tougher sell” than some other candidates due to her “strong anti-abortion background and narrow earlier confirmation vote,” Patrice said.

Barrett clerked for the late Justice Antonin Scalia, a favorite among conservatives.

Before she became a judge, Barrett was a professor at the University of Notre Dame Law School since 2002.

That vote means that nominating Larsen could give “both the appearance of bipartisanship” and give Republicans some assurance that a number of Democrats “will feel constrained to support her to avoid flip-flopping,” Patrice said.

Before joining the federal bench, Larsen served as a justice on the Michigan Supreme Court beginning in 2015.

Larsen won election to keep her seat after she was appointed to the court, campaigning as “Justice Joan.”

She was a professor at the University of Michigan Law School for more than a decade, and served as a deputy assistant attorney general in the George W. Bush administration.

Eleventh Circuit Judge Britt Grant clerked for Kavanaugh and was recently sworn in by him.

She also joined Kavanaugh as one of five late additions to Trump’s list in 2017. At 40, she’s the youngest woman on the list.

She’s “clearly one of the most talented young lawyers of her generation and has accomplished an incredible amount,” Carrie Severino, chief counsel and policy director of the Judicial Crisis Network, a conservative organization backing Kavanaugh, told Bloomberg Law earlier this year.

Grant has been an active participant in the Federalist Society, an organization of conservatives and libertarians that has helped Trump select judicial candidates. She also served at the White House in domestic policy roles, under President George W. Bush.

Grant was appointed to the Georgia Supreme Court at the beginning of 2017, after serving as the state’s solicitor general.

The Senate confirmed her to the Eleventh Circuit in July of this year, by a vote of 52-46.

Allison Eid served on the Colorado Supreme Court for over a decade before becoming a federal judge.

The Senate confirmed her to the Tenth Circuit by a vote of 56-41 last year, filling the vacancy left by the elevation of Neil M. Gorsuch to the Supreme Court.

The judge served as a professor at the University of Colorado law school for almost two decades before joining the federal bench.

Her scholarly writings often focused on federalism, under which the federal government shares power with the states. Eid is about 53 years old.

Also a Thomas clerk, Judge Margaret Ryan has served on the U.S. Court of Appeals for the Armed Forces since 2006.

The Senate confirmed her unanimously.

Ryan served on active duty for the U.S. Marine Corps from 1987 to 1999, in countries including Japan, Saudi Arabia, and the Philippines.

She later became a partner at Wiley Rein & Fielding in Washington.

At 60, Judge Diane Sykes is the oldest woman on Trump’s list, which could hinder her chances at being nominated.

But she was one of the first judges that then President-elect Trump mentioned in 2016 as a possible Supreme Court pick.

She’s a colleague of Barrett’s at the Seventh Circuit, where she’s served since 2004.

She served on the Wisconsin Supreme Court for several years.

Sykes has described herself as a “judicial conservative” whose approach to judging incorporates “judicial restraint; respect for precedent; deference to the legislative branch and its public policy choices; sensitivity to separation of powers; and an approach to legal interpretation that focuses on the plain language of the law, interpreted reasonably and in the context in which it is used.”