, one of the world’s largest oil refiners, will promote its top lawyer July 15 to chief financial officer. Jason Fraser, a legal department veteran at Valero, will succeed CFO Donna Titzman once she retires next month, the San Antonio-based company said June 19.

Rose Through Ranks: Titzman joined Valero as an accountant in 1986 and has served as CFO since May 2018. Valero said Richard Walsh, vice president and deputy general counsel for litigation and regulatory law, will take over as general counsel from Fraser, who’s served in that role since January 2019.

Industry Turmoil: Valero is the latest in a string of energy companies to announce changes in its law department leadership amid economic turmoil in the oil and gas space. Valero also isn’t alone in promoting its top lawyer to financial chief. Brian Baxter reports.

ID Experts Sued for Merger Payments Over Federal Contract
ID Experts and its private equity parent were sued in Delaware by its former owners, who claim they’re owed a $7.2 million post-merger milestone payment over the company’s $400 million data security contract with the federal government.

Hedge Fund Sued for Self-Dealing, Ditching ‘Market Cliff’ Plan
Ark Strategic Investments LP, a small hedge fund, was hit with a Delaware lawsuit claiming it abandoned its strategy of conserving capital during boom times to snap up distressed assets after a “market cliff” in favor of a self-dealing software acquisition.

Slack Sued for Records Over App Outages After 2019 Market Debut
Slack Technologies Inc.'s directors were hit with a Delaware records lawsuit Thursday seeking to probe claims that they overstated the encrypted messaging platform’s capacity and reliability to inflate its stock before taking it public last year.

Employers Must ‘Tread Lightly’ With Social Media Protest Posts
The #BlackLivesMatter protests fighting racial injustice and police brutality erupting on the streets, as well as on social media, have legal implications about what workers can say or do in or out of the workplace.

Bonuses Tied to Diversity in Banks’ Push for Long-Awaited Change
When frustrated U.S. lawmakers surveyed the nation’s top banks last year on whether they link diversity figures to executives’ compensation, the answer came back unanimous: No.

Zoom to Offer All Users Full Encryption, Bending to Pressure
will offer full end-to-end encryption to all users, free and paid, succumbing to pressure from members of Congress and the public who pushed the video-conferencing company to bolster privacy.

Amazon Uses Non-Competes in Ways Its California Rivals Can’t
When Brian Hall accepted a job at Google early this year, he says his former employer was congratulatory. cloud-computing boss Andy Jassy said by email that he wished Hall would have stuck around longer, but that he wished him “nothing but the best.” 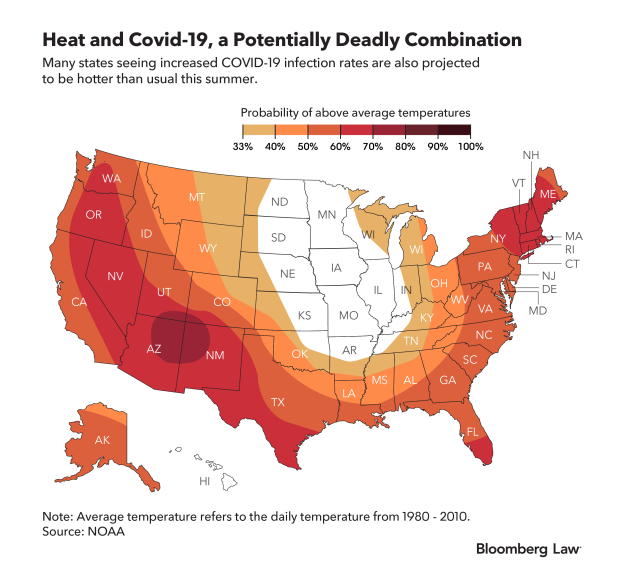 INSIGHT: Workers’ Comp Protect Employers From Virus Claims
As the economy reopens, many businesses fear a deluge of employee lawsuits alleging that unsafe workplaces led them to contract Covid-19. Goodwin Procter attorneys explore employer liability for Covid-19 spread in the workplace, and in what cases workers’ compensation might provide protection from employee lawsuits.

INSIGHT: Labs Must Follow Two Kickback Laws During Covid-19
Despite rollbacks to Medicare and Medicaid requirements for clinical laboratory services during the Covid-19 pandemic, labs are still targets for prosecution under the Eliminating Kickbacks in Recovery Act. Epstein Becker Green attorneys say there’s been no EKRA guidance from the DOJ, which has stated its intent to aggressively pursue Covid-19 fraud, and offer compliance pointers.

INSIGHT: Municipal Natural Gas Bans Hurt American Consumers
Many families are tightening their budgets during the economic effects of the pandemic, and former Congressman Albert Wynn, now a strategic adviser for the GAIN Coalition and senior director at Greenberg Traurig, says natural gas is part of the solution because of its affordability. He says state policy makers should follow the lead of states that have passed laws barring local governments from prohibiting new natural gas hookups.

INSIGHT: Telehealth Boost in Response to the Covid-19 Outbreak
The nation’s efforts to treat and stem Covid-19 infections has led state and federal governments to temporarily relax telemedicine restrictions, in efforts to alter requirements that once stood in the way of doctors communicating with patients remotely. Wolfe Pincavage’s Lindsay Lowe says patients and the medical community have benefited from telehealth platforms during the pandemic, and looks at the possible post-pandemic scenario.

INSIGHT: Virtual Criminal Jury Trials Pose Practical Challenges
The Sixth Amendment guarantees a defendant’s right to confront his or her accuser, and courts have consistently held that a virtual confrontation isn’t sufficient; however it’s unclear if that view will change in light of the current pandemic. In the first part of a two-part series, Ballard Spahr attorneys examine practical challenges accompanying virtual trials.

INSIGHT: A ‘Simple and Momentous’ Title VII Opinion—What Employers Need to Know
The U.S. Supreme Court’s Bostock opinion simply—but momentously—says an employer who fires an individual for being gay or transgender violates Title VII of the Civil Rights Act of 1964. Norton Rose Fulbright attorneys examine the decision and impact and say employers should consider training and clarifying language in some written policies.

INSIGHT: DOJ Looks for More Data in New Corporate Compliance Guidance
New Department of Justice corporate compliance guidance updates a 2019 document, but the overarching point remains the same: Companies should adopt a risk-based compliance program, based on a thoughtful and rigorous assessment of the company’s risk profile, embed preventative and detective controls tailored to those particular risks, and be data driven in monitoring the effectiveness of those controls, Vinson & Elkins LLP attorneys say.

INSIGHT: How to Protect Boards From Covid-19 Governance Risk
Companies and their boards are largely facing reopening decisions alone, and their decisions in the coming weeks and months will be fundamental to the companies’ survival. Akerman LLP’s Bill Ide gives boards four important steps to take now to build the stakeholder trust, which can inoculate them from being viewed as responsible for their stakeholders’ health and economic misfortunes.

Leading Questions: Mintz’s Frank Earley Leaves Work at the Door
Frank Earley is a litigator at Mintz Levin in New York, and focuses on securities and complex commercial disputes.

Big Law Marks Juneteenth with ‘Blackish’ Star, Office Closures
While Big Law firms across the country closed to observe Juneteenth, Duane Morris marked the occasion in a different way. The Philadelphia-based firm brought in actor and director Laurence Fishburne, who stars in ABC sitcom “Blackish,” to talk about fighting racism with love.

PG&E Pleads Guilty to Killing 84 People in 2018 Camp Fire
pleaded guilty to involuntary manslaughter, admitting in a California courtroom that the bankrupt utility killed 84 people after its equipment ignited the deadliest wildfire in state history.

Ex-Bumble Bee CEO Gets 3-Year Prison Term, a Rarity in Antitrust
Former chief executive officer Chris Lischewski was sentenced to more than three years in prison for his role in a price-fixing racket, a rare outcome in a U.S. antitrust crackdown.

Ex-EBay CEO’s Texts Triggered Scare Campaign With Cockroaches
Last year, ’s then-Chief Executive Officer Devin Wenig fired off texts to a colleague expressing his ire over unflattering coverage by a blogger of his oversight of the e-commerce site. What followed, prosecutors said, was a criminal scheme by his underlings to cyber-stalk the couple behind the online newsletter.

White Castle Must Face Worker Claims on Collecting, Sharing Data
White Castle System Inc. must face claims that it violated an Illinois biometric privacy law with its collection and sharing of an employee’s fingerprint information.

To contact the reporter on this story: in Washington at jnancarrow@bloomberglaw.com