Ben Penn: The incoming Biden administration is preparing to install at least 20 Democratic workplace policy experts in temporary roles throughout the U.S. Labor Department after the transfer of power, according to two sources familiar with internal planning.

But questions about who will be in charge of labor policy decisions and when are likely to be fluid for a few days after Wednesday or longer—even as President-elect plans a flurry of executive actions over his first 10 days in office, including presidential directives on safely reopening schools and businesses.

The Biden transition has been planning for weeks to install politically appointed acting personnel at the DOL. These political hires will begin work to alter Trump administration policies while the process of getting Senate-confirmed nominees in place plays out.

The Biden personnel reflect a mix of seasoned Obama-era DOL hands along with new faces who are experienced in employment law, according to the sources, who were briefed on the transition’s planning and requested anonymity because they didn’t have clearance to discuss internal deliberations. Some of the appointees will be short-timers, while others are expected to get permanent roles.

The roster was said to be in flux as of late last week, and not all of the start dates will be on Jan. 20, as some are still waiting for their paperwork to get approved. The Biden transition didn’t respond to a request for comment, and DOL media representatives didn’t respond to multiple inquiries about succession plans.

The immediate line of succession at the Labor Department calls for veteran DOL career executive Al Stewart assuming the title of acting labor secretary on Wednesday, according to two different sources who also requested anonymity because they lacked authorization to discuss the matter publicly.

Stewart is a familiar and highly regarded figure at the agency; he currently serves as deputy assistant secretary of operations after a quarter century at DOL.

But it’s possible Biden will designate a different career official to serve in the temporary Cabinet gig, while he waits for labor secretary nominee Marty Walsh to get a Senate confirmation vote.

Plus, there were signs that other career executives who would take charge at DOL subagencies according to the line of succession may call the shots for a brief period, if at all.

For example, at the Wage and Hour Division, Michael Kravitz, the agency’s associate administrator for performance and communications, is the designated acting WHD administrator under the line of succession. But Biden political hires are planning to assume control of the subagency from Kravitz within a few days of the transfer of power, if not sooner, another source said.

Ben Penn: As the Biden administration builds out in coming weeks, Walsh will be dual-hatting as Boston mayor and prepping for a Senate confirmation hearing.

Walsh’s union credentials went a long way toward him landing the nomination, but his coziness with labor is also what Republicans may try to hammer him on during his hearing.

The business lobby has been doing its homework on Walsh, reaching out to Boston affiliates for intel. And what they’re learning is that Walsh has the demeanor of a labor secretary they’ll find to be reasonable, even when advancing policies that employers disagree with.

For that reason, we haven’t seen any signs of Republican-led turbulence that could spell trouble for the former union leader’s confirmation. 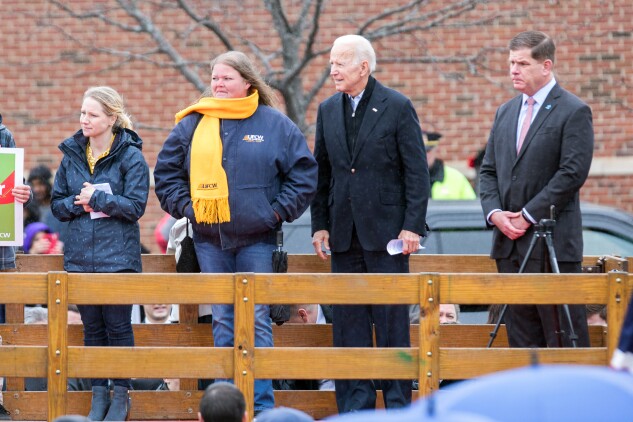 It’s still tough to reckon how someone with strong support in organized labor has managed to earn a sterling reputation in Boston industry circles. After all, one can’t please everyone when running a major city.

Jim Rooney, president and chief executive officer of the Greater Boston Chamber of Commerce, has known Walsh for decades. He said the mayor strikes this delicate balance by making a real effort to seek out the industry perspective before making decisions.

“He’s strong and he’s going to advocate for, and he’s going to represent, working men and women—there’s no mystery to that, in my view,” Rooney said. “Now, that being said, he’s easy to talk to, easy to work with. He’ll put his cards on the table and he’ll understand where you are coming from; and to the best of his ability, he’ll figure out how to get to a win-win.”

The high court’s landmark 2018 ruling in Janus v. AFSCME delivered an immediate financial blow to unions representing government workers. They could no longer force nonmembers to pay “agency” or “fair-share” fees to cover collective bargaining and other nonpolitical expenses, which typically amount to 75% to 85% of full member dues.

Public-sector unions, though, have largely staved off an exodus of members resigning in order to enjoy the benefits of a union without having to pay any fees. Yet the full impact of the Janus ruling remains to be seen.

The Supreme Court will likely determine whether public-sector unions will be on the hook for years’ worth of previously collected agency fees, in what would be a financially devastating outcome with the potential to bankrupt some unions, according to labor law professors.

Even before the high court handed down its Janus decision, unions started getting hit with lawsuits seeking refunds on required fees collected from nonmembers.

The trickle of fee-clawback lawsuits became a torrent after the Supreme Court’s conservative majority declared that compulsory agency fees in the public sector violate the First Amendment, overturning its 40-year-old precedent that had allowed such fees. Dozens of suits have been filed seeking refunds on years’ worth of previously collected fees.

While district and circuit courts have roundly rejected those lawsuits, at least five cases have percolated up to the Supreme Court. The plaintiff in one of those cases is Mark Janus, the former Illinois government worker who won at the high court in 2018.

Unions have been winning based on the good-faith defense. Lower courts have said they were justified in relying on longstanding Supreme Court precedent and state law implementing that precedent when they mandated that nonmembers pay fees.

Public-sector workers represented by the National Right to Work Legal Defense Foundation and conservative lawyer Jonathan Mitchell have asked the high court to review whether the good-faith defense can protect unions.

The justices first scheduled a fee-refund case for their private conference, to consider taking it, last June, but they’ve continued to push back those internal deliberations as more and more petitions have piled up at the court. Justices bumped the issue from their conference for the eighth time last week.

And the Janus decision, according to some conservative activists, demands more than just fee refunds. Lawsuits relying on that ruling have challenged other elements of labor-management relations, including the mandatory agency fees in the transportation sector and unions’ power to serve as government workers’ exclusive bargaining representative.