Boston Mayor Marty Walsh listens to a question at a press conference in March 2020 in Boston, Mass.
Photo by Scott Eisen/Getty Images

President-elect announced Thursday that he has named Boston Mayor to be labor secretary.

If confirmed by the Senate, Walsh would take control of a Labor Department that Biden has pledged to reorient toward workers, with a stronger response to the Covid-19 pandemic including a promise to issue an emergency standard that would protect workers from on-the-job infection. 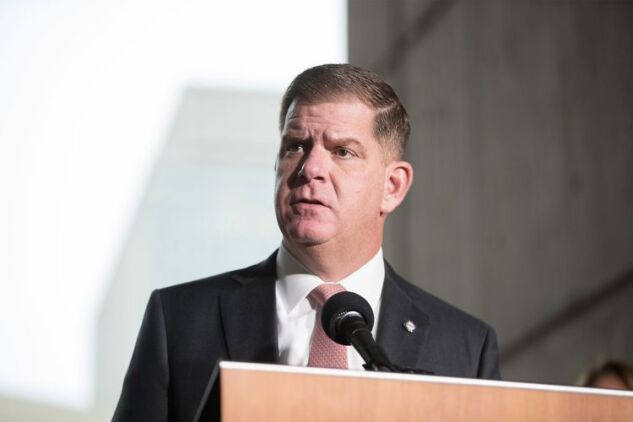 Walsh also would be responsible for coordinating states’ payment of unemployment insurance benefits to millions of workers who remain sidelined during the pandemic.

The Boston mayor was among a slate of selections announced Thursday evening, including Rhode Island Governor as commerce secretary, Isabel Guzman as administrator of the Small Business Administration and Don Graves as deputy secretary of commerce.

Walsh is a former head of the Boston Building and Construction Trades Council who enjoys union support and his appointment is a signal that Biden will make a priority of a labor agenda.

Yet his nomination will disappoint a coalition of Asian-American lawmakers, worker advocacy groups, and women leaders who had called on Biden to name California Labor Secretary to the post.

Walsh, who’s entering the final year of his second four-year term as mayor, capitalized on his close ties to Biden and background in organized labor to land pivotal endorsements from U.S. union leaders.

Republican Representative of North Carolina, ranking member of the Committee on Education and Labor said the Walsh nomination “raises significant concerns about the federal government’s role in shaping the future of our evolving workforce.”

“I have serious concerns that the Department of Labor under Walsh will crush our economic recovery by strangling business owners with an onslaught of job-killing regulations and vindictive and overzealous oversight. America’s workers, families and small businesses deserve better,” she said.

Walsh and the president-elect have bonded over the past decade, including during Biden’s visits to Boston when he was vice president. Both men have embraced their working-class, pro-labor roots in their rise in politics. Biden presided over Walsh’s 2018 inauguration for his second term.

Walsh previously served as a Massachusetts state representative for 17 years, coinciding with his time as a union official. In his legislative role, he was a principal liaison to Massachusetts unions on labor policy issues.

Since resigning his building trades leadership position in 2013 to launch a mayoral campaign, Walsh has used his public office to advance a worker-friendly agenda. That includes signing an executive order certifying that vendors with city contracts don’t engage in “wage theft,” and pushing for an ordinance establishing six weeks of paid parental leave for city employees.

(Updates with attribution in first paragraph, other picks in fourth, fifth.)