Public-sector unions were largely able to stave off a membership exodus in the two years since the U.S. Supreme Court barred them from collecting mandatory fees, according to a Bloomberg Law analysis of federal disclosures.

The court ruled in Janus v. AFSCME on June 27, 2018 that unions could no longer collect mandatory “fair share” fees to cover the costs of collective bargaining, reversing a 40-year precedent that let unions charge partial dues. These agency fee payers, as they were known, paid a lower rate than full members, whose dues also support the union’s political activity. But the high court sided with conservative petitioners, who argued that fair share fees in the public-sector violated the First Amendment.

The Labor Department disclosures show that many unions were able to convert passive fee payers into full-time members, though the results vary by union. Questions remain whether the unions’ strategy is sustainable in the long run, particularly during a pandemic that has wiped out local government budgets and snarled traditional organizing efforts.

“The tax base is just cratering—you have so much reduced economic activity, people aren’t paying,” said Sharon Block, a former Obama administration official who directs the Labor and Worklife Program at Harvard Law School. “State and local governments have to have balanced budgets, they can’t pass a trillion-dollar relief bill, so any shortfall is devastating.”

The impact of the Janus decision could take on new proportions if the justices agree to consider whether public-sector unions have to pay back previously collected mandatory agency fees. Lower courts thus far have rejected a slew of lawsuits seeking refunds, finding that unions relied on what was then valid law when they required nonmembers to pay fees.

Unions with a large public-sector membership were hit the hardest by Janus. The American Federation of State, County and Municipal Employees, the respondent in Janus, had a net loss of 70,000 members and fee payers from 2017 to 2019, the data shows. While the union added 40,000 full-time members, it wasn’t enough to offset the 110,000 agency fee payers lost as a result of Janus. Similarly, the Service Employees International Union posted a net loss of 55,000 members over the same period. 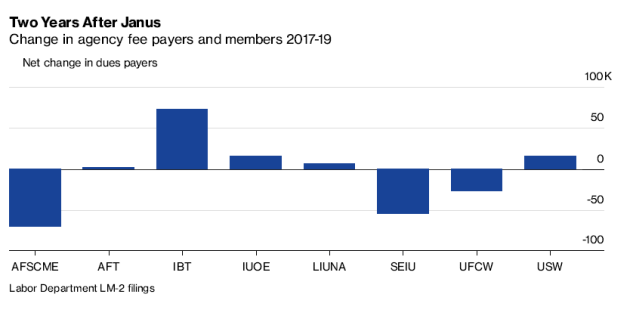 “We had originally anticipated that we could lose up to 30% if we didn’t develop a program that really went back to basics as far as losing members and fair-share fee payers,” and those losses never materialized, said AFSCME President Lee Saunders.

Other unions had more success. The American Federation of Teachers had a net gain of 1,800 members and fee payers over the same period, signing up more than 92,000 members. In an interview, AFT President said a recent string of organizing victories not included in the Labor Department disclosures will add as many as 13,000 members.

“What was intended by the people who brought this case was to defund us, and to not simply erode the fee payers but try to erode membership,” Weingarten said. “And that hasn’t happened.”

The 2018 case brought by Mark Janus, an Illinois government worker who objected to paying a portion of his salary to AFSCME, argued that mandatory “fair share” fees to cover costs of collective bargaining in the public sector amounted to forced political speech. Since the 1977 ruling in Abood vs. Detroit Board of Education, the Supreme Court held that since a union must advocate on behalf of all workers, they may charge fees to recoup collective bargaining costs. But in 2018, the court agreed with Janus’s conservative attorneys that collective bargaining in the government realm is inherently political, and that requiring workers to pay for it is therefore unconstitutional.

While Janus’s attorneys focused on the First Amendment argument, union leaders fretted that the decision would encourage more public workers to drop out, magnifying: the “free rider” effect where employees can reap the benefits of union bargaining without supporting the union financially.

Federal data suggests that never materialized. Three of the eight unions surveyed by Bloomberg Law—the Teamsters, UFCW and the United Steelworkers—suffered slight drops in membership between 2018 and 2019, all less than 5%. For the Teamsters, public-sector membership has remained around 200,000 members, out of 1.4 million members total, said Jason Rabinowitz, director of the Teamsters public services division.

Like many unions, the Teamsters said they recognized a loss was likely in the conservative-leaning Supreme Court and began persuading workers to become full members. In conversations with workers, union officials presented the case as an attack on collective bargaining writ large.

“It was good old-fashioned organizing of our members—education and preparing them for what’s coming,” Rabinowitz said. “The main message was that our rights are under attack from people that want to weaken unions so the poor can get poorer and the rich can get richer, and that we have the power to maintain our strength just by all of us continuing to stand together. And that message really resonated with our members.”

“When Janus came out, our people had been inoculated for it, prepared for it,” said United Steelworkers Vice President Fred Redmond, adding that public-sector membership increased by 100 people after the ruling. “We had very marginal effect, if any.”

How the ruling affected unions’ finances is more difficult to discern. All eight unions surveyed by Bloomberg saw an increase in assets from 2018 to 2019, save for the International Union of Operating Engineers, which was down 3%. At the same, four of the unions—AFSCME, AFT, IUOE, and USW—reported less incoming money in 2019 than the year prior, though it’s not clear whether that was a result of Janus. Weingarten, for example, said AFT’s cash flow is typically tied to the union’s convention schedule.

Four unions—AFSCME, AFT, IUOE, and Laborers’ International Union of North America—also reported less cash on hand in 2019 than the year prior.

AFSCME is now focused on expanding collective bargaining to new populations. In Virginia this year, it championed legislation allowing public workers to unionize on the local level, opening up 20,000 potential new members, according to Saunders. In California last year, it worked with SEIU on a bill expanding collective bargaining for child care workers.

“We’ve come back and come back strong,” Saunders said. “We aren’t losing our focus of organizing across the country. And you know, that’s our purpose.”