Welcome back to the Big Law Business column on the changing legal marketplace written by me, Roy Strom. This week, we take a brief break from our typical business-centered fare to take a look at a Skadden associate’s enduring fight to find a cure for ALS. Sign up to receive this column in your inbox on Thursday mornings.

Brian Wallach told me a little over a year ago that he wanted his organization, I Am ALS, to raise $100 million within three years.

It seemed like an ambitious goal for a number of reasons, not least of which was that doctors told Wallach in 2017 that he might have only six months to live if he was diagnosed with amyotrophic lateral sclerosis, or ALS.

Since his formal diagnosis at age 37 with the illness, often called Lou Gehrig’s disease, Wallach has defied the odds in a number of ways.

While Wallach and I Am ALS are far from solely responsible, they have amplified the voices of ALS patients in circles that move the needle: the amount of federal funding for ALS research has grown by more than $50 million in the past 18 months. And Wallach is hopeful that number may reach $95 million by the end of the year. 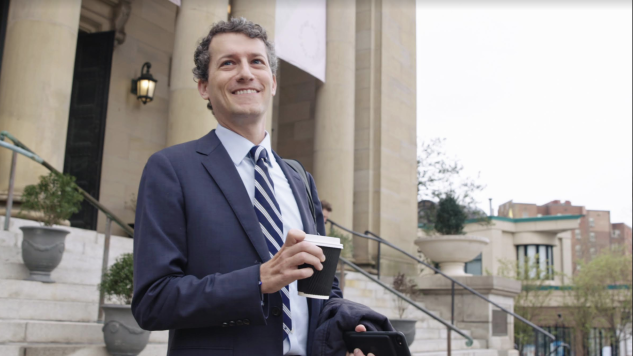 “The ability to continue to practice law and the ability to engage in things that are not directly related to ALS is actually an incredible gift that allows me to maintain the mental balance you need to engage in a fight like this,” Wallach said in an interview.

Wallach’s I Am ALS and the ALS Association have asked Congress to double both of those appropriations in next year’s budget. The fight has received bipartisan support from U.S. Sens. Dick Durbin, Lisa Murkowski, and others. Wallach said many lawmakers have taken up the cause because of a family member who was diagnosed with ALS or Parkinson’s disease, which may benefit from some of the same medical research.

“The other reason we’ve seen the adoption of a lot of these ideas is it is amazing what happens when you ask,” Wallach said. “You put yourself out there in public and say, ‘We have a fight.’ And for a long time this fight was one that nobody knew about, or they knew about it episodically. We are trying to change that.”

Wallach testified before Congress last April. He received more than $450,000 in funding for I Am ALS from the Chan Zuckerberg Initiative in September, and last month I Am ALS and the ALS Association made a $500,000 grant to fund research by BrainStorm Cell Therapeutics.

Wallach has also gotten a Twitter shout out from his former boss, Obama, who lauded the group’s work.

I Am ALS, which Wallach launched with his wife Sandra Abrevaya, now is a community of more than 70,000 patients and has raised more than $2 million in seed funding. It has seven employees and recently launched a patient portal that helps those recently diagnosed navigate their confusing new normal. It has resources on what to ask doctors during a diagnosis, where to get treatment, and which clinical trials are available to patients.

Apart from a small portion of inherited cases, the cause of ALS is largely unknown, but it is virtually always fatal, typically within three to five years.

That causes Wallach to confront his own mortality on a daily basis, something he now sees others wrestling with more often due to the Covid-19 pandemic. He said the pandemic has opened the eyes of many to the realities of a terminal patient. And he has been inspired by collective efforts to find a coronavirus vaccine.

“And that, is oddly enough, a very powerful thing in the fight against ALS,” he said. “Because you can go to people and say, ‘We know this can be done. The question is, do we have the will to do it in this space, and how do we make that will real?’ So I actually think there is a synergy between the fight against Covid-19 and the fight against any terminal illness.”

On Silicon Valley: In one of the largest lateral deals of the year, Freshfields launched a Silicon Valley office this week with five hires from across Davis Polk, Wilson Sonsini, Sidley Austin, and Latham & Watkins. The team is set up to help technology clients with M&A, capital markets, regulatory issues, and securities litigation. The group will add momentum to Freshfields’ M&A practice just eight months after the firm hired rainmaker Ethan Klingsberg from Cleary Gottlieb. The firm ranked No. 1 for law firms by global M&A deal value through six months this year, according to data compiled by Bloomberg.

On More Silicon Valley: Freshfields’ splash comes just a week after I wrote about Paul Weiss’ interest in Silicon Valley following the firm’s hires of Karen Dunn and Bill Isaacson from Boies Schiller. Here is one data point that may explain the allure of Silicon Valley-based practices. Just five of the largest technology companies—, , , , and —now account for nearly 22% of the value of the S&P 500. That’s up from nearly 18% in late January.

On Law Firm Mergers: Or the lack thereof. Only seven firm combinations were completed in the three-month period ending June 30, and all acquisitions were firms with 20 or fewer lawyers, according to Altman Weil MergerLine. It was the fewest number of deals recorded since the third quarter of 2010, when firms were reeling from the Great Recession, Elizabeth Olson reports.