Paul, Weiss, Rifkind, Wharton & Garrison has set its sights on building a Northern California office, entering a complicated market that has bedeviled Wall Street firms in the past and ladled rewards on select few outsiders despite its appealing Big Tech clientele.

Chairman Brad Karp has said the firm wants to establish a Northern California presence following the hires of star litigators Karen Dunn and Bill Isaacason from Boies Schiller Flexner. Although they’re based Washington, the duo’s client list already includes some of the top names in Silicon Valley: , , , and founder and Chief Executive Officer Jeff Bezos.

Silicon Valley Big Law market insiders said Paul Weiss has the brand, cache, and pocketbook to expand its presence into the insular legal market advising Big Tech. But building a Silicon Valley office will likely be a long play in a market with little to no overnight success stories, requiring delicate execution and a commitment to a strategy over years of perseverance even for the few Wall Street firms that have been able to build a significant presence.

Only half of the eight Wall Street firms that have launched Silicon Valley offices since 1991 currently have more than 40 lawyers there.

If a firm “makes the right moves and has the right people and culture and connects in the right way with people, there’s no reason they can’t be very successful here,” said one partner at a competitor firm, who spoke on condition of anonymity. “But it takes a lot of patience, time and energy to make it happen.”

Karp has a reputation for landing transformative deals that have helped build his firm’s presence in key practices and locations, including public company M&A in New York and appellate litigation in Washington.

Dunn and Isaacson’s relationships could serve as a foot in the door at some major companies, industry sources said, but cracking the market for Silicon Valley dealmakers has proven difficult for out-of-town firms in the past.

The area’s deal lawyers are a precious commodity that often travel in packs—a hiring strategy many Wall Street firms have avoided in favor of marquee individual additions. And gathering momentum in a technology practice takes more than a checkbook. It requires buy-in from the technology founders and boards who want lawyers that “get tech,” as they often say.

Paul Weiss last year was the third most profitable law firm by profits per partner which came in at $4.7 million, according to AmLaw rankings.


While New York’s elite Wall Street firms hold some of the best brand names and highest profits per partner in the business, they’ve had mixed success translating that into a preeminent Silicon Valley practice.

Local firms like Cooley, Wilson Sonsini, and Fenwick have held a tight grip on the growth company and startup practice. 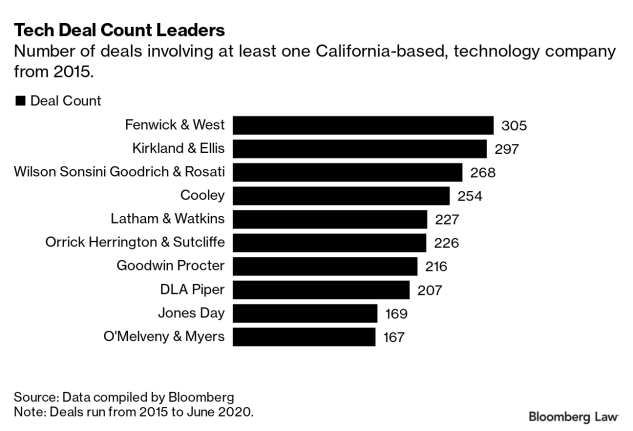 Firms that don’t have an established technology practice have to play catch up. Silicon Valley “takes a commitment because it is so rate pressured,” said one partner at a competitor firm, who requested anonymity to discuss competitors’ strategies.

That narrative harks back to the earliest days of Wall Street firms trying to make a mark in Silicon Valley’s tech scene.

Among a group of 19 firms described by AmLaw as “Wall Street Elite,” eight have a Silicon Valley or Palo Alto office. Five of those offices opened before 2000, and only one has opened since 2011. Willkie Farr & Gallagher opened in 2018 with two corporate partners from Paul Hastings and added litigators the following year from boutique Keker, Van Nest & Peters.

In one well-known industry example of a strategy miscalculation, Shearman & Sterling saw an exodus of partners from its market-leading office in 2000 in part because a young partner at the time unsuccessfully advocated for developing a growth company practice.

An American Lawyer article from 2000 detailing that exodus still circulates among some Wall Street firms, who view it as a cautionary tale. The article quotes Kevin Kennedy, a Simpson Thacher partner, calling Silicon Valley the hardest market for New York firms to crack.

Simpson Thacher declined to comment on its Silicon Valley office for this story. The firm has more lawyers in Palo Alto or Silicon Valley listed on its website than any other Wall Street firm. As in New York, the firm has been known for its private equity clientele in Silicon Valley.


Shortly after Skadden and Davis Polk opened offices in Palo Alto in 1998 and 1999, respectively, Skadden partner Kenton King recalls a local legal publication ran a cartoon of lawyers in suits and ties watching a game of beach volleyball. The onlookers were meant to represent the new, out-of-touch New York firms, said King, who is among the highest-ranked M&A lawyers in Silicon Valley by Chambers & Partners.

“Local firms that had been here for a long time were basically saying, ‘Look, Skadden is a good firm, but they don’t get tech,’” King said in an interview. “That was the counter-marketing that we had to confront.”

Today, Skadden’s Silicon Valley M&A practice is what a number of sources said would be the most likely model for Paul Weiss to emulate, mirroring the firm’s successful company-side M&A reputation from New York. 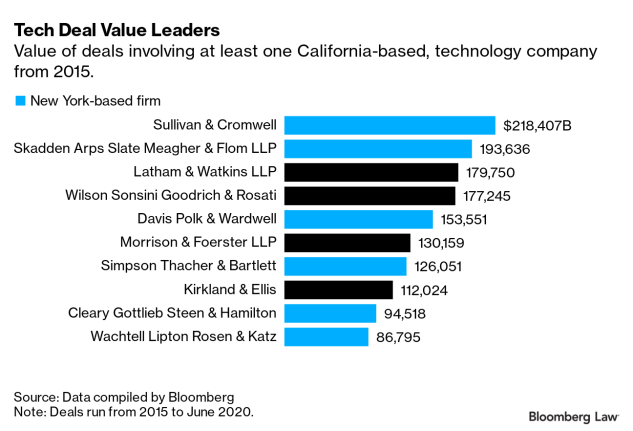 Tech M&A practices don’t rely on a single dealmaker. They require a team of lawyers with high-level skills in a number of practice areas, King and others said. Those practice areas include M&A, capital markets, intellectual property transactions and litigation, executive compensation, and tax. Skadden also pulls from practices across the firm, including antitrust, foreign investment, and cross-border deal work, King said.

Those lawyers also have to be respected in the technology community, which is a difficult currency to acquire.

“You do a deal, you do the next one, and the next one. And you try to exceed client expectations, and demonstrate value on each. And you hope like hell that you don’t screw up any of them,” King said. “One mistake, whether substantive or simply a failure to meet client expectations in some way, can erase all the progress you’ve made.”


Teams of lawyers who handle high-profile M&A work for major tech companies have been a hot commodity for years, and a number of them have moved between firms in recent years. That could complicate Paul Weiss’ search to make an impact hire in that sphere.

“Nearly every firm in the AmLaw 100 wants to be here in a meaningful way because in order to have credibility in the tech space, they feel like they need to,” said Bob Brigham, a former Cooley partner who is now a recruiter for Major Lindsey & Africa. “But there is just not enough top talent to go around.”