SPAC IPOs firmly crossed over from a niche mania to mainstream in the third quarter. Initial public offerings for special purpose acquisition companies, or SPACs, have essentially reached parity with traditional IPOs in both count and capital raised—an astounding rise for a once-shunned investment vehicle. 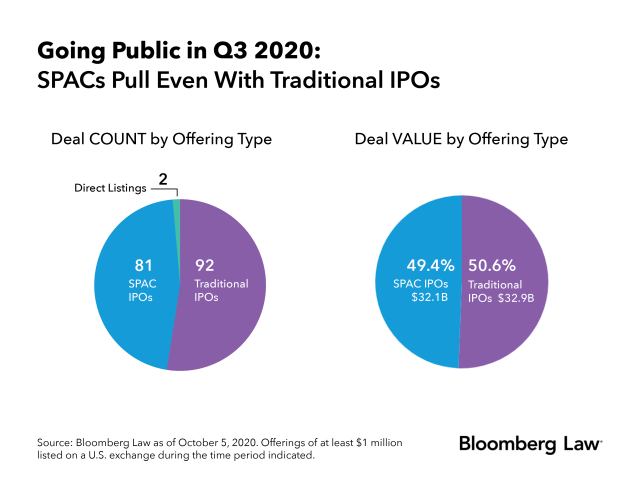 SPACs Pull Even With Traditional IPOs in Q3 Deal Value

SPAC totals get even better when we look at the third quarter alone. In a blistering quarter for IPOs generally, SPACs were hotter than hot. SPAC IPOs raised $32.1 billion on 81 deals, versus $32.9 billion on 92 deals for traditional IPOs. They matched evenly with traditional IPOs, garnering 46.8% of the IPO market’s deal count and 49.4% of its deal value. SPACs actually raised more capital ($10.9 billion) in July than traditional IPOs ($8.3 billion); they matched traditional IPOs deal-for-deal with 26 apiece in August; and the exceeded by one traditional IPO’s total of 36 deals in September. 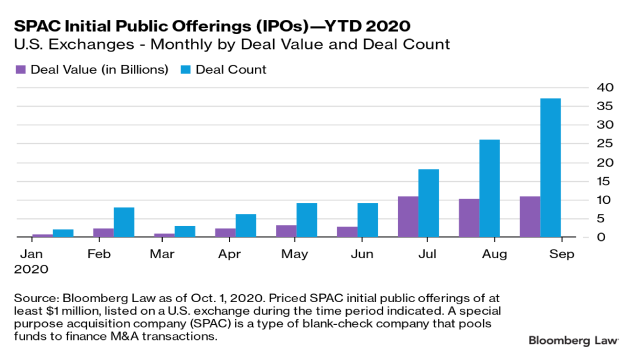 The acceleration of SPAC IPO growth during the third quarter is evident from the graph above. The number of SPAC IPOs rose steadily and appreciably, although deal value maintained a range of $10.2-$11.0 billion. SPACs are now the IPO market’s most significant driver of growth.