The traditional IPO is increasingly becoming seen as optional. For years, IPOs were the only real option to grow a company or provide a liquidity event for existing shareholders. But successful direct listings by major startups Spotify and Slack pointed toward another route. Now, many private companies are giving serious consideration to going public via a third option: a reverse merger with a public SPAC.

These private companies are finding themselves increasingly dissuaded from the traditional IPO path for a variety of reasons: high costs, lost upside for early investors, unwelcome scrutiny, and a longer time horizon for completion. Many are concluding that a SPAC can get a private company where it wants to go faster, cheaper, and with greater certainty in the result during these uncertain times.

What Has Changed With SPACs to Make Them So Attractive?

A private company going public via a public blank check company is hardly a new concept. Indeed, that is an essential part of the concept behind SPACs.

Special purpose acquisition companies, or SPACs, are a type of blank check company whose structure has been improved from the shady investments of days past when such vehicles did not include a trust to protect investors from a sponsor absconding with their money. They are still shell companies, meaning there is no real business in the business. The business of the SPAC, and the obligation of its management, is to raise capital to fund, find, and secure a future reverse merger with a target corporation, usually in a particular industry.

What has changed from past decades is the quality of SPAC management and its supporting professionals, including lawyers, auditors, and underwriters. The stigma is gone. A reverse merger with a listed shell company is no longer a choice largely made by small companies with no market recognition and questionable prospects because doing so was their best option. SPAC IPOs are now routinely raising hundreds of millions of dollars.

Since SPACs normally do deals with an enterprise value of about three to four times their cash, they can wield strong purchasing power while minimizing the effects of dilution caused by warrants and founder shares. SPACs can offer a private company huge sums to go public via a reverse merger. And SPACs can complete a deal substantially more quickly than either a traditional IPO or a direct listing—and without the costs of an investor roadshow or the risks posed by a jittery market.

Historically, a noteworthy negative feature of SPAC IPOs relative to traditional IPOs has been the 20% ownership stake taken by a SPAC’s founders or sponsors. The large ownership share represents such a significant cost to investors that it has long worked to steer money away from SPACs in favor of traditional IPOs despite their own high costs. More and more, however, companies are making a different calculation. 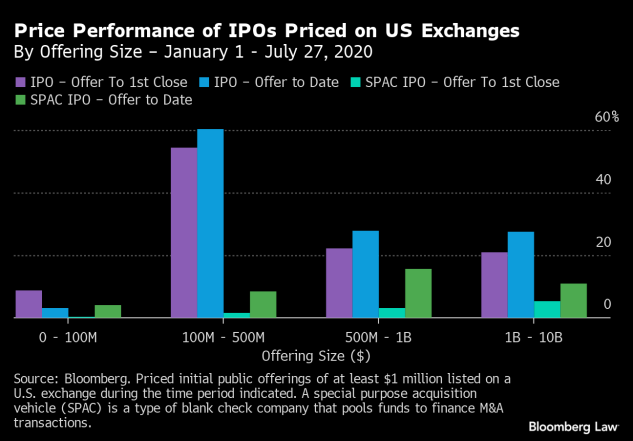 Many traditional IPOs in recent months have seen significant first-day price pops—when a company’s shares jump up in price on their first day of trading. When a newly public company sees a “pop,” they are seeing money that could have been theirs, but for a higher valuation.

The largest price increases have been with lower- to middle-sized offerings ($100M–$500M) where shares have risen more than 60% since their debuts this year. Offerings larger than $500M have risen more than 22% from offer to first close, more than 27% offer to date, while the smallest traditional IPOs only increased less than 9% on day one and only 3% offer to date. SPAC IPOs increased much more modestly, with offerings over $1B rising the most (5.4%) at close on their first day of trading.

Those price pops enthuse the market, particularly retail investors and day traders who can ride that increase to quick and tidy profits. Other market players like the sponsors, venture capital, and private equity firms complain that these price pops are strong evidence that many traditional IPO offerings have been significantly underpriced—unlike SPAC IPOs, whose first-day performances have generally experienced much smaller gains. They see early large price pops as a substantial cost, tipping the balance in favor of SPACs over the traditional IPO route. 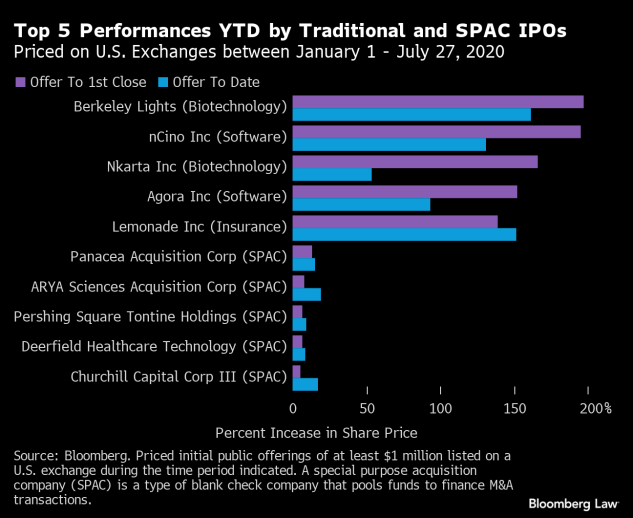 The chart above illustrates the enormous disparity in share performance between the top-performing IPOs and SPAC IPOs. Shares of the top traditional IPOs have been experiencing big price pops on their first day of trading, up to nearly 200%. The best-performing SPAC IPOs have had much more modest price pops—which, backers argue, is better and mitigates the cost of the 20% ownership stake given to SPAC sponsors as founder shares. The largest first-day price increase for a SPAC this year has been 13% by Panacea Acquisition Corp.

Last year, Richard Branson steered his Virgin Galactic space venture into a reverse merger with a SPAC. He passed over traditional IPO and direct listing options to help his company become the first-ever publicly listed space tourism company. The October 2019 merger gave the company a market cap of about $2.4 billion. The value of the company has since more than doubled to about $5 billion.

A report by Reuters on Friday states that Airbnb, the longtime unicorn startup that had been expected to go public in 2020 by either IPO or direct listing until the pandemic disrupted its business and the markets, has been approached by a SPAC to agree to a business combination. Privately held Topgolf International, an operator of golf driving ranges, is reportedly in merger talks with SPAC Churchill Capital Corp. II. Bloomberg previously reported that Topgolf has been laying the groundwork for a traditional IPO as soon as this year with an expected public market capitalization of about $4 billion. And earlier this month, MultiPlan Inc. agreed to a merger with Churchill Capital Corp. III in an $11 billion deal.