By many measures, private equity deal activity in 2022 slowed compared to the super-hot market seen in 2021. An analysis of deal volume and terminations, company valuations, the biggest players in the industry, and diversity among portfolio company founders paints a picture of last year’s PE market.

In 2022, the amount of mergers and acquisitions deal activity involving private equity parties fell by about a third year-over-year. Aggregate investments in the private equity corner of the M&A market saw YoY reductions of 38.6% to $1.30 trillion in 2022, down $820.5 billion from $2.12 trillion in 2021, according to Bloomberg data. 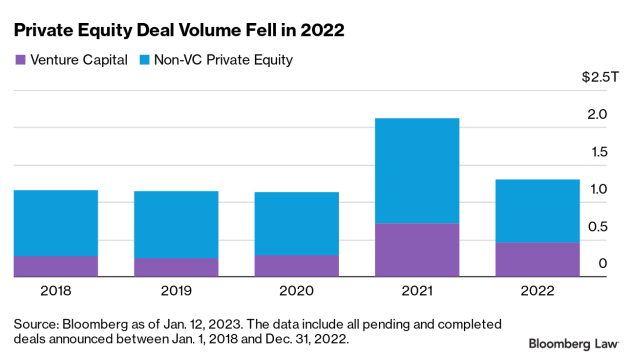 Across the venture capital landscape, Series A/1 funding rounds (the first round of capital raising efforts by companies with strong underlying ideas and developed business models) continued to account for the most common series of funding by deal count. 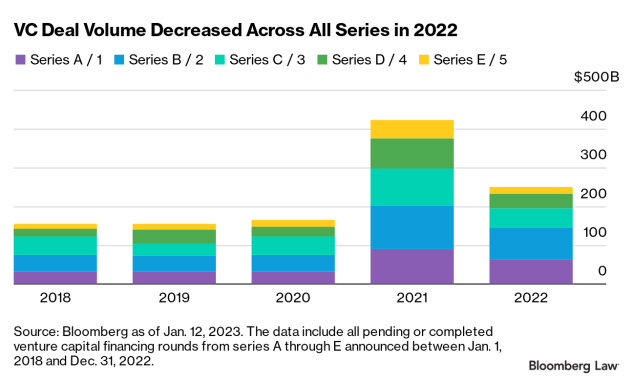 Despite the decrease, VC deal activity remained healthy in 2022, historically speaking. 2023 could be a harder year for capital raising efforts by VC-backed companies, meaning they will likely need to consider alternative sources of capital like venture debt.

As interest rates creep up and financial markets suffer heavy losses as a result, differences in valuation methodologies become evident between fund types. Mutual funds, which are required to disclose valuations of investment companies on a regular basis, have marked companies down at a far more aggressive rate than their more secretive counterparts—hedge funds.

A Bloomberg analysis of the valuations of 46 privately held companies with equity owned by both mutual and hedge funds showed that mutual funds marked down about 70% of the companies an average of 35% through September of last year. To see the difference in valuations by fund type, look no further than the valuations of the software company, Algolia, which lost 39% of its value according to mutual funds managed by Fidelity, despite being marked down just 9% by hedge fund firm Lone Pine, according to Bloomberg’s analysis.

The list of the biggest players in private equity in 2022 comes as no surprise. According to Bloomberg data, Blackstone Inc topped the list of PE buyers, engaging in 60 deals valued at a total of $118.1 billion, including the largest deal in terms of announced value at $45.0 billion: the take private deal of Atlantia SpA. Kirkland & Ellis topped the Legal Adviser League Table, advising just over 13.5% of PE deals. Goldman Sachs topped the list of financial advisers in the space, having advised just over 23.5% of all deals.

According to Bloomberg data as of Jan. 11, 2023, terminations of PE deals were few and far between—an indication that dealmakers aren’t signing agreements that don’t instill a sense of confidence.

Time will tell just how many 2022 deals will end in termination, but for now, deals announced last year have a low rate of termination. In fact, the last year in which fewer deals were terminated was 2013, in which 17 deals worth a total of $4.58 billion were terminated. That’s pretty remarkable considering that 2022 had 2.5 times the number of completed deals compared to 2013 by count.

In the US, Black- and female-founded companies have made progress in the private equity space over the past several years in terms of the amount of capital they’ve raised each year in VC deals, but that amount remains low.

Black-founded startups raise about one-third of the venture capital as their counterparts, according to recent research. Consistent with these findings, just 1.0% of the total VC capital raised in 2022 was by Black founders, a slight decrease from 1.3% in 2021.

From Q1 to Q3 of 2022, companies founded by women closed more deal value than in any full year other than 2021, and companies founded by all-female teams raised $3.6 billion by Sept. 30, 2022, according to Crunchbase data. However, the figure pales in comparison to the $154.9 billion raised by their all-male counterparts.

Analysts and investors may take some solace knowing that deal activity really didn’t come to a screeching halt last year. However, the economy clearly pulled back, and volatility remained high compared to pre-pandemic levels, which leaves a giant question mark about what’s around the corner.

Andrew Miller
Legal Analyst
ANALYSIS: With No Q4 Surge, 2022 M&A Activity Limped to a Close
ANALYSIS: A Shift in Venture Debt Terms May Be on the Horizon
ANALYSIS: Private Equity Can Slow Down, But It Can’t Stop
ANALYSIS: As Down Rounds Loom, VC-Backed Companies Have Options
ANALYSIS: Software, REITs Stand Out in Slower Global M&A Market
© 2023 Bloomberg Industry Group, Inc.
All Rights Reserved