Looking at pending and completed M&A transactions—covering a wide variety of transaction types including minority stake transactions and venture capital financing rounds—2022 had the lowest Q4 global M&A deal volume in the last six years, falling nearly $200 billion short of Q4 2018’s low of $913 billion. And last quarter was the first Q4 since Q4 2018 not to have seen a Q3-to-Q4 increase in volume. 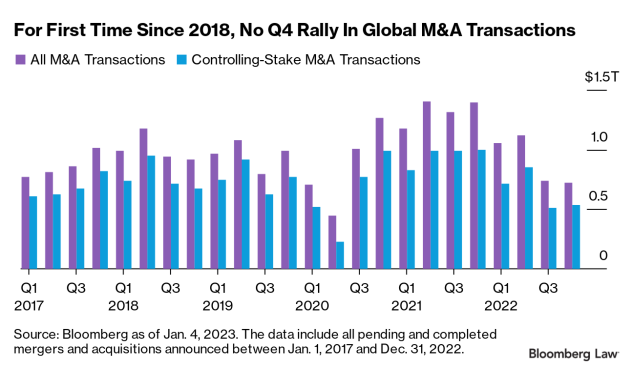 Notably, for the first time since 2017, deal counts for both global M&A transactions and controlling-stake M&A transactions saw a Q3-to-Q4 decrease in 2022. Even 2018, the last year to see a drop in volume from Q3 to Q4, saw an increase in the number of deals announced between the last quarters of the year. 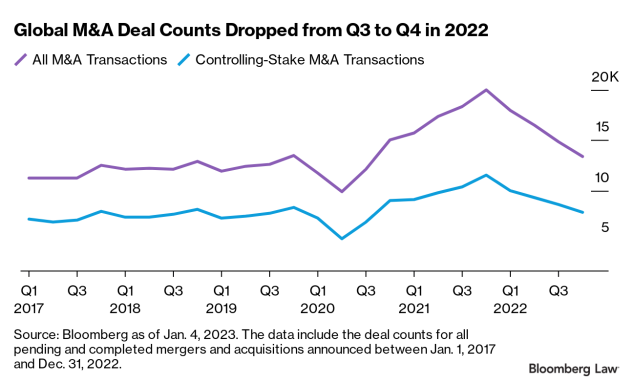 While 2022’s numbers don’t seem drastically different than annual deal volumes since 2017, last year’s quarterly numbers—especially the slow finish to the year and the dramatic difference in deal activity seen between H1 and H2 2022—show more variability. Geopolitical and economic uncertainties continue to be at play at the outset of the new year and may continue to affect how deal parties approach potential transactions.

Emily Rouleau
Legal Analyst
ANALYSIS: A Shift in Venture Debt Terms May Be on the Horizon
ANALYSIS: Private Equity Can Slow Down, But It Can’t Stop
ANALYSIS: 2023 M&A Market May Reveal a Return to Pre-2021 Levels
ANALYSIS: As Down Rounds Loom, VC-Backed Companies Have Options
ANALYSIS: All M&A Market Segments Saw Q3 Drop in Deal Volume
© 2023 Bloomberg Industry Group, Inc.
All Rights Reserved