The Bloomberg Law 2023 series previews the themes and topics that our legal analysts will be watching closely in 2023. Our Transactional analyses explore the trends and forces shaping key markets of interest in the year ahead.

Even in the face of economic difficulties and market challenges this year, private equity cycles forward. Buyouts have slowed to a trickle, exits have been harder, and, for many in the industry, fundraising has been more challenging. But the PE wheel keeps spinning, and will continue to do so in 2023—in part with the help of the over $1 trillion in unspent capital the industry has available to invest.

A Much Slower Year

Along with the broader M&A market, private equity deal activity, including on the venture capital side, has slowed considerably during 2022. Private equity controlling-stake M&A deal volume has fallen by 46% compared to last year.

A slowdown was almost inevitable. Even before the challenges posed by rising interest rates, inflation, and a looming recession, market players predicted less activity this year following last year’s break-neck PE deal pace, simply due to sheer exhaustion. But the current drop is clearly of a more serious nature.

One hit to deal volume has come via LBOs. Facing a difficulty or outright inability to secure financing for leveraged buyouts this year, these debt-financed deals—which were a key driver of overall PE M&A volume in 2021—fell sharply in the third quarter. As a result, despite an impressive roster of mega and very large PE buyouts announced earlier this year (e.g., the Citrix Systems, Inc., Nielsen Holdings PLC, and Atlantia SpA buyouts), the volume of all PE buyouts that have signed or closed this year is over 25% behind last year’s record total—regardless of financing type. And the number of these deals is over 30% behind last year’s count, which was the highest on record, according to Bloomberg data. 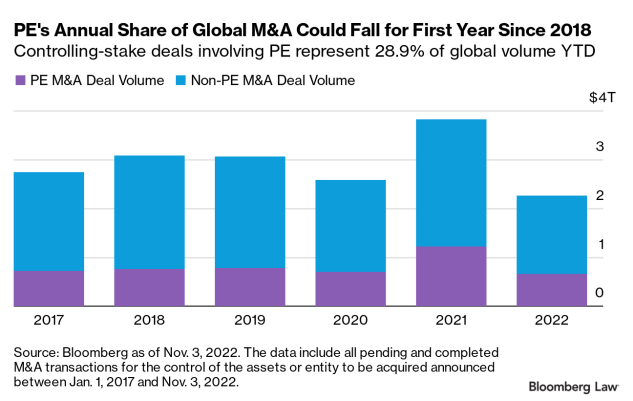 Another likely explanation for the hit to deal volume is that the typical exit routes for PE—the avenues for funds to cash out on their investments—have become more challenging or have closed off entirely.

For example, M&A exits (acquisitions of PE portfolio companies by non-PE entities) are more challenging under the current market conditions. And with lower valuations, higher interest rates, and higher volatility, the IPO exit option hasn’t been as attractive this year. As a result, there’s been a noticeable shift in exit strategies from traditional M&A and IPO exits to more secondary transaction exits, in which a PE firm buys out the portfolio company of another PE firm.

This year could be the first since 2018 that sees PE’s annual share of global M&A volume drop. Year to date, over 5,000 controlling-stake M&A deals with an aggregate value of $655.8 billion involving at least one private equity deal party have been signed. This volume represents 28.9% of all global controlling-stake M&A volume. Despite fluctuations in the overall M&A market, PE’s share of this market has risen steadily each year since 2018, and reached a high of 32.1% in last year’s record market.

The number of controlling-stake acquisitions signed this year by some of last year’s top PE acquirers illustrates this year’s slower activity. For example, major PE players Blackstone Inc. and KKR Group Co. Inc. have thus far engaged in fewer than half the acquisitions they made last year. 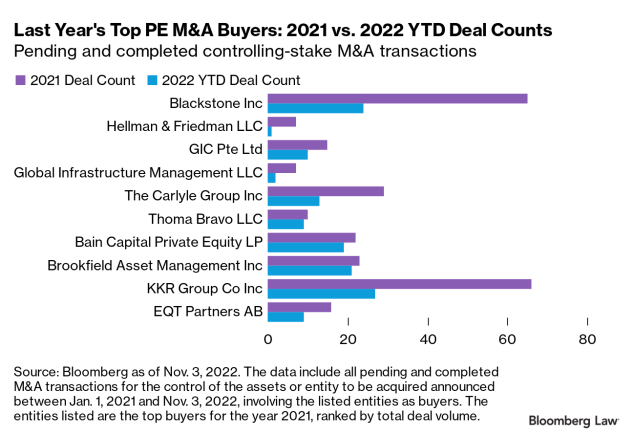 That being said, another takeaway from looking at the year-to-date activity among last year’s top buyers is that, overall, they haven’t stopped buying. A handful of the top buyers, such as Thoma Bravo LLC and Bain Capital Private Equity LP, are even already nearing their 2021 full-year total acquisition counts.

As put succintly by my colleague Jan-Henrik Foerster at Bloomberg News: “That dry powder is still there and it will be deployed. No financing? Use cash. No financing for big buyouts? Do smaller transactions or minority deals.” The PE deal playbook is adaptable and we’ve already seen bold fixes, however temporary (like all-equity buyouts) applied to push deals through since the start of the fourth quarter.

Since the start of Q4, 427 controlling-stake M&A deals involving at least one PE party with an aggregate value of $43.2 billion have been announced and are either pending in the period between signing and closing or have closed. Of these deals, 103 have been PE buyouts, valued at a total of $11.5 billion. And to the point about doing smaller deals: data for controlling-stake deals do indicate that the average deal size has been dropping quarter-to-quarter since the second quarter this year. In fact, fourth quarter deals thus far have the lowest average deal size since Q2 2020.

Bankers and PE advisers reportedly expect the pace of deals to increase in the new year, with take-privates and secondary transactions being an important source of flow. And PE has already begun to invest in industries, such as health and software, seen as better able to weather economic storms, a trend that will continue into 2023.

Though fundraising has been more difficult this year, PE fundraising has persisted. Year to date, funds launched this year pursuing a variety of strategies have raised roughly $230 billion, with the largest portion—nearly $90 billion—raised by buyout funds. 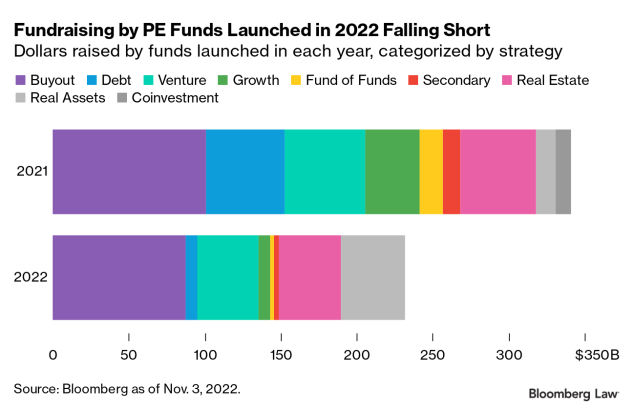 While this amount falls well short of 2021’s total of dollars raised by funds launched last year (which surpassed $340 billion), it’s a testament to the private equity cycle propelling itself forward. There’s a reason PE managers have gained a reputation for being “insatiable fund raisers.”

Commitments to investors, unspent capital, new funds launched, and exits that can’t be delayed will all propel private equity deal activity well into the new year.