The U.S. Soccer Federation paid more than $9.2 million over a one-year period to Latham & Watkins, a longtime legal adviser defending it in a high-profile equal pay dispute with U.S. women’s national team members.

The landmark gender discrimination case stemming from alleged pay disparities between men and women national team soccer players is now before the U.S. Court of Appeals for the Ninth Circuit. The federation and women’s players reached a partial settlement on other claims in their lawsuit, such as addressing alleged unequal working conditions.

The federation, a nonprofit that serves as the governing body for U.S. soccer, noted the fees to Latham and two other law firms in an annual financial statement filed Wednesday. The document—covering the period between April 1, 2020, and March 31, 2021—doesn’t itemize the types of legal matters handled by its outside counsel.

Morgan, Lewis & Bockius, which saw a partner provide testimony supporting the federation in the pay equity litigation, received nearly $2.2 million from the organization. The firm has advised the federation on labor negotiations with women’s players and counseled the National Women’s Soccer League.

Crowell & Moring was also paid about $1.1 million by the federation. The firm represented the organization in a trademark settlement in 2020 with the U.S. Soccer Foundation, a similarly named organization that focuses on promoting youth soccer.

Media representatives for the Chicago-based federation didn’t respond to requests for comment about the legal expenditures to Crowell, Latham, and Morgan Lewis. 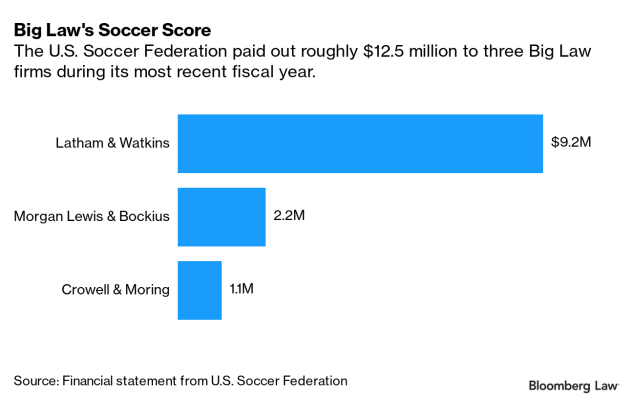 Karen Leetzow, a former legal chief for auto racing circuit Nascar Holdings Inc. hired by the federation in mid-2020 to serve as its chief legal officer, received more than $166,300 in total compensation. Her predecessor Lydia Wahlke, now of counsel at Kirkland & Ellis in Chicago, was paid a little over $337,000.

Wahlke was put on administrative leave by the federation in 2020 in the aftermath of a controversial brief filed by the body’s former lawyers at Seyfarth Shaw.

The filing, which was withdrawn, suggested that women players were paid less than their male counterparts because they had different physical attributes that made them less skilled than their male peers. It led to the resignation of the federation’s former leader Carlos Cordeiro, a former executive at the Goldman Sachs Group Inc.

Cordeiro, according to various media reports, is now trying to wrest back control of the federation from its current president, Cindy Parlow Cone, herself a former women’s national team player. The federation’s national council will vote March 5 on a new leader who will serve a four-year term.

Latham has longstanding ties to the federation and the world of professional soccer. Alan Rothenberg, a retired Latham partner, was once president of the federation and responsible for creating Major League Soccer, the top U.S. men’s league.

Rothenberg also played a key role in bringing the men’s and women’s World Cups to the U.S. during the 1990s. Latham was therefore a natural choice to replace Seyfarth in the equal pay litigation for the federation in 2020.

The women’s national team has won four World Cups, more than any other country.

The team is appealing a May 2020 decision by a federal district court judge in Los Angeles dismissing their compensation claims, citing a collective bargaining agreement. Winston & Strawn and Mayer Brown are representing women’s players.

Bloomberg Law reported last year that Williams & Connolly received almost $594,000 from the men’s national team during 2020, while the women’s team paid $226,000 to Washington’s Bredhoff & Kaiser, at least some of which was for collective bargaining work. Neither team has yet filed a 2021 financial statement with the Labor Department.

(Updates story throughout with more detail on lawyers and law firms for the federation and U.S. soccer players.)