The Big Law pay war is back on, thanks to Wall Street's Davis Polk.
Spencer Platt/Getty Images

Kirkland & Ellis, Paul Weiss Rifkind Wharton & Garrison, and Simpson Thacher & Bartlett are among the firms who announced Wednesday that they’re ratcheting up salaries on a scale that will see their most senior associates receiving $396,500 per year. The move—also announced by McDermott Will & Emery, Cleary Gottlieb Steen & Hamilton, Debevoise & Plimpton, Ropes & Gray and Dechert—matches Davis Polk’s new scale, which was announced by the Wall Street firm on Tuesday.

The salary increases come amid an increasingly competitive market for top talent among the top law firms, many of which reached new heights in revenue and profits in 2021.

Milbank got the salary war off to a running start in January, announcing a new salary scale increasing starting pay for first-year associates to $215,000 from $205,000. Second, third- and fourth-year associates saw their salaries jump $10,000, under that scale, while midlevel and senior associates saw a $20,000 jump.

Davis Polk came over the top on Tuesday, bumping up salaries from the Milbank scale for fourth through eighth year associates by 3%. 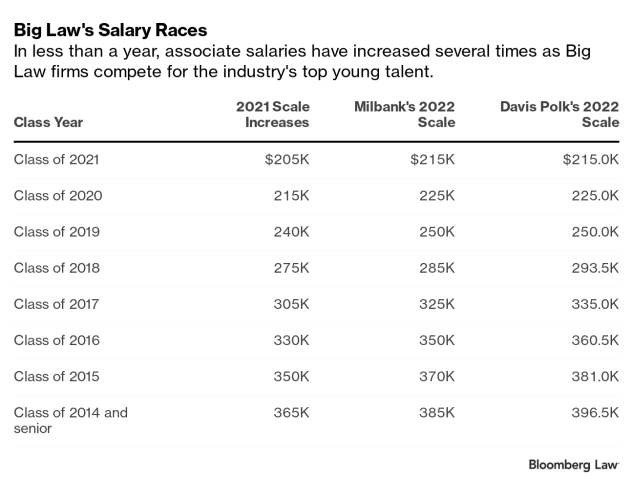 “As always, we are committed to paying top of market for our amazing talent and will continue to keep pace,” said McDermott chair Ira Coleman in a memo to the firm’s associates viewed by Bloomberg Law announcing the salary increases.

McDermott was previously one of a handful of law firms that said it would match Milbank’s salary scale.

“We view this as the baseline of our value proposition to you, even as we evolve and extend our platform as being the leading career accelerant in our profession,” Coleman said in the memo.

Paul Weiss chairman Brad Karp said that the firm will also be matching the new salary scale in a firm memo viewed by Bloomberg Law. Karp said additional bonus payments will be paid to counsel and associates who “made outsized contributions” for the firm and its clients during the second half of 2021, pursuant to its special bonus program announced last fall.

All firms noted that the changes would be retroactive to Jan. 1 of this year.

(Updated to add Simpson Thacher to the list of firms matching the new salary scale.)