The most senior associates receive $396,500, compared with Milbank’s $385,000, according to the memo viewed by Bloomberg Law. The increases are retroactive to Jan. 1, 2022 for associates in good standing as of March 15.

The announcement follows a year of large paydays for both law firms and their talent. Top law firms gave associates a series of bonus and salary increases as they sought to recruit top talent amid heightened demand, particularly in transactional practices.

“While rewarding all associates, this announcement sends a signal to the more experienced attorneys at the firm the value that they bring,” said Summer Eberhard, managing director in the associate practice group at recruiter Major Lindsey & Africa.

“It also reinforces what I am seeing in the lateral market as firms seem to be prioritizing experience more than they did last year,” she said. 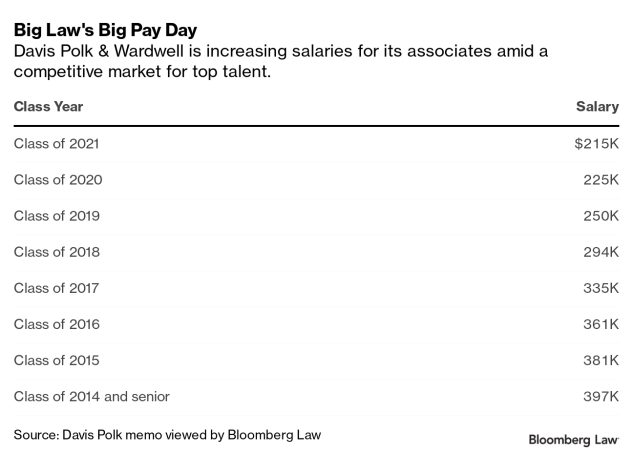 The new Davis Polk scale announced Tuesday matches the one set by Milbank in January for first- through third-year associates, which saw entry level salaries jump from $205,000 to $215,000.

The move makes Davis Polk one of only a handful of firms, including Fried Frank Harris Shriver & Jacobson, Cadwalader Wickersham & Taft, Goodwin Procter and McDermott Will & Emery, that said they would match Milbank.

“Many firms were waiting to see what the compensation leaders were going to do,” Eberhard said. “Now that one of those firms has made their move, I would anticipate that we will start to hear from other firms that traditionally have matched.”

Davis Polk has lately emerged as the compensation leader among Big Law firms. It upped Milbank’s salary increases last year and set the pace of associate bonuses, which saw some of Big Law’s most senior talent taking home over $200,000 in awards.