A poll worker hands a ballot to a voter at a polling place on Nov. 27, 2018, at Highland Colony Baptist Church in Ridgeland, Miss.
Photographer: Drew Angerer/Getty Images

A federal judge has denied a request to block unique Mississippi election rules that could result in this year’s tight governor’s race decided by the state House.

Chief District Judge Daniel Jordan III for the Southern District of Mississippi raised questions in his Nov. 1 order about the constitutionality of the statewide elections process in Mississippi, but those concerns were “outweighed by the harm a preliminary injunction would cause when the Court attempts to craft a new method for electing statewide officers on the eve of the election,” he said.

Mississippi Attorney General Jim Hood is one of the few Democrats elected to a statewide office in the Deep South, and his bid for governor was seen as a catalyst for the lawsuit challenging a provision in the state constitution that was enacted in the 1890s.

A candidate seeking statewide office in Mississippi must win a majority of House districts, not just the most votes. If not, the state House decides the election. The last time this happened was in the 1999 governor’s race, when Democrat Ronnie Musgrove won a majority of the votes but still needed the support of a Democratic-controlled House to be declared the winner. 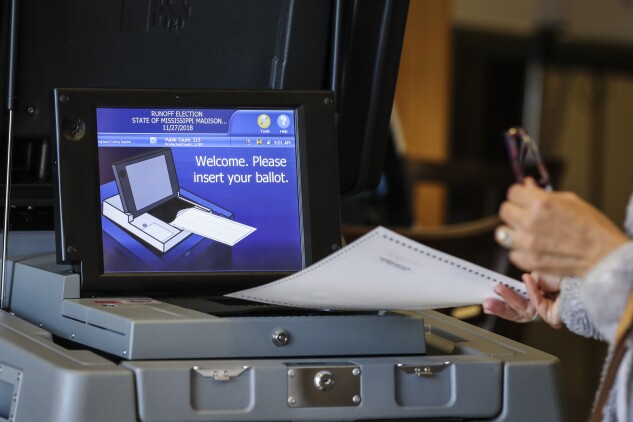 The provision aims to suppress black voters, according to a lawsuit filed May 30 by seven black voters. Attorneys for the plaintiffs sought a preliminary injunction to block state officials from enforcing those rules in the Nov. 5 election in which voters also will decide whether to choose Mississippi’s first black attorney general.

Mississippi’s secretary of state sought its dismissal, saying in court documents the lawsuit was “about partisan politics” and not about race.

Jordan heard oral arguments in the case Oct. 11. He said he would address a motion to dismiss the lawsuit by Mississippi Secretary of State Delbert Hosemann and Mississippi House Speaker Philip Gunn, both Republicans, in a separate order. Hosemann is also his party’s candidate for lieutenant governor in the Nov. 5 election.

Hood has said he supported changing the provision.

“The candidate with the most votes should win, period,” Hood told Bloomberg Government in July. “Every Mississippian’s vote should count. Those voters, not partisan politicians, should decide who they want to be their governor.”

Hood’s Republican opponent, Lt. Gov. Tate Reeves, has said little about the lawsuit, but he has sought to portray the Democrat as a “Washington liberal.” Reeves is supported by both current Gov. Phil Bryant (R) and President Donald Trump, who is holding a Nov. 1 rally in Tupelo.

The Mississippi Republican Party doesn’t object to removing the provision, spokeswoman Nicole Webb said in an emailed statement. But she questioned the political motives behind the lawsuit.

“If Eric Holder were sincere in his concern about this provision, he could have addressed it during the years he ran the U.S. Department of Justice. He did not,” Webb said. “It seems much more plausible, then, that this is a continuation of national Democrats’ attempts to delegitimize elections they do not win, rather than grapple with the fact that their leftist policies are out of step with the preferences of most Americans.”

To contact the editors responsible for this story: at krizzo@bgov.com; at lduggan@bgov.com