The release of wastewater from a reservoir at a former phosphate plant in Florida should serve as a wake-up call to deal with the potential disaster looming at similar sites across the country, says Jaclyn Lopez, of the Center for Biological Diversity. Congress and the EPA can take preventative action now, including banning the use of phosphogypsum—a radioactive waste byproduct from manufacturing fertilizer—in road construction and regulating it at the federal level, she says.

The near collapse of a radioactive, toxic phosphogypsum stack at Piney Point that discharged hundreds of millions of gallons of wastewater into Tampa Bay exposed one of Florida’s dirtiest secrets.

More than 1 billion tons of phosphogypsum is stored in 25 stacks scattered throughout Florida, and there are more than 70 phosphogypsum stacks in Arkansas, Idaho, Illinois, Iowa, Louisiana, Mississippi, Missouri, North Carolina, Texas, Utah, and Wyoming.

While Piney Point had a particularly well-documented and long history of regulatory failures, it is by no means an anomaly. Leaks, seeps, and discharges from phosphogypsum stacks across the U.S. have caused groundwater contamination and numerous sinkholes. And these incidents, many of which are in Black, Indigenous, and Latino (BIPOC) and/or low-wealth communities, show no sign of slowing despite the well-documented harm. 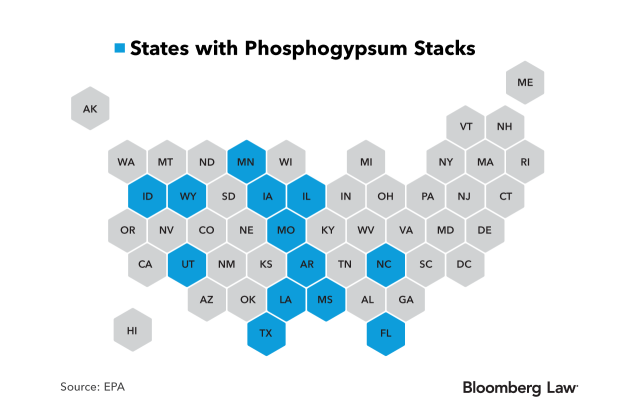 In 2019 authorities were alerted that the Louisiana’s Uncle Sam phosphogypsum stack was moving laterally and in danger of collapsing. In 2017, the Environmental Protection Agency designated the Mississippi Phosphates Corp.'s phosphogypsum stack a Superfund site. In 2016, a sinkhole in the New Wales phosphogypsum stack released 215 million gallons of process wastewater into the Floridan aquifer in Florida. In 2015, the EPA reached a $2 billion settlement with Mosaic Fertilizer LLC for commingling 60 billion pounds of hazardous waste in Florida and Louisiana.

How Is Phosphogypsum Not Regulated as Hazardous Waste?

Congress passed the Resource Conservation and Recovery Act (RCRA) in 1976 to address increasing problems associated with the growing volume of industrial waste. The RCRA’s goals are to reduce the generation of solid waste, ensure that waste is managed in an environmentally sound manner, and to protect human health and the environment.

However, in 1980, the Bevill Amendment to RCRA suspended the EPA’s authority to regulate phosphogypsum and process wastewater as hazardous until the completion of a study on the adverse human health and environmental effects.

A decade later, the EPA completed its study and found widespread groundwater contamination at phosphogypsum stacks, including contaminated off-site wells, the potential for drinking water source exposures, impacts to ground and surface waters, increased air pathway cancer risk for those living near stacks, and varied and inadequate state regulation. The report also found an increased hazard and contaminate release potential should the industry expand in the absence of hazardous waste regulation.

Nevertheless, citing the costs to the industry of complying with the hazardous waste program, the EPA decided the following year to exempt phosphogypsum and process wastewater from hazardous waste regulation.

What Can the EPA Do?

In February a coalition of 17 conservation and public health organizations petitioned the EPA for rulemaking pursuant to the RCRA and Toxic Substances Control Act (TSCA) concerning the regulation of phosphogypsum and process wastewater.

The administrative petition asks the EPA to issue a rule reversing its 1991 decision to exempt phosphogypsum and process wastewater from hazardous waste regulation, and to promulgate regulations governing its safe treatment, storage and disposal as hazardous wastes.

The final ask in the petition relates to the Trump administration’s approval of the use of phosphogypsum in road construction, which reverses a decades-old determination that phosphogypsum in roads presents an unreasonable risk to human health. This decision, if it is not reversed by the Biden administration or held unlawful by the D.C. Circuit where it is being litigated, will have long-lasting impacts to public health, clean air and water and biodiversity.

In the meantime, the petition asks the EPA to make a determination under TSCA that the use of phosphogypsum in road construction is a significant new use warranting review.

What Can Congress Do?

Congress could, of course, reverse the Bevill Amendment, or more narrowly amend the RCRA to require the EPA to treat phosphogypsum and process wastewater as hazardous waste. Short of that, it could hold a congressional hearing to investigate the regulatory framework of the phosphate industry and the failure to ensure protection of human health and the environment.

Congress should also identify areas where it can provide additional resources to help the EPA quickly and comprehensively address this problem.

For too long, the phosphate industry has been exempted from accepting responsibility for preventing and cleaning up its ever-expanding toxic crisis. Federal regulators and elected officials must end this toxic nightmare now or shoulder full responsibility for the potentially catastrophic events that lie ahead.

Jaclyn Lopez, Florida director at the Center for Biological Diversity, is an environmental and land-use lawyer who litigates in the Southeast. She focuses on protecting imperiled species and ecosystems, and has presented, written, and taught courses on environmental law and policy.