The EPA—not states—should regulate fertilizer waste storage sites, environmental groups say, pointing to problems like those in Florida where a leak in a reservoir wall nearly unleashed millions of gallons of wastewater.

Such pools sit atop huge piles of wastes generated by fertilizer production at about 70 sites across the country, including the Piney Point facility in Manatee County, Fla., near Tampa Bay.

The center and 16 other environmental groups in Florida, Louisiana, Texas, and other states petitioned the Environmental Protection Agency in February to regulate the wastes as hazardous under the Resource Conservation and Recovery Act.

The petition was filed under the Toxic Substances Control Act. It also asked the agency to use the chemical law’s authorities to evaluate health and environmental risks of phosphogypsum and process wastewater, which are generated by fertilizer production; to require companies to carry out new tests; and to prevent the waste from being reused.

“EPA is reviewing the petition and will respond as appropriate,” the agency said in an email. TSCA’s deadlines give the agency until early May to make a decision.

The 480-million-gallon Piney Point phosphate plant reservoir began leaking late last month, according to the state’s emergency order. A breach over the weekend prompted evacuation orders for more than 300 residents and a governor’s office declaration of a state of emergency, although the orders have since been lifted. 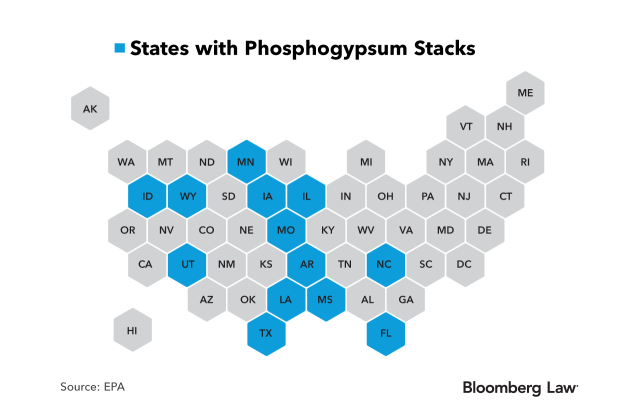 That doesn’t resolve the broader problem, Lopez said. If the reservoir that has threatened to flood areas near Florida’s Tampa Bay “isn’t a catastrophe, there will be another one,” she said.

But Kathy Mathers, vice president of public affairs for the Fertilizer Institute, said the Piney Point ponds “are not representative of modern phosphate fertilizer plant phosphogypsum stacks and pond systems,” which she said are tightly regulated and don’t need the additional controls that the petitioners are seeking.

Naturally occurring radioactive materials such as uranium, thorium, and radium can be in fertilizer waste, according to the EPA. Tests, however, have shown the pond’s water isn’t radioactive, state officials have said.

Instead, the primary concern has been about the spills’ potential to cause problems such as algae blooms, a widespread problem in many areas.

The potential environmental contamination from the evolving situation on Florida is deeply troubling, said Richard E. Engler, director of chemistry at the Bergeson & Campbell PC law firm, which wrote a commentary on the petition. But “TSCA is not an efficient way to manage the issue,” he said.

He cited the number of years it would take to get the wastes in the queue to be reviewed under TSCA and then regulated; their absence from the official list of chemicals that are or have been in U.S. commerce and subject to the chemicals law; and the possibility that the agency can’t ban the road-use of the material using the particular type of regulation that the petition seeks.

About five tons of phosphogypsum waste is produced for every ton of phosphoric acid that fertilizer manufacturers make to produce phosphate fertilizer, according to the EPA. The agency exempted the materials from RCRA regulation in a 1991 rule excluding other mining wastes.

Phosphogypsum can be used as a fertilizer if its radioactivity level is low enough, the EPA said. And last year, the agency approved a Fertilizer Institute request and allowed government road construction projects to use the material.

The Center for Biological Diversity is challenging that decisionin the U.S. Court of Appeals for the District of Columbia Circuit, and the petition asks the EPA to bar that use of the waste material.

Phosphogypsum and its related wastewater should be regulated under RCRA because their corrosive and toxic characteristics satisfy the statute’s hazardous waste criteria, the petitioners said.

They detailed problems at waste sites across the country, including three major reported sinkholes under phosphogypsum stacks in Florida since the EPA’s decision not to regulate the wastes in 1991.

They also included a Mobil Mining and Minerals Co. site near Pasadena, Texas, where a retaining wall failed and released 45 million gallons of waste into the Houston Ship Channel, killing millions of fish, and the “Uncle Sam” reservoir owned by the Mosaic Fertilizer, LLC, in Convent, La., which stores millions of gallons of process water and which has a retaining wall that’s been shifting since 2019.

But the Fertilizer Institute’s Mathers said “phosphate fertilizer facilities in Florida and other states manage their phosphogypsum stacks according to stringent state and federal regulations governing their design and operation, water treatment, liner and closure technical standards.” The institute detailed its opposition to the RCRA and TSCA rulemaking petition in comments submitted to the agency last month.

Local officials and residents panicked in 2019 when the pile of waste that blocked millions of gallons of wastewater in the Uncle Sam reservoir began to bulge, recalled Milton Cayette Jr., a member of RISE St. James, one of the groups petitioning the EPA for regulations.

“I think one day the whole thing will collapse. It would be a disaster,” he said.

Averting fertilizer waste disasters ahead of time through tighter regulations would be cheaper than spending millions of dollars fixing leaks, draining ponds, and shoring up walls when ponds begin to rupture, said Wilma Subra, president of the Subra Co., an environmental consulting firm that often works with communities dealing with industrial pollution.

Kristen Schlemmer, legal director for the Bayou City Waterkeeper in Texas, said scientific research shows improper management of phphosphogypsum and process water “poses a substantial present hazard and an unreasonable risk of injury” to humans and the environment.

“Piney Point is an example of this unfolding before our eyes,” she said. “The EPA must take action.”