A health worker wears personal protective equipment in a lab during clinical trials for a Covid-19 vaccine at Research Centers of America in Hollywood, Fla., on Sept. 9, 2020.
Photographer: Eva Marie Uzcategui/Bloomberg

Even without a Covid-19 health-care standard to enforce, OSHA has inspected more hospitals and nursing homes in the first six months of 2022 than it did for all of 2021, agency enforcement numbers show.

The US Occupational Safety and Health Administration had inspected 577 general and psychiatric hospitals through June 3, compared with 332 for the entirety of 2021, a Bloomberg Law analysis found. OSHA so far in 2022 also inspected 729 nursing homes and assisted living facilities, up from 442 in 2021.

Most of this year’s inspections came after the agency on March 8 announced a Covid-19 inspection initiative aimed at health-care facilities that previously had been cited for Covid-related violations or issued a hazard alert warning letter.

In a written statement to Bloomberg Law, OSHA said the program won’t be extended, but the agency will “continue to use every tool at our disposal” to ensure employers are protecting workers.

Employers were expecting OSHA visits and had been preparing.

“This has not been under the radar for health-care providers,” Roslyne Schulman, director of policy at the American Hospital Association, said of the inspection push.

There hasn’t been a similar boost in health-care inspections among the 22 states with their own occupational safety and health enforcement powers for private employers, such as California and Michigan. States in 2022 had visited 83 general hospitals, compared to 311 for 2021.

OSHA inspections among other industries where Covid-19 infections were a significant concern remain about the same as 2021. Among food processors, OSHA has opened 366 inspections in 2022, putting the agency on pace to match its 2021 total of 754 inspections. The agency has inspected 500 retail sites in 2022, compared to 1,043 for all of 2021.

It’s unclear how many of the federal OSHA inspections in 2022 will result in findings of violations. OSHA has up to six months to issue a citation from when a violation occurred, so citations from the initiative may continue be issued into early November.

OSHA said a “high number” of inspections found employers in compliance. When citations have been issued, many were for violations of respiratory protection regulations, like having a program to provide respirators such as N95 face coverings to employees and testing the fit of the masks. 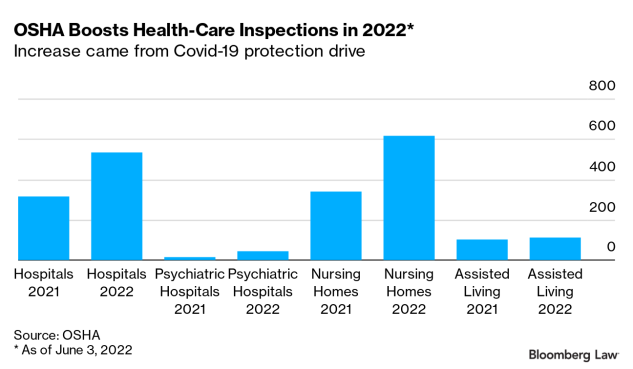 ‘Will Not Let Up’

“The fact that OSHA implemented its inspection initiatives shows that the agency will not let up on its enforcement in this area, despite the fact that OSHA currently lives in limbo between the emergency temporary standard and a permanent standard,” said Scott Hecker, a senior counsel with Seyfarth Shaw LLP in Washington.

OSHA officials have repeatedly said the agency will issue a permanent standard for health-care in 2022. While text of the proposed permanent standard hasn’t been released, it’s expected to generally follow the requirements of the now-lapsed temporary standard.

“OSHA still needs to support its position that a permanent health-care standard is needed, so they need to show violations are still occurring to support the regulation,” she said.

The agency enacted its health-care emergency standard in June 2021. When OSHA in December failed to meet a six-month deadline to issue a permanent standard, the agency stopped citing employers for violating the standard’s provisions, except for recordkeeping requirements.

OSHA could still enforce long-standing rules for respiratory protections, such as the use of N95 respirators, sanitation, and the general duty clause that requires employers to provide workplaces free of potentially fatal hazards that can be mitigated.

Such measures may include restricting buildings to only screened patients and staff, social distancing at common areas such as floor desks, upgrading ventilation systems to filter out the virus, requiring masks for unvaccinated workers, and paying workers for days missed because they were quarantined for potential Covid-19 exposure. Vaccinations weren’t mandated.

For the new regulation, the agency is considering how much the final rule should align with guidance from the Centers for Disease Control and Prevention, and how to allow employers to incorporate CDC guidance issued after the rule is enacted. One idea OSHA raised is declaring that employers following the CDC guidance at the time of an inspection wouldn’t be cited for not adhering to older guidance specified in the standard.

Since the lapse of the temporary standard, Jackson Lewis PC is seeing OSHA placing more emphasis on the existing standards than on general duty clause issues, said Catherine Cano, a principal with the firm in Omaha, Neb.

But employers are concerned that OSHA would use the general duty clause to cite them if they decided not to follow the provisions of the lapsed emergency standard, Cano said.

OSHA officials insist that health-care providers who continued to adhere to the temporary standard wouldn’t be cited for general duty clause violations.

Ramchandani-Raj said several clients reported that inspectors making return visits were evaluating the same documentation as they did in previous inspections, and inspectors have been seeking employee vaccination documentation even though no OSHA standard addresses vaccination.

“Inspectors asking for vaccination documents may not be entitled to these documents through the general duty clause, especially now since the Centers for Disease Control and Prevention is not relying on vaccination status for masking or other protective measures,” Ramchandani-Raj said. “Many employers are pushing back on providing this information to OSHA claiming it is not relevant.”

(Updated to include comments from OSHA.)