A mixed verdict over the depiction of wrestler Randy Orton’s tattoo in a video game embodies the legal uncertainty and courts’ mixed messages in a complicated area of copyright law.

World Wrestling Entertainment Inc. and Take-Two Interactive Software Inc. should pay tattoo artist Catherine Alexander $3,750, a jury in the US District Court for the Southern District of Illinois said Sept. 30. The court’s rejection of a fair-use defense, the paltry award, and superficially inconsistent rulings in other cases leave rights, obligations, and best practices unclear for artists and video game-makers alike.

The result could drive a shift toward game-makers deciding that acquiring—or having celebrities acquire—licenses to display tattoos would be more palatable than repeated courtroom battles over unsettled law.

VIDEO: Prince, Andy Warhol, and Fair Use at the Supreme Court

After the verdict, attorneys said artists may want to keep litigation award expectations in check. But they also said video-game makers may want to ensure they have licenses to tattoos they reproduce to stave off expensive litigation that may be difficult to escape before trial.

“It really comes down to risk tolerance” for the gamemakers, Van Kirk said. 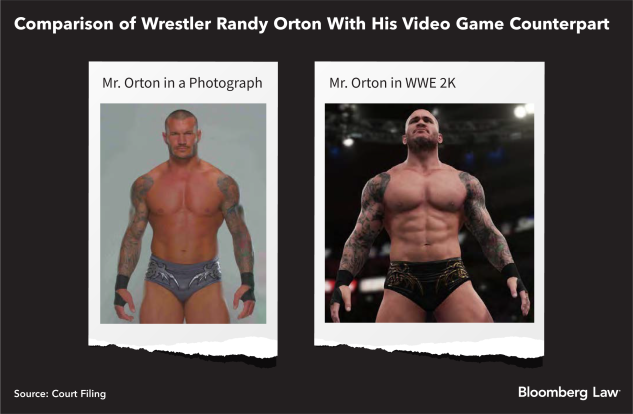 Owen Sloane of Eisner LLP acknowledged that reasonable minds can come to differing legal conclusions about the respective rights, even in similar circumstances. He said the rejection of WWE’s fair use defense could make taking a conservative approach more appealing.

“Even though it’s not precedential, it certainly gives artists the initial leverage to negotiate a better deal,” Sloane said. “I think it will change business practices.”

Tattoo artists, meanwhile, will need to contemplate when to litigate, what to charge for a license, and whether exposure or keeping clients happy might be worth more.

The tattoos depicted in that game weren’t substantially similar, as they were barely recognizable in game-play, Judge Laura Taylor Swain said. Even if they were similar, the use was “de minimis” as they made up a tiny fraction of the game. She also ruled tattoo artists grant customers an implied license to display the tattoo—and to package it as part of their overall image rights to entities like video-game companies.

But at least two other courts have now forced Take-Two to defend depicting tattoos at trial, where juries are especially unpredictable. Another suit over NBA 2K in Ohio—also involving tattoos depicted on James and other players—is planned for spring 2023. And the September WWE tattoo trial in Illinois showed a fair use defense isn’t impervious.

“It certainly causes a new level of risk for video-game makers. It goes to show you that the safest route from their shoes is to do rights clearances and get a license if there’s any concern,” intellectual property attorney Mark T. Doerr of Greenspoon Marder LLP said. “This will open the door to follow-on suits.”

Doerr called the implied license defense for game-makers “a good argument,” as “it’s presumed a tattoo artist understands that person is going to be walking around and the tattoo displayed publicly.” But courts haven’t universally held as much, leaving litigation risk, he said. And tattoo artists know litigation costs will far outstrip the cost of a license—and may outstrip a potential award to an artist.

The uncertainty in court might lead video-game makers like Take-Two, facing increasing demands for realism, to prefer the legal certainty of acquiring licenses. Sloane likened the potential emerging market to that of posters, art, and other copyright-protected matter in the background of films or TV shows, where producers often spend a few hundred dollars to nip potential litigation in the bud.

“Basically, it’s a business decision whether you take the risk, but it seems to me the conservative approach is to secure a license. And it seems you could secure one for fairly minimal amount,” Sloane said. “If it became standard business practice, I don’t think the amount would be nearly $3,500.”

Attorneys said video-game makers have another outlet to secure rights, or at least jettison risk: the athletes and celebrities themselves. Companies could, as part of publicity rights contracts, require the celebrity to affirm they have the right to license the entirety of their image—including tattoos. If someone sues, that contract could put the athlete on the hook for any payouts to artists.

“If the video-game company is smart, they’d probably want to get a warrant that there aren’t any third-party rights to use their identity,” Van Kirk said.

Sloane also said game companies “could rightly ask the person who’s being paid for name-image-likeness to clear the rights.” Such deals are generally worth enough money that gamemakers could compel the celebrity to “buy off the right to display in this context from the tattoo artist.”

Some tattoo artists might view signing away the rights to a celebrity a lost opportunity for income from game-makers, but others might view allowing free use in games as great for exposure, attorneys said. Artists also might not want to play hardball with celebrities and jeopardize their customer relationships or potential future business.

“What’s more important to them: Enforcing intellectual property rights or getting the benefit of the free marketing?” she said.

“You can simply embrace the use, and point to that as one of your really great pieces of artwork. Or you could sue and raise a big claim. That itself may be damaging to their business, and celebrities may not want to go to them,” Van Kirk said.