Laws against bad-faith demands meant to coerce patent payments from businesses face one of their first big legal tests, which could signal how far more than 30 states can go in enforcing them.

Washington state’s suit against Landmark Technology A is a “really good test case” for state attorneys general enforcing the laws, all of which have been passed in just the past eight years, said Rachael Lamkin, founder of Lamkin IP Defense.

Landmark has removed the case to federal court in Seattle, where it is still in the initial stages.

“I suspect a lot of AGs are watching it,” Lamkin said. “If they prevail, I think other AGs will follow suit.”

Still, the state laws themselves are surrounded by constitutional questions. And the U.S. Court of Appeals for the Federal Circuit—the nation’s top patent court—has taken an expansive view of the immunity that patent owners enjoy from such claims.

“At the end of the day, Federal Circuit law on the books imposes a really high barrier on anybody who wants to try to sue a patent owner for asserting their patent rights,” Temple law professor Paul Gugliuzza said.

Vermont passed the first law against abusive patent practices in 2013, responding to concerns about licensing entities that don’t make products but demand patent licensing fees from other companies. The laws generally target entities that make aggressive, high-volume demands in bad faith and try to extract quick settlements on suspect patents.

Vermont’s law outlined different factors to determine whether a patent assertion was made in bad faith. 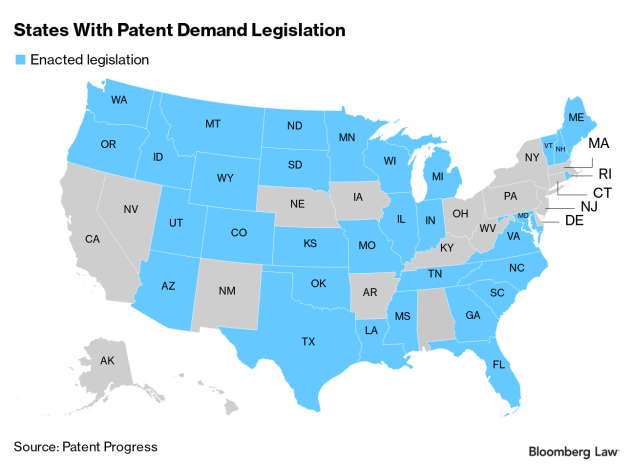 More than 30 other states have since enacted similar measures, according to Patent Progress, a Computer & Communications Industry Association blog that tracks the legislation.

The lawsuit brought by Washington Attorney General Bob Ferguson (D) seeks an injunction to prevent Landmark from enforcing its patent and restitution for businesses that have paid Landmark licensing fees. It is believed to be among the first brought by a state’s top law enforcement officer under a bad-faith patents statute.

Landmark, based in North Carolina, makes money from patent licensing fees, rather than from making products, according to the Washington attorney general’s office. The company sent almost 1,900 demand letters to businesses during a recent 18-month span, the office said.

It’s unclear how much Landmark and its predecessor, which have filed almost 100 lawsuits since 2008, have collected in licensing fees. Landmark has yet to respond to the Washington suit, and its lawyer didn’t immediately respond to a request for comment.

In a parallel case, Landmark challenged the constitutionality of North Carolina’s bad faith assertion law, the Abusive Patent Assertions Act, after Landmark was sued in January in federal district court in Winston-Salem by Napco Inc., a maker of custom packaging that received one of Landmark’s demand letters.

Landmark argues that the law is preempted by federal patent law and invalid under the Constitution’s Supremacy Clause. It also contends the law forces patent owners to engage in certain forms of speech, violating the First Amendment.

The law “facially compels patent owners to provide pre-suit ‘mandatory disclosures,’ or risk liability. As such, it violates the First Amendment,” Landmark said in a brief.

In an amicus brief defending Napco, SAS Institute Inc., , and other companies said entities like Landmark are part of the “dark underbelly of the patent system” and are largely responsible for “the evils of abusive patent assertions.”

The companies told the court its ruling could impact state laws around the country.

Landmark responded in a June 11 brief, saying, “virtually all of the policy assertions advanced by amici are problematic, and are deeply contested in the scholarly literature. As such, they do not support the validity, or the application to this case, of the facially flawed and overreaching North Carolina Act.”

Landmark has put state laws under the constitutional microscope before.

It challenged Oregon’s statute in a case against Azure Farms, an organic farm outside Portland. Landmark won a preliminary round, convincing a magistrate judge the law was unconstitutional. But a district court judge refused to strike down the law in a 2020 ruling. The case later settled.

While other state laws could be challenged with similar arguments, Joshua Landau, patent counsel at CCIA, said he “wouldn’t anticipate them being struck down broadly.”

But the Federal Circuit has said that in order for an assertion of patent infringement to expose the patent owner to civil liability, the assertion must be both “objectively baseless” and brought in bad faith.

“To prove that somebody is wrong and knew they were wrong is a lot to prove,” said Amanda Tessar, a Perkins Coie LLP patent litigation partner.

Federal Circuit precedent “basically allows a patentee to say whatever it wants in the demand letter, so long as the actual claims of infringement aren’t entirely far-fetched,” Gugliuzza said.

To be sure, attorneys say bad faith assertion laws can still give businesses some leverage when they receive a licensing demand, potentially facilitating settlements. The possibility of penalties can also discourage licensing entities from embarking on large-scale licensing campaigns, attorneys said.

They note fewer examples of widespread campaigns like MPHJ Technology, a licensing entity that sent thousands of letters over computer scanning technology and is widely seen as part of the driving force behind many states’ adoption of these laws.

Some advocates of patent reform say regulating patent demand letters would be better left to the federal government.

Congress has considered a federal law, and a House subcommittee held a hearing on the issue in 2015. The Targeting Rogue and Opaque Letters Act, TROL Act, was reintroduced in January by Rep. Michael Burgess (R-Texas). The legislation would preempt state laws on patent assertion letters.

If federal lawmakers don’t eventually step in and pass such legislation, Akron law professor Camilla Hrdy suggested state statutes could also be vulnerable to challenge under the Constitution’s Intellectual Property Clause, which gives Congress the power to secure inventors’ “exclusive right” to their discoveries.

“I love what these laws are doing. I think it only improves the quality of the system,” Hrdy said. “I just don’t think that states are the ones that should be doing it.”

To contact the editors responsible for this story: at kperine@bloomberglaw.com; at ghenderson@bloombergindustry.com