A series of head-turning damages awards in patent infringement cases against companies including and may spur additional investment in intellectual property portfolios.

The award is one of several initial damages awards topping $100 million—and totaling over $5 billion—that have been issued during the past 12 months. Jurors said Apple and owe the California Institute of Technology $1.1 billion for infringing patents on Wi-Fi technology.

At least some of the awards will likely be reduced or thrown out on appeal, or the cases settled for a lower amount—but their initial size has drawn attention from litigation financiers and investment groups.

“If you look at some of the verdicts that have come out, even over the past few weeks, you’re looking at nine figures, billions of dollars in verdicts,” Joshua Harris, a vice president at Burford Capital, said during a recent webinar on patent litigation finance.

“These are the kind of numbers where folks say, ‘That could make for an attractive investment if we are putting in $5, $10, $15 million dollars,’” Harris said.

The big awards may be the result of a variety of factors. Some attorneys believecompanies may have become overconfident in their ability to beat infringement lawsuits, in part by challenging patents at the Patent Trial and Appeal Board. 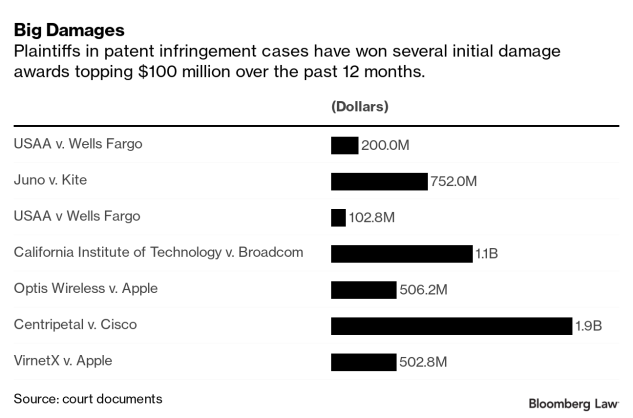 Patents have piqued the interest of investors, including hedge funds and private equity firms, looking for recession-proof assets that would retain their value in an economic downturn. Allied Security Trust, which tracks patent transactions, found the first part of 2020 saw the highest quarterly deal total in recent years.

Litigation financiers have also been taking a hard look at patents, according to a 2019 Bloomberg Law survey of litigation finance companies, law firms, and in-house counsel. The only practice area that generated more interest was commercial litigation.

Lu also said that behind some of the large awards are positive signals to patent owners from courts.

In the case between Apple and CalTech, jurors could consider factors like comparable licenses and the value that the invention contributed to the product, when determining a royalty. Plaintiffs typically prefer that approach because it can lead to higher awards.

“Similarly, the court ruling in Centripetal v. Cisco may indicate that triple damages can be real for willful infringement,” Lu said. Triple damages are the maximum amount allowed when the plaintiff proves the defendant willfully infringed the patents.

Less than seven months after the $1.1 billion CalTech verdict, Apple found itself on the wrong end of a nine-figure patent award, when a Texas jury said it owed PanOptis Wireless Technology royalties on 4G technologies used in the iPhone and other devices.

“Technology is increasingly valuable in the United States,” said Jason Sheasby, a partner at Irell & Manella LLP. The Southern California-based law firm led the trials wins for USAA and PanOptis, along with Juno and Sloan-Kettering.

A common thread through the recent cases has been that they involve premium products, either in the high-tech or pharmaceutical industries.

“When you have an infringement incident that occurs in those industries, usually the volume of sales when you start calculating damages are also huge,” said Mark Stallion, leader of the intellectual property and patent teams at Greensfelder Hemker & Gale PC.

Lowenstein suggested some companies may also have become “a bit brazen,” willing to roll the dice in litigation and risk a higher penalty, rather than sit down at the negotiating table, because they are confident they can beat infringement lawsuits.

Kite similarly wasn’t blindsided by the patent, having unsuccessfully challenged its validity in inter partes review at the Patent Trial and Appeal Board two years before the infringement case began.

Companies’ confidence in litigation, Lowenstein said, could be partly fueled by Patent Trial and Appeal Board success rates. Eighty percent of patents that have gone through a full review at the board have had at least at least one claim found invalid, according to patent office statistics.

Defendants have also had success in court arguing that patents cover only abstract ideas in the years since the U.S. Supreme Court’s decision in Alice v. CLS Bank, which invalidated a computer software patent.

“I think they’ve come to overestimate their odds of success. And I think it’s come back to bite them,” Lowenstein said.

Billion dollar verdicts are rare - there have only been nine ever in the U.S. All but one have come since 2007, perhaps reflecting technology’s value.

Amy Landers, a law professor and director of the IP law program at Drexel University in Philadelphia, said it was also around that time the damages law began to crystallize and people became more sophisticated about the value of patents, with the help of empirical analysis.

“There is more data about which patents are valuable and which ones are more likely to do well at trial, or are indeed more valuable and therefore makes sense to take it to a jury verdict,” Landers said.

How companies respond to the awards will depend on the strategies of particular companies. Apple, for example, has a track-record of aggressively fighting cases that it’s lost.

Apple and Broadcom, along with Juno, are already mounting appeals to the U.S. Court of Appeals for the Federal Circuit, which hasn’t been bashful when it comes to tossing high-value verdicts, or ordering retrials on damages.

In November 2019, the court vacated VirnetX Holding Corp.’s $503 million win against Apple and ordered a new damages trial. The trial ended last week in the U.S. District Court for the Eastern District of Texas with VirnetX winning a nearly identical amount.

Still, Stallion said large verdicts may cause some companies to do “a little bit of a stutter-step” when approached by patent owners.

Burford Capital’s Harris said even if the awards are trimmed, “at the end of the day—even if that is five, six years from now after all the appeals are finished - a multimillion—dollar jury verdict looks fairly appealing.”