An unauthorized musical production inspired by the hit Netflix TV show “Bridgerton” and a Texas church’s rendition of award-winning Broadway show “Hamilton” are pushing the boundaries of performance rights and the “fair use” copyright defense.

While copyright law generally allows artists to put their own spins on pieces of pop culture without licensing the original work, both productions appear to lack a nonprofit motive, as well as originality that would distinguish them enough to avoid copyright infringement.

The July 26 one-night run of “The Unofficial Bridgerton Musical Album Live in Concert” prompted a Netflix lawsuit when it debuted at the Kennedy Center in Washington. Songwriter and performer duo Abigail Barlow and Emily Bear, who originally rose to fame on the TikTok short-video platform, created the show and previously produced a Grammy-winning recorded album of their songs inspired by the Regency-era drama.

Separately, The Door Christian Fellowship Ministries of McAllen, Texas, presented a live-streamed production of “Hamilton” on Aug. 5 that altered several song lyrics and ended with a sermon that included anti-LGBTQ language, with a second show planned Aug. 6. The production prompted “Hamilton” creator Lin-Manuel Miranda to call for lawyers to “do their work” regarding the “illegal, unauthorized production,” though the church claims to have secured permission.

The “Hamilton” team ultimately granted limited permission for the church to perform the second night of the show as long as it wasn’t streamed and no recordings or photos were posted online. 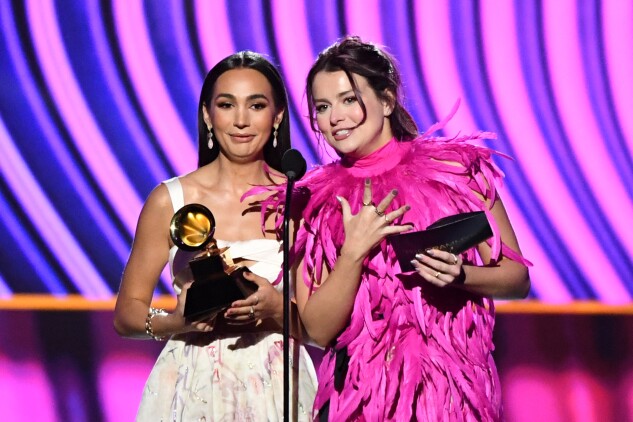 Emily Bear and Abigail Barlow, accept the award for composers/lyricists for “The Unofficial Bridgerton Musical” during the 64th Annual Grammy Awards pre-telecast show in Las Vegas on April 3, 2022.
Photo by VALERIE MACON/AFP via Getty Images

“The clear thread tying the two together is that they both involve second comers looking to profit from a culturally and financially successful show (Broadway and Netflix) in the name of fair use,” Jeannette Maurer Carmadella, a Lutzker & Lutzker LLP partner who specializes in brand protection, said in an email. “The two uses go way beyond the purpose and intent of the fair use doctrine.”

Fair use permits the limited borrowing of copyright-protected material without permission from the work’s owner, particularly when the original material is given a new or “transformative” meaning. While the concept sounds straightforward enough, the ways in which it applies depend on the facts of each case. The lines can blur quickly.

WATCH: Prince, Andy Warhol, and Fair Use at the Supreme Court

For example, the US Supreme Court is currently deciding whether an Andy Warhol print used on a Vanity Fair magazine cover infringed a photo of the musical artist Prince shot for Newsweek by photographer Lynn Goldsmith. The Warhol Foundation argues that the print was fair use because the colorized version added new meaning to the original photo.

2. How does fair use apply here?

In the “Bridgerton” musical production’s case, a fair use defense could cover putting the show’s characters into new situations not explored on screen, giving them fresh dialogue, offering insight into their imagined inner lives, or even poking fun at the show’s tropes through a parody. But according to Netflix, Barlow and Bear didn’t do enough to make the musical numbers their own.

In the lawsuit, Netflix wrote that the duo “copied verbatim dialogue, character traits and expression, and other elements from Bridgerton the series” in a way that isn’t protected. According to Netflix, the similarities between Barlow and Bear’s show and an official Netflix “Queen’s Ball” live experience in D.C. could potentially diminish the commercial market for the Netflix event—another factor evaluated under a fair-use analysis.

While The Door McAllen’s altered dialogue in “Hamilton” stoked controversy on social media, the church also may not have changed enough of the original production’s content for it to be considered fair use. Superficial or minor changes—especially when they aren’t commenting on or otherwise transforming the original work—generally don’t rise to the level required by the doctrine.

3. Does fair use cover fan works?

While copyright law does include exceptions for derivative works, they typically can’t be aimed at making money.

Noncommercial works of fan fiction that borrow from existing characters and worlds are generally covered under fair use, but the fact that Barlow and Bear sold tickets to their Kennedy Center show for as much as $149 likely weakens their fair-use defense. The duo also has a messy history with Netflix, which refused to bless their studio album and warned them not to perform its songs live outside of a specific charity show, according to the lawsuit. The complaint also noted that Barlow and Bear refused a live-performance licensing deal Netflix offered. 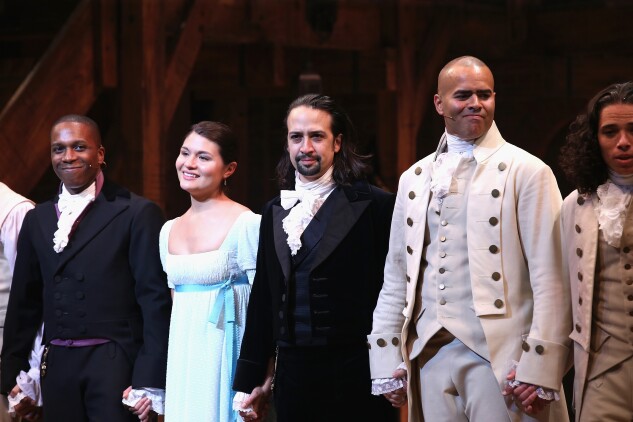 Lin Manuel-Miranda and the cast of “Hamilton” during the curtain call at opening night at Richard Rodgers Theatre on August 6, 2015 in New York City.
Photo by Neilson Barnard/Getty Images

4. What about church productions?

Some copyright exclusions also cover live music performed in churches. But The Door McAllen would have needed upfront authorization from the “Hamilton” creators to reproduce a dramatic work and make it available online. The church—which previously performed plays based on movies like “Elf,” “Despicable Me,” and “Toy Story"—reportedly said it secured such rights, but Miranda challenged that narrative on Twitter.

The fact that The Door McAllen ticketed the event, advertised it online, and live-streamed it—arguably competing with the official filmed version on Disney+—likely exceeds the bounds of any church-related copyright exemptions.

A copyright holder isn’t obligated to take immediate action when they see a potentially infringing use of their work. This means Netflix didn’t compromise its right to sue down the road by tacitly allowing the “Bridgerton” album to release on streaming. Nor did its initial tweeted support for the TikTok project negate its ability to object later.

Absolutely blown away by the Bridgerton musical playing out on TikTok

Barlow and Bear could still launch an estoppel defense, arguing that they’ve been unduly harmed by Netflix’s acquiescence, but that argument is rarely successful, attorneys say. Barlow, Bear, and their counsel didn’t respond to requests for comment.

To contact the reporter on this story: in Washington at kgriffis@bloombergindustry.com