So when a judge delivered a surprise ruling this week ordering the pipeline to shut until further environmental reviews are conducted, Warren flashed the pugnacious, bare-knuckled approach that has made him -- and the project -- a source of seemingly never-ending controversy in America.

His company, Energy Transfer LP, announced Wednesday it will press on with operating the pipeline, despite the order to stop the oil from flowing by an Aug. 5 deadline. The company said it would from producers in the Bakken shale field looking to ship oil on the pipeline next month while it appealed the ruling.

It was, to Warren’s enemies in the indigenous community and conservation circles, an incendiary statement that would only add to the bitterness remaining four years after the project stoked weeks of protests at the Standing Rock reservation in North Dakota.

To his supporters, it was classic Warren: The 64-year-old CEO, a fund-raiser for President Donald Trump, has adopted a relentlessly aggressive approach to building pipelines that get the nation’s enormous oil and natural gas reserves to market. While that helped him create a corporate giant, and a $3.1 billion fortune, the pipeline industry is increasingly in the cross-hairs of an environmental movement seeking to keep fossil fuels in the ground.

“Energy Transfer has taken the view that if you want to get anything built or done in this current regulatory environment, you have to be aggressive,” said Hinds Howard, a portfolio manager at CBRE Clarion Securities LLC. “It’s a strategy and a corporate culture that’s maybe out-of-step with the times.”

The decision by the U.S. District Court for the District of Columbia was one of three major blows to the U.S. pipeline industry in the space of 24 hours. On Sunday, developers of the Atlantic Coast gas pipeline canceled the project due to escalating costs and delays. The next day, the Supreme Court stood by a lower court’s decision blocking a key permit for TC Energy’s Keystone XL oil-sands pipeline.

But the ruling on the 1,172-mile (1,886-kilometer) Dakota Access, which shuttles crude from North Dakota to Illinois, was perhaps the most shocking development of all because it ordered an operational pipeline to shut, something that’s never been done before for a violation of the National Environmental Policy Act.

Dallas-based Energy Transfer said it believes Judge “exceeded his authority and does not have the jurisdiction to shut down the pipeline or stop the flow of crude oil.” The company has asked the district court to freeze its order, pressing Boasberg to stay his “literally unprecedented” decision until an appeals court can weigh in. (Energy Transfer clarified later on Wednesday that it has no intention of flouting the judge’s order and instead is taking the dispute to court.)

The company took aim at both the impacts of the judge’s shutdown order and his underlying conclusion that federal approval for Dakota Access violated environmental law. Energy Transfer also argues that legal precedent suggests Boasberg’s shutdown order went a step too far. 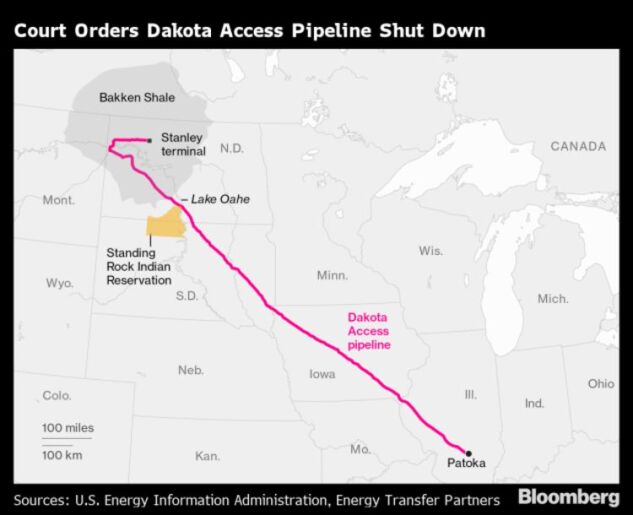 Energy policy analysts are divided on the prospects for a quick resolution in court. Height Securities LLC said the case in front of the D.C. Circuit Court of Appeals “appears weighted in favor of” Energy Transfer, since cases used to justify the decision didn’t involve active, operating pipelines.

Rapidan Energy Group is less sure. The appeals court has repeatedly blocked Trump administration efforts to expedite energy environmental analyses, and Boasberg relied heavily on its past D.C. Circuit rulings in concluding that the Army Corps’ environmental review was insufficient. Both factors make it less likely the appeals court will issue a temporary stay of the shutdown order, the policy group advised clients.

“I like their chances on appeal better than on the stays,” said , an analyst for Bloomberg Intelligence. But the prospect of a successful appeal remains “up in the air,” he said.

When it comes to Dakota Access, Energy Transfer has a wild card to play: Its cheerleader in the White House. Trump, who owned Energy Transfer Partners stock before winning the general election, has sought to boost Dakota Access and other pipelines since his first week in office. On his fourth full day as president, Trump signed a pair of executive orders to support the sector, including a directive mandating federal regulators reconsider their earlier decision to conduct deep environmental scrutiny of Dakota Access.

Warren last month hosted Trump’s first in-person fundraiser since the coronavirus outbreak locked down much of the country in March. Former U.S. Energy Secretary sits on the board of directors of the so-called general partner that controls Energy Transfer, an arrangement that Democratic Senator Elizabeth Warren has said represents “the kind of unethical, revolving-door corruption that has made Americans cynical and distrustful of the federal government.”

Still, it’s unclear whether there’s much Trump can do to save Dakota Access from the coming legal battle. “The Trump administration’s tools are somewhat limited” outside of the courts, Height Securities LLC analyst said.

Energy Transfer has embarked on bold legal strategies in the past. The company took the unusual step of suing the Obama administration when it slow-walked a final permit for Dakota Access, and has pushed states to criminalize protests near pipelines, chemical plants and other infrastructure.

In 2017, Energy Transfer filed an aggressive lawsuit against protesters, accusing Greenpeace and other groups of operating a criminal network aimed at destroying legitimate businesses. A federal court later tossed the claims. When asked on a conference call last year whether that marked the end of the company’s Dakota Access legal fights, Warren replied it wasn’t.

“At times, they’ve had an aggressive approach to pipeline opponents, as well as adverse decisions from court and government,” said , a professor at Southern Methodist University’s Dedman School of Law. “They would say they got results. They got Dakota Access built.”