The Jordan Cove LNG project would cross about 750 acres of old-growth forest, habitat for endangered species like the marbled murrelet, shown here on the Oregon coast.
Photographer: Roy W. Lowe/USFWS

Oregon appears on a collision course with federal regulators whose environmental review of what would be the West Coast’s first liquefied natural gas export terminal is replete with factual errors, missing data, and a lax reading of environmental law, according to state agencies.

The Federal Energy Regulatory Commission on Thursday will announce whether it will grant permission to Pembina Pipeline Corp. to build its $10 billion Jordan Cove Energy Project, including an LNG plant perched on the north spit of Coos Bay, Ore.

If FERC grants Jordan Cove a certificate to go ahead, it will trigger lawsuits in state and federal courts that could take years to resolve.

The Canadian company wants to connect the LNG plant, which would be capable of liquefying 7.5 million metric tons of gas per year, with the North American gas grid by building a 229-mile-long pipeline.

It would cross some 300 bodies of water—many containing endangered salmon—and more than 2,000 acres of forest including about 750 old-growth acres, habitat for endangered species like the marbled murrelet, a small seabird, and the northern spotted owl, according to the FERC environmental impact statement.

The EIS concludes the project would “likely adversely affect” 15 threatened or endangered species. 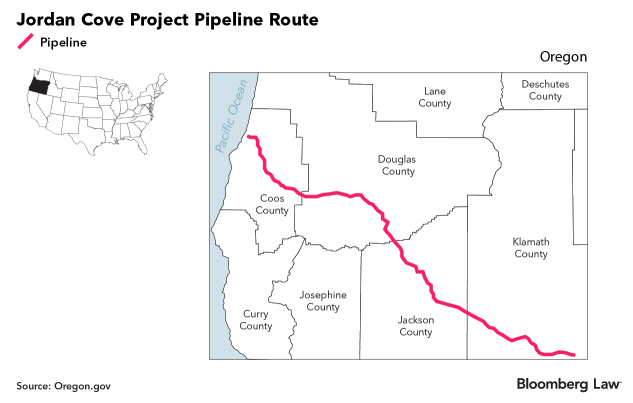 That final environmental impact statement doesn’t address many Oregon state agencies’ comments made on FERC’s draft EIS. The state asserts a litany of problems with the final EIS, including that it accepts inadequately mitigated impacts on endangered species such as the murrelet and the owl; contains no analysis of climate change impacts on local, coastal communities; and makes an error in saying applicants like Jordan Cove are “encouraged” to get certain state permits that Oregon actually requires.

While the EIS discusses the greenhouse gases that will be locally emitted by the LNG terminal, global climate change doesn’t get the attention regulators in Oregon would like. The state is trying to reduce greenhouse gas emissions, and its lawmakers are considering a cap-and-trade climate bill.

But Oregon has very limited authority to address greenhouse gas emissions from the combustion of natural gas in Japan or its production in fracked wells in the U.S. or Canada. And FERC says such lifecycle greenhouse gas analyses are beyond the scope of the EIS and aren’t required.

FERC has determined that greenhouse gases emitted into the atmosphere during either production of the natural gas or its combustion does not constitute an indirect effect of LNG projects, Jacqueline Holmes, FERC’s associate general counsel for energy projects, said in an interview. Greenhouse gas impacts are only evaluated in regard to those directly attributable to the project itself and any cumulative impacts with other foreseeable projects in the immediate vicinity, she said.

The Coos Bay terminal would be the first on the West Coast connected to the gas grid for exporting U.S. and Canadian natural gas.

If FERC gives Jordan Cove a green light, Pembina must obtain about 27 permits and approvals administered by a state with Democratic majorities in the Legislature and a Democratic governor. So far, the permits are not forthcoming.

State agency comments on the federal environmental impact statement said that FERC staff didn’t use adequate due diligence required by the National Environmental Policy Act on a range of issues from cumulative impacts on endangered species habitat to failing to adequately evaluate seismic hazards at the LNG site, which is in an area subject to tsunamis and subduction zone earthquakes, among the largest on the planet.

Jordan Coves rejects such assertions of inadequate analysis as unfounded in its response to comments on the draft EIS.

“Simply because the state issues comments, does not mean they are valid to the regulatory process,” Pembina spokesman Paul Vogel said. “This underscores one of the considerable challenges with Oregon’s state permitting agencies and process. If nothing else, the regulatory process should provide certainty and consistency. We have found that not to be the case here, and that is a persistent source of frustration to the project and its supporters, and even consternation to federal coordinating entities.”

Attorneys are planning next steps.

“If FERC approves these projects this Thursday, Sierra Club will definitely seek rehearing,” Nathan Matthews a staff attorney with the group’s environmental law program, said. “This project is a boondoggle that still doesn’t have evidence of market support, and that represents the type of fossil fuel infrastructure we need to move away from as quickly as possible to avoid catastrophic climate change.”

One of the metrics FERC considers when deciding whether to approve a proposed LNG project is commitments from buyers.

“They are all very interested in seeing Jordan Cove come into fruition,” he said. “Being able to access really low-cost sources of gas supply both from the U.S. Rockies and Western Canada provides a unique diversification opportunity for them. Key drivers for them though are purely lower shipping costs coming from the West Coast; the ability to not have to navigate through the Panama Canal from the U.S. Gulf Coast; their ability to avoid additional costs on transit fees through the canal and potential delays coming through the canal make Jordan Cove an attractive option for them.”

Decisions on several permits for Pembina are due in the coming weeks.

The federal Coastal Zone Management Act gives Oregon the power to require Jordan Cove to show compliance with certain state policies and permits, some of which could otherwise be preempted by FERC.

Gov. Kate Brown’s spokeswoman, Kate Kondayen, said, “Gov. Brown has been consistent in communicating her expectation that state agencies follow all laws and regulations when considering how any proposed project affects Oregon’s clean air and water. The Governor would have serious concerns if the federal government were to assert pre-emptions of state permitting processes, and would consider all available options to safeguard the health and environment of Oregon.”

If Oregon denies Jordan Cove the required determination under the CZMA, the company could appeal to Secretary of Commerce Wilbur Ross.

Ross last month hailed a decision by National Oceanic and Atmospheric Administration scientists who found in a biological opinion that the project wouldn’t jeopardize some 17 endangered species or damage their critical habitat. That decision, Ross said in a press release, “will pave the way for more American jobs and vastly expanded exports of domestically sourced liquified natural gas to prized Asian markets.”

Another legal challenge facing the LNG project could come from landowners.

“FERC would be allowing a pipeline company to take property in order to ship Canadian gas to Japan,” Bookbinder said. “It is impossible to see how this pipeline is a public use or public benefit either under the Natural Gas Act or under the takings clause of the Fifth Amendment.”

Jordan Cove has secured voluntary agreements from about 75% of the 252 privately owned parcels along the right of way, Vogel said.

To contact the reporter on this story: in Seattle at pshukovsky@bloomberglaw.com