More states are stepping up to protect people from drinking water contaminated with “forever chemicals” in the absence of federal enforcement.

Twenty-three states are writing their own guidance, regulations, or legislation that would address drinking water contaminated with per- and polyfluoroalkyl substances, also known as PFAS.

The family of thousands of chemicals, once used in Teflon and Scotchgard, may cause liver tissue damage, immune system or thyroid problems and increased cholesterol levels, according to the Environmental Protection Agency. The substances require massive amounts of energy to fully break down, enabling them to persist in the environment, seemingly “forever.”

Since early 2019, the EPA has been considering whether to set drinking water limits for PFAS, as part of an action plan that also includes new drinking water detection methods. The chemicals can enter the environment through the use of firefighting foam, companies’ waste products, and consumer goods.

“Aggressively addressing PFAS will continue to be an EPA priority in 2020,” an EPA spokesperson said in an email.

In the meantime, states that have opted to act are deciding how much PFAS is safe to drink, and what should be done about contaminated water sources. Most states have focused on two of the better-understood chemicals in the PFAS family—PFOA and PFOS—while others are assessing the safety of five or more.

Michigan is one of the most active states in the country on the issue. It completed the first statewide test of drinking water sources and embarked on cleanup at 76 contaminated sites. The state is working on creating enforceable limits for seven PFAS in drinking water, and is now taking public input on a draft rule.

The state has also gone after 3M Co., Dupont, and other companies for millions of dollars for cleanup and damages for contaminating state drinking water. 3M and DuPont were the original companies developing and producing PFAS, dating to the 1940s. Michigan’s citizens have been at a heightened sensitivity to water contamination following the Flint water crisis.

Some states that haven’t set their own standards, such as Arizona and Florida, are following the EPA’s health advisory level for PFOA and PFOS. The EPA advised people not to drink water that has a concentration of combined PFOA and PFOS above 70 parts per trillion, but hasn’t made those limits mandatory.

Arizona, Indiana, Missouri, North Carolina, and Oklahoma also have laws that prevent them from setting a drinking water guideline that is more stringent than federal standards, according to the Environmental Council of States. Many states lack the resources to effectively regulate individual PFAS, the council found. 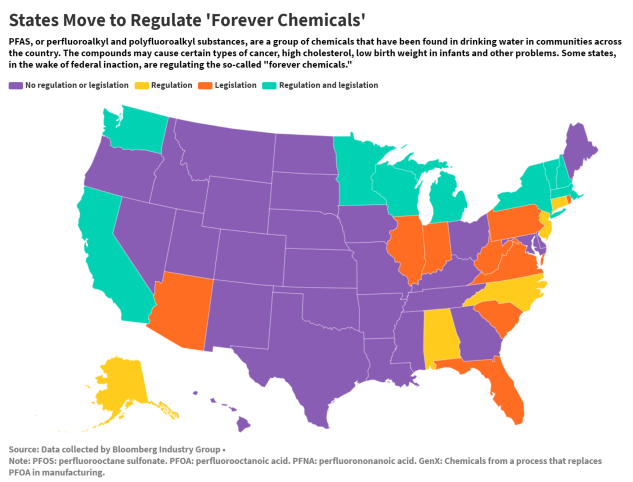 (For an interactive version of the map, click here)

But several states have opted to set stricter, and enforceable, limits.

“In the absence of federal leadership, and to protect our communities, New York state is in the final stages of adopting among the most stringent water safety standards in the nation for the emerging contaminants PFOS and PFOA,” said New York State Department of Health spokeswoman Erin Silk.

New York planned to set a cap of 10 parts per trillion for PFOA and PFOS, according to a proposal from December 2018, but progress has been slow due to multiple rule revisions. The state plans to release the amended proposal in April, according to Silk.

Environmental and health advocates, along with state residents from sites contaminated by PFOA and PFOS, have urged the department to hurry up.

Nearly 16 million New Yorkers are served by water systems that have unregulated contaminants—including PFOA, PFOS, and 1,4-dioxane—and 6.4 million residents are served water that hasn’t been tested for chemical compounds, including PFOA and PFOS, according to a May 2019 report from the New York Public Interest Research Group.

“What is taking so long to establish safe drinking water levels for PFOA and PFOS?” asked Michele Baker, a resident of Hoosick Falls, a community in upstate New York where municipal water sampling in 2015 showed concentrations of PFOA at more than 600 parts per trillion.

“It’s outrageous. You want to shake your fists in the air, and you want to curl up in a ball and cry at the same time,” she said.

Several more companies are involved in major PFAS contamination lawsuits, including 3M Co. and DuPont. Some of the chemicals have also been used by hundreds of companies such as Wolverine World Wide, Inc. and W. L. Gore & Associates, Inc. to make thousands of products including semiconductors, sticky notes, and shoes.

Saint-Gobain and Honeywell said they have made it a “top priority” to provide potable water to Hoosick Falls residents.

“We have fully cooperated with the authorities in investigating the sources of PFOA,” according to an online statement from both the companies. The companies provided bottled water until a filtration system was installed in the village’s municipal water supply.

Baker wasn’t on the municipal water system, but her well, about 2.6 miles from ground zero at Saint-Gobain, still tested at 70 parts per trillion for PFOA. She has since had to install a filtration system.

In California, an estimated 3.5 million residents are served by water systems where samples exceed the EPA’s advisory level for PFOS and PFOA, according to a nationwide survey of water systems required by the EPA. The state has been investigating the sources of contamination.

Earlier this month, the State Water Resources Control Board said it planned to slash the detection level at which water suppliers must take action to avoid exposure. The move immediately prompted water agencies in Orange County south of Los Angeles, which serve 2.5 million people, to begin removing a fifth of their wells from service.

The state is slowly working toward a drinking water standard by late 2023 for those two chemicals. Water samples taken near landfills, airports, and other locations have detected at least seven other forms of PFAS. Metal plating facilities and nearly five dozen Department of Defense sites are also being sampled as part of a multi-year plan to find the source of the contamination.

Aqueous film-forming foam is a type of firefighting foam that contains PFOS and is effective at putting out jet fuel fires. The military’s use of the foam in training exercises and emergencies may contribute to the spread of PFAS in the environment.

Like other states, California has set notification levels in the absence of EPA action, though even those aren’t as low as health officials wanted.