The election could have far-reaching consequences for the U.S. Labor Department's enforcement strategy.
Photographers: Angela Weiss and Saul Loeb/AFP via Getty Images

Ben Penn: The direction of the U.S. Labor Department’s enforcement agenda is on the ballot Tuesday—and that was true even before the pandemic altered public perceptions of workplace safety.

A second term for would give an opportunity to solidify his push to provide employers with a more predictable enforcement environment nationwide.

If former Vice President wins, his campaign has signaled he could restore elements of the Obama administration’s worker-focused approach—for example, aggressively targeting companies on wages, safety, and use of independent contractors.

Scalia has made strides in changing DOL’s enforcement strategy during his year in office, and some management lawyers report getting a more receptive audience when escalating complaints to Washington. But the pandemic has exposed Scalia to criticism that he has failed to use the department’s vast enforcement levers to proactively protect workers from Covid-19.

For many voters, safety on the job—if they’re lucky enough to have one—could play a role in their decision. For others, steps the Trump administration has taken to boost employers could be crucial.

A Biden-run DOL would be likely to restore a tighter alliance with unions, worker rights’ organizations, and the plaintiffs’ bar. Those elements have called for DOL’s Wage and Hour Division to increase outreach to workers about temporary paid family and sick leave benefits related to the virus.

Even if Congress doesn’t extend emergency paid leave into 2021, a Biden-run WHD would likely take greater initiative to inform workers about their rights and encourage them to file complaints.

“We’ve been asking Wage-and-Hour to stand up a hotline for workers who want to access rights to paid sick days for six months,” said Tanya Goldman, a senior policy analyst at the Center for Law and Social Policy and a former WHD official in the Obama administration. No dice, she said. Yet the Office of Federal Contract Compliance Programs, she said, created a hotline “in a matter of weeks” for workers to lodge complaints about racial-sensitivity training.

“It’s just a really vivid illustration of this DOL’s priorities,” she said.

Trump’s diversity-training order is the one enforcement area that would concern the business lobby if he’s reelected. It has drawn pushback from businesses and civil rights groups, unusual allies when it comes to enforcement issues.

This puts Sherk in an awkward conflict with employers who’d grown to view him as an ardent advocate for business. Interestingly, years before Sherk began leveraging OFCCP to carry out Trump’s order, the Heritage Foundation alum called for the agency to be eliminated.

Bruce Rolfsen: DOL’s Bureau of Labor Statistics is set to release its workplace injury and illness survey numbers for 2019 at 10 a.m. Wednesday.

The injury and illness rates, along with data on workplace fatalities (expected Dec. 16), provide a report card of sorts on the effectiveness of government, union, and industry safety efforts.

Attention will be paid to whether the rate for private industry changed after being stable in 2017 and 2018, at 2.8 cases per every 100 full-time worker equivalents. The rate has steadily declined since BLS began tracking it. It was 5.0 in 2003 and 3.3 a decade later. 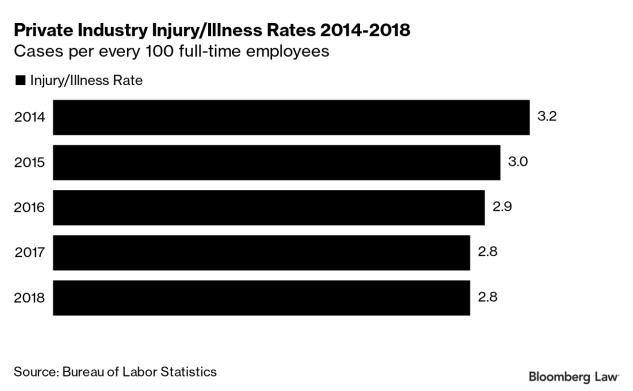 The BLS data will feature rates and the number of cases broken down into numerous categories, including race, age, sex, occupation, industry, and the immediate cause of the injury.

Critics of the survey fault it for depending on reports submitted by employers. Some may not understand which cases must be reported, they say, while others may be deliberately undercounting. The agency has studied use of alternative sources, such as workers’ compensation records or anonymous surveys of workers, but it hasn’t changed its approach.

BLS calculates the numbers based on data that some 240,000 employers it selected filed in early 2020. The reports are confidential and, by law, the agency can’t release information about individual employers. Researchers who agree to abide by BLS privacy restrictions have access to more detailed information than what ultimately is released to the public.

Starting this year, there’s an additional source. The Occupational Safety and Health Administration, under orders from two federal courts, released databases with information first submitted in 2016 by about 230,000 employers. The reports publicly identify the employers.

Ian Kullgren: I’m writing to you from Michigan, where unions hope outreach efforts geared toward former members will play a crucial role in Midwestern swing states.

For months, a strategist hired by the nation’s largest labor groups has been contacting former members in an effort to lock down support for Biden. Many of these workers were laid off when manufacturing plants closed.

The effort is led by Steve Rosenthal, a former political director for the AFL-CIO. His firm’s work is funded by SEIU; Communications Workers of America; AFSCME; National Education Association; American Federation of Teachers; Teamsters; and the AFL-CIO, to name a few.

A super PAC called Union 2020 coordinated the spending; it is designed to supplement unions’ existing outreach to current and retired members.

The goal is to avoid a repeat of 2016, when Trump got more votes from union members than any Republican since Ronald Reagan. Hillary Clinton still won a majority of union voters overall, but her numbers were down 10% from former President Barack Obama’s in 2012. Meanwhile, Trump won the majority of white male union members 53%-41%, according to post-election data analyzed by Nate Silver. 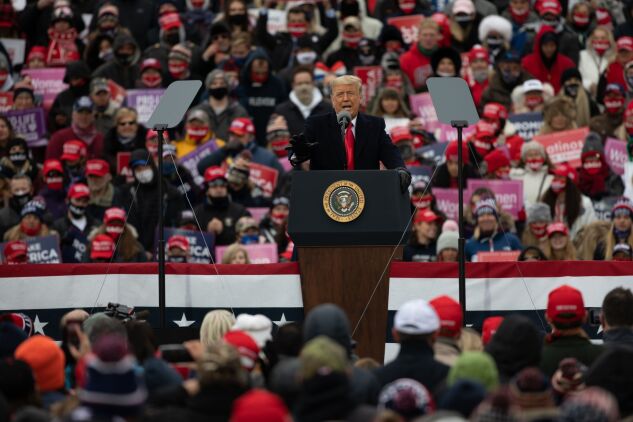 Rosenthal’s team compared union membership rolls from the last decade to current rolls to identify workers who fell out of the ranks.

“We’ve got people who lost collective bargaining in Wisconsin or changed jobs, a plant closed and they’re no longer there,” Rosenthal said.

The coronavirus upended the playbook for Union 2020 to canvass former union members in person, however, raising questions about its chances of success. The group has instead relied on direct mail, digital ads, and email.

Since then, undecided voters appeared to break hard for Biden. An updated internal poll last month showed Biden with a 72% to 21% lead over Trump among the same group of all-white voters. The numbers were even stronger in Michigan, with Biden up 88% to 9%.

“We’ve done mostly positive information about Biden that included, as an example in Michigan, a piece that talks about the fact that he has a ’67 Corvette,” Rosenthal said. “We were on the Corvette before the campaign was.”