Labor Secretary Eugene Scalia has worked to put his stamp on Labor Department enforcement actions since taking over in Sept. 2019.
Photographer: Leah Millis/Reuters/Bloomberg via Getty Images

In 2018, sent its high-powered attorney, , then a partner at corporate law firm Gibson, Dunn & Crutcher, on a mission to San Francisco to make a U.S. Labor Department investigation go away.

Scalia, a savvy management lawyer who served a one-year stint as the department’s chief legal officer during the George W. Bush administration, was attempting to get DOL West Coast officials to accept a settlement more to the banking giant’s liking. The department was charging Wells Fargo with failing to pay more than 1,000 call-center workers for hours worked off the clock.

When the DOL officials refused his terms, Scalia asked if they’d checked with the department’s national office, two sources familiar with the negotiation said. Scalia wanted to ensure their position was consistent with the views of Trump-appointed DOL leaders in Washington.

He didn’t get his way.

Two years later, Scalia’s primary objective as U.S. Labor Secretary has been to solidify an enforcement philosophy at DOL that’s predictable for employers. Businesses had railed against the Obama administration for what they viewed as its overly punitive, “gotcha"-style tactics. Their frustration mounted when ‘s first labor secretary, was slow to rebalance the enforcement landscape.

Scalia, who took office Sept. 30, 2019, has worked to centralize decision-making; shift power away from career investigators and attorneys; emphasize providing employers with fair notice of pending actions; and ensure consistency across DOL’s vast bureaucracy of enforcement offices, according to interviews with two dozen current and former DOL officials and outside lawyers.

“Gene understands that there’s a statutory law and there’s a regulatory law, but the real action of these agencies is enforcement,” Randy Johnson, a longtime business lobbyist, said in early March, before Scalia appointed him to DOL’s legal-review board. “He’s taken tighter control over what’s going on at the enforcement level, compared to his predecessors.”

Completing that complex undertaking hinges on whether Trump is reelected.

Under Scalia’s watch DOL has begun soliciting complaints from companies under investigation. The head of DOL’s Wage and Hour Division, one of its foremost enforcement arms, has invited corporate lawyers to complain to the national office about “tenacious” investigators.

“Over the last year there’s been a welcome renewal of opportunities for stakeholders to have determinations that are made in the field by agency personnel reviewed by individuals who are higher up in the agency to ensure consistency of policy application,” said Paul DeCamp, a senior DOL official in the George W. Bush administration who now represents companies in wage-hour disputes.

The division also revoked an Obama-era practice of routinely seeking “liquidated damages” in back-wage cases, meaning double the amount a company should’ve paid a worker in the first place.

Scalia’s leaders also are working to rein in career attorneys and investigators who are deemed overly aggressive, 10 sources said. That has included the forced transfer of DOL’s top West Coast litigator, whose region was responsible for the Wells Fargo investigation.

That litigator, Obama-era career appointee Janet Herold, has alleged she’s being retaliated against in part because of a disagreement over how aggressively DOL should police companies that use independent contractors to avoid having to pay minimum wages and overtime to workers who should be considered employees.

The secretary gave himself authority to overturn decisions issued by the department’s Administrative Review Board.

And Scalia has empowered top officials, including Solicitor to scrutinize the work of DOL enforcers across the U.S. Career attorneys now sometimes get their legal work line-edited and, in some cases, watered-down by the political leadership in Washington, seven sources said.

“From a taxpayer’s standpoint, I think that’s welcome,” said David Fortney, a former DOL acting solicitor under George H.W. Bush who now represents companies facing DOL investigations. “You don’t want this mantra of only career people deciding what to do.”

Yet organized labor, Democrats, and workers’ rights attorneys view Scalia’s quest as a naked, corporate-friendly agenda that undermines the agency’s mission to safeguard employees. The pandemic has heightened this criticism.

Opponents say Scalia has failed to leverage the department’s enforcement functions to defend workers at a time when their lives and finances are in peril. They have faulted Scalia’s department for writing rules to narrow the effect of an emergency paid-leave law.

The AFL-CIO and other unions have sued over Scalia’s reliance on voluntary guidance rather than issuing an enforceable emergency standard that would require companies to protect workers from Covid-19 infection on the job.

DOL’s Occupational Safety and Health Administration has spent the past month promoting citations levied against companies for coronavirus-related violations. But those fines have averaged $14,000 per employer, prompting greater outcry that weak enforcement is endangering worker safety.

“No one wants unfair enforcement. But this is the wrong focus at this particular moment,” said Terri Gerstein, director of the State and Local Enforcement Project at Harvard University’s Labor and Worklife Program. “In the midst of these multiple crises, the sole, burning focus of the Labor Department should be on protecting workers from danger and destitution.” 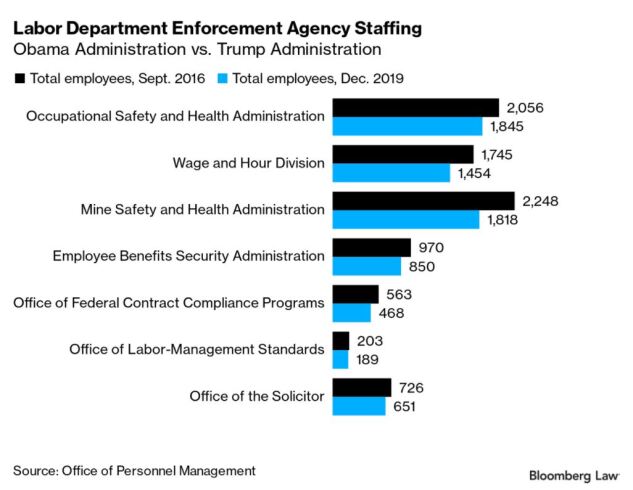 He said OSHA also must recognize that the “great majority of employers are very focused on keeping their workers and customers safe.”

Bloomberg Law requested, but didn’t receive, an interview with Scalia for this article.

From the Trump administration’s perspective, Scalia is restoring the department’s relationship with employers.

Industry lobbying groups denounced the Obama DOL’s use of maximum penalties for wage and safety violations, its pursuit of discrimination lawsuits based on payroll audits, and investigations of joint-employment issues and contractor classification that targeted corporate business models.

Those efforts, in the business lobby’s view, pressed the bounds of DOL’s legal authority, castigated well-intentioned businesses, and weren’t counterbalanced with sufficient compliance assistance for employers.

“When I was first here there were complaints, which is one of the reasons to wonder about how the enforcement agencies were doing things,” DOL Deputy Secretary Patrick Pizzella said during an Oct. 22 interview arranged by the department. “The main thing we pushed the enforcement agencies [on] was to enforce the law and to enforce it consistently across the country. I can’t say we’ve solved the issue, but I think we’ve gotten to be a lot more consistent.”

Pizzella, a crafty GOP operative, joined the department in April 2018. When Scalia took over he unleashed Pizzella to lead a review of enforcement functions, giving him a more prominent role after Acosta iced him out of substantive policy discussions.

Pizzella was tasked with setting up recurring sessions for Scalia to meet with the six enforcement subagency chiefs, share best practices, and home in on data-targeting to make better use of resources.

Some policies that stemmed from these meetings have been less controversial, such as Scalia’s description last month of focusing enforcement in workplaces where “there’s likely to be a prosecutable violation.” 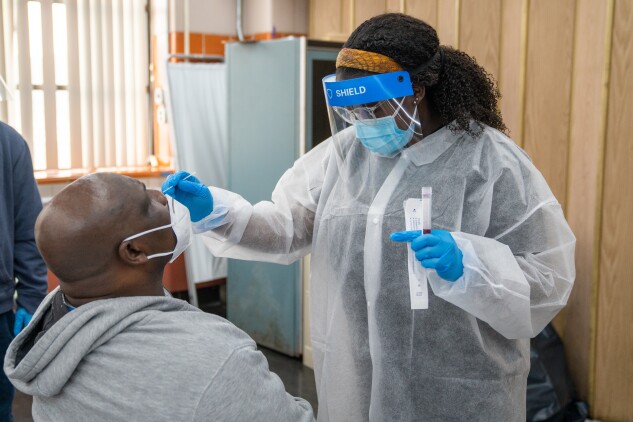 While pandemic response has consumed DOL, requiring the department to oversee a historic ramp-up of unemployment assistance and to distribute numerous other forms of aid provided by Congress, political leaders have continued to implement Scalia’s targeted-enforcement plan. That effort also helps explain why the secretary has resisted calls to deploy a more muscular approach to workplace-safety enforcement during the pandemic.

Preliminary numbers for the recently concluded fiscal year show OSHA inspections dropped sharply once the pandemic hit. Worker advocates say the opposite should have taken place.

“They’re not enforcing the law, and this is basically a deliberate strategy,” said David Madland, a senior fellow focused on workplace policy at the left-leaning Center for American Progress.

In an April memo obtained by Bloomberg Law, Pizzella instructed enforcement subagency leaders on steps to improve their ability to use data to target investigative resources.

The “Department Enforcement Data Plan” would allow DOL to “uncover wrongdoing committed against America’s workers while improving our relationships with job creators that operate in good faith and follow the law,” Pizzella wrote.

Critics charge that DOL leaders have inappropriately dedicated themselves to the second part of that equation. They point to a more recent Pizzella directive, to halt media releases promoting enforcement actions until after cases are resolved. Pizzella’s memo to staff cited concern that such releases “can create an online record that is prominent in search results regarding a particular company.”

The use of press releases to deter workplace violators is “an incredible tool that Scalia is basically saying we’re going to take off the table,” said David Weil, head of the Wage and Hour Division under Obama.

In rebutting the criticism, Pizzella emphasized positive enforcement results during fiscal 2020, which ended Sept. 30. He cited the second-highest total to date in anti-discrimination settlements with federal contractors and a record amount in employee-benefit plan recoveries.

But the pandemic contributed to less robust enforcement at other subagencies during the same period. The Wage and Hour Division’s back-pay collections topped $250 million, Scalia told staff in an internal email obtained by Bloomberg Law. That figure peaked at $322 million in the prior fiscal year.

‘One Administration at a Time’

Another likely factor is that enforcement agency staffing was down across the board as of December 2019, according to the most recent data available from the Office of Personnel Management. OSHA had 1,845 employees as of December compared with 2,056 in September 2016. The WHD had 1,454 staffers compared with 1,745 at the same points.

The Solicitor’s Office, which plays a central role in prosecuting agency enforcement actions, lost 75 employees over that span.

A Labor Department spokesperson, in a subsequent statement, said DOL leadership “has delivered excellent results on enforcement and compliance assistance.”

“Consistency and predictability are important goals for the Department’s enforcement of national laws,” the statement added.

As Scalia looks to cement his enforcement program, Pizzella ordered a review and modernization of all enforcement agency field manuals.

The ongoing project is designed to prevent investigators from interpreting the law under a prior administration’s policies when current leadership is implementing a different approach—the very issue at the heart of the whistleblower complaint that Herold, the Western Region solicitor, filed against Scalia.

“There’s one administration at a time,” Pizzella said when questioned about seizing control of operations to prevent overly aggressive civil servants. “I don’t think the previous administration was advancing our policies, and we’re not advancing theirs.”