Some United Parcel Service drivers and other workers are pushing back against a labor contract.
Photographer: Victor J. Blue/Bloomberg via Getty Images

drivers may face a bumpy ride to a new nationwide contract as a splinter group of Teamsters mounts a campaign to reject a tentative deal.

The proposal offers a five-year pact that includes a $4.15-per-hour raise over term and increases pension benefits, a draft document published by the union shows. The deal would cover about 250,000 drivers, package handlers, and others. The union says this is the largest labor agreement in the U.S.

The tentative pact creates a new class of drivers who would work weekends and get a lower starting salary. That proposal is central to the opposition group’s concerns.

If the opposition movement succeeds, it will force leadership back to the bargaining table. Reopening talks could signal to rank-and-file members that their leaders weren’t aggressive enough in negotiations. That could play poorly with members at the next union election, a labor professor said.

The new driver class will “cause problems down the road” because it pays new employees less than current employees for the same type of work, Local 25 President Sean O’Brien said. In theory, United Parcel Service could push the majority of its workload to the new lower-paid workers and decrease the work hours of higher-wage workers, he said.

“What we’re theoretically doing is burying the unborn,” O’Brien told Bloomberg Law. “Unfortunately the unborn grow up, and it’s tough when you’re doing the same job next to the same person and you’re making six, seven dollars less per hour.”

O’Brien, whose local is based in Boston, is running to unseat Hoffa. O’Brien served as the Teamsters’ lead negotiator for about six months before Hoffa demoted him from the leadership role in September 2017, a month before negotiations with UPS officially began. O’Brien remained part of the negotiating committee.

Hoffa declined to comment, but a Teamsters spokesperson criticized what she called efforts to put “internal union politics” before the interests of members.

“It is disappointing that some Teamsters and non-Teamsters are putting their own political aspirations over the needs of the members,” spokesperson Kara Deniz said in a statement to Bloomberg Law. 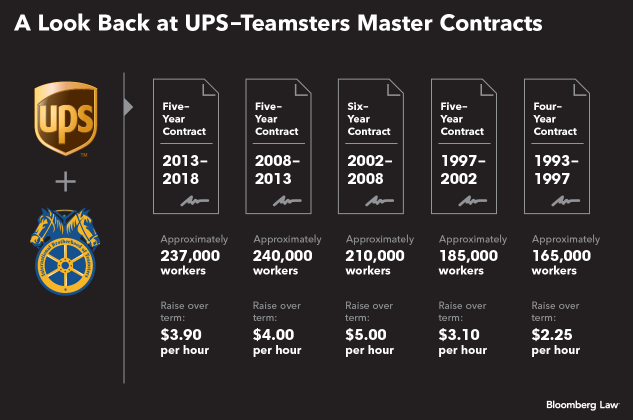 Deniz declined to comment on terms of the proposed pact because of the upcoming ratification vote. Local Teamsters leaders approved the proposal Aug. 9 and cleared it for final member approval. Ballot packages are expected to be sent out in early September, and results are anticipated by the end of that month.

UPS believes the contract meets the needs of employees and the company, spokesman Steve Gaut told Bloomberg Law. It will “reward employees for their contribution to UPS’s success through wage increases, benefit improvements and the creation of thousands of new full-time jobs.”

Union leadership has done a poor job of communicating developments to employees during the negotiations, according to Teamsters for a Democratic Union national organizer Ken Paff. Leaders also deleted comments critical of the contract from a union Facebook page, Paff alleges.

Opposition to the contract is growing, and the deal will be rejected, Paff told Bloomberg Law. The only question is the margin of employees opposed to the master agreement, he said. If the contract fails by only a few percentage points, the union will be able to make some small adjustments and attempt another vote. If the margin is big enough, it will force negotiators to reconvene, Paff said.

Leaders at locals in Kentucky and Rhode Island have already publicly urged members to reject the master contract.

UPS employees covered by the agreement continue to work under terms of a contract that was extended beyond its July 31 expiration date.

Contract negotiations often serve as a referendum on union leadership, Robert Bruno, the director of the Labor Education Program at the University of Illinois at Urbana-Champaign, said. That means any opposition to a UPS contract translates to a rejection of leadership.

“The contract is the most important artifact of how well the leadership is doing,” Bruno said.

The agreement’s effect on union politics is coming into focus as campaigning for leadership posts begins three years before the election.

In May, O’Brien announced his plan to challenge Hoffa. Local 89 President Fred Zuckerman will join O’Brien’s ticket as a candidate for general secretary-treasurer. Zuckerman came within a few thousand votes of beating Hoffa in 2016.