A United Auto Workers member wears a sticker outside of UAW Local 5960 in Lake Orion, Mich., on October 25, 2019. Union membership was down by about 100,000 people in 2019, according to the Bureau of Labor Statistics.
Photographer: JEFF KOWALSKY/AFP via Getty Images

The percent of U.S. workers belonging to unions fell two-tenths of a percent to 10.3% last year, fueled by an expanding workforce and declining union membership base, according to data released by the Bureau of Labor Statistics. That’s the lowest the union membership rate has been since BLS began tracking the statistic in 1983.

The data continue a trend of relatively steady union membership numbers and slowly declining union membership rates. The decrease could be a wake-up call for unions to focus even more on organizing new members, especially with approval of labor unions near a 50-year high.

Union membership overall declined by about 100,000 people in 2019 with losses in both the public and private sector. About 7.1 million workers in the public sector belonged to unions last year. Around 7.5 million private sector workers were union members.

“The numbers reflect both the tremendously difficult barriers workers seeking to form a union continue to face and the unmatched resilience of working people in our desire to win bargaining power on the job,” the AFL-CIO, the country’s largest federation of labor unions, said in a statement. 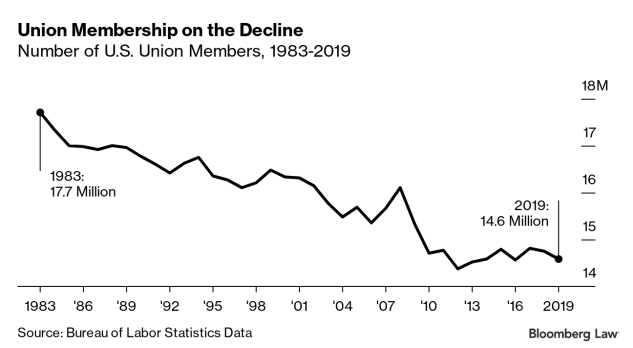 One out of every three public-sector workers belonged to a union last year, according to the BLS. That’s more than five times the union membership rate of private-sector workers where 6.2% of the workforce claimed union affiliation.

Although the percentage of public sector union members fell three-tenths of a percent to 33.6% last year, there continued to be no signs of a significant membership exodus following a 2018 U.S. Supreme Court decision that limited revenue streams for government unions.

Protective service workers had the highest union density of any occupation at 33.8%. Educators, trainers, and librarians were close behind at 33.1%. 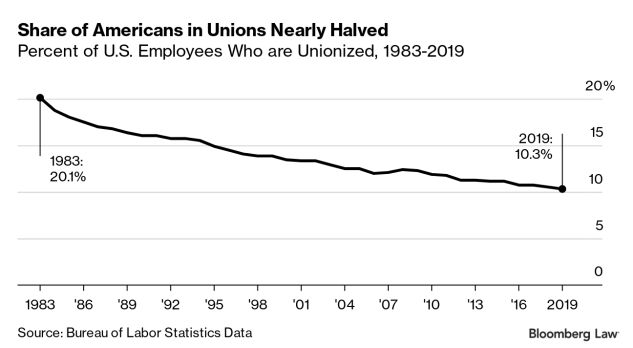 Not All Bad for Unions

“The modest gains made last year helped the total number of professionals in unions reach the highest level to date, clearly demonstrating continued opportunities to grow the labor movement by organizing professional and technical employees,” the AFL-CIO’s Department of Professional Employees President Jennifer Dorning said in a statement.

A number of unions, including the Communications Workers of America, are investing in new efforts to organize white collar workers. (Bloomberg Law’s newsroom is represented by the NewsGuild, a sector of the CWA.)

The CWA announced earlier this month that it was launching a new initiative to unionize tech and video game workers—an industry largely untouched by organized labor.

(Updated with additional reporting and addition of charts.)