Federal governments have been quick to exempt food makers and distributors from lockdowns related to the coronavirus outbreak -- after all, people have to eat. Now some local authorities and unions are fighting back.

Mayors in South America have halted some aspects of agricultural production. Unions have threatened to strike over safety concerns. And some poultry workers in the U.S. walked off the job.

These pockets of resistance along the supply chain underscore the balancing act needed to contain the coronavirus and protect workers deemed essential while delivering goods and services. It’s an especially acute issue given that transportation, labor and other logistical woes have already made it hard to get food where it needs to be in the pandemic era. 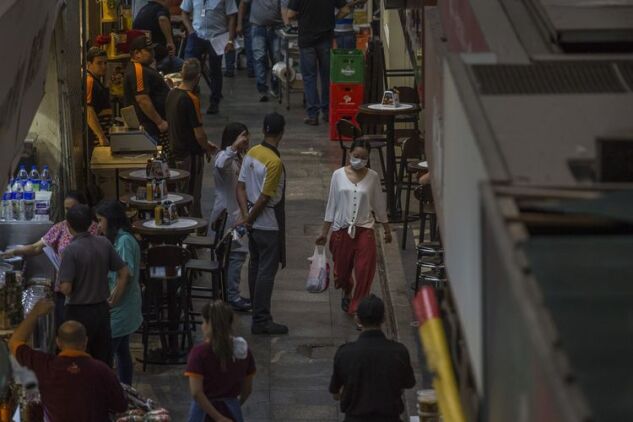 A shopper wearing a protective mask walks through the Municipal Market in Sao Paulo on March 19.
Photographer: Rodrigo Capote/Bloomberg

In Brazil, a union nearly succeeded in shutting down two JBS SA chicken facilities by convincing a judge that the health risks were too great. In the U.S., chicken giant Perdue Farms is trying to appease workers after two dozen employees at a 600-person plant in Kathleen, Georgia, staged a walkout. The first meat processing employee to test positive for coronavirus in the U.S. also materialized Monday, at a Sanderson Farms Inc. plant.

“These brave workers walked out to protect themselves, their community and the public,” said Debbie Berkowitz, worker health and safety program director at the National Employment Law Project, who added that meat plant workers should get raises for the risks they’re taking.

While none of the meat plant incidents have so far caused operational disruptions, there are concerns that more may be coming, causing supply chain hiccups right as consumers are binge-buying groceries to fuel shelter-in-place lockdowns.

The U.S. pork industry has requested more guest worker visas, and there’s speculation that plants have been running full-tilt not only to supply unprecedented retail food demand, but also to get as much production in as possible before virus-related disruptions slow the pace.

It’s not only meat. Some mayors in key Brazilian agricultural areas are halting transportation as a way to contain the virus. The mayor of Canarana in Mato Grosso state halted trucking to grain ports, and the mayor of Rondonopolis has ordered mills to stop operating. Repair shops are also facing restrictions.

In neighboring Argentina last week, trucks were blocked from a key section of the Parana River grain hub by a local mayor. Unions in both South American countries are also seeking assurances that exempt industries and workers are safe.

While a presidential decree states that people involved in agricultural supply chains have free mobility, some mayors are contravening that, said Manuel Rueda, general manager of Integra Trading SAS.

Yet international food systems depend on labor at the local level.

“We are requesting states and the federal government to intervene in mayors’ decisions,” said Edeon Vaz Ferreira, head of the logistics branch at farmer group Aprosoja in Mato Grosso. “These actions haven’t resulted in real problems yet, but we are acting in advance.”

To contact the reporters on this story:
in São Paulo at tfreitas4@bloomberg.net;
in Chicago at lmulvany2@bloomberg.net