Ben Penn: Boston Mayor Marty Walsh, President-elect ‘s pick for labor secretary, begins the task this week of wooing senators to ease his path to confirmation, and working with the transition team to build out a leadership squad for the U.S. Labor Department. (He’ll also have to find time to deliver a State of the City address in Boston on Tuesday.)

Early signs point to Walsh facing a fairly smooth path to Senate approval, given Democrats’ newfound majority in the chamber and the two-term Democratic mayor’s backing from the building trades, a branch of organized labor that’s not afraid to rub elbows with Republicans.

Perhaps the thornier challenge for the former construction union leader will be to solidify his standing within the incoming administration while navigating the labor movement’s competing interests.

To start, he’ll need to make overtures to progressives who wanted a woman of color, such as California labor chief Julie Su, or someone with greater liberal bona fides, particularly Sen. (I-Vt.), to get the nod for labor secretary. That dynamic is poised to influence the selection process for top DOL jobs under Walsh.

At the same time, the building trades that birthed Walsh into political prominence, a subset of organized labor that’s predominantly male and White, will be counting on him to deliver policy wins for the rank-and-file. But that could include focal points on construction wage surveys, trade, and immigration that at times conflict with the service sector unions’ priorities for their ethnically diverse membership.

Walsh likely is sensitive to this balancing act. He has a reputation as a pragmatist who listens to all parties and works to build consensus among competing groups. He’ll need to rely on those skills, if confirmed.

But that isn’t to say Walsh lacks the power to win over doubters on the subject of diversity.

As head of the Boston Building and Construction Trades Council, he curated a pre-apprenticeship program called Building Pathways. It was designed to create job-training opportunities for women, people of color, and other at-risk populations that are under-represented at construction sites. He’s proud and passionate about this program to this day, his friends say.

As Boston’s mayor, he signed an ordinance requiring the workforce on most major city building projects to be comprised of 40% workers of color and 12% women. Then again, the city has stumbled at ensuring those representation targets are met, according to a recent report from Boston public radio station WBGH.

Walsh as mayor also has shown a commitment to immigrant rights and climate policy. In November he was appointed chair of a coalition of national mayors determined to uphold the Paris Climate Agreement.

Mayor Walsh also has united with groups of workers outside the building trades that represent large numbers of women and minorities. He has marched on a picket line with grocery workers, encouraged home-care aides to vote for union representation, brokered labor peace to end a nursing strike, and offered grants to restaurant owners who agree to pay workers a full minimum wage on top of tips. 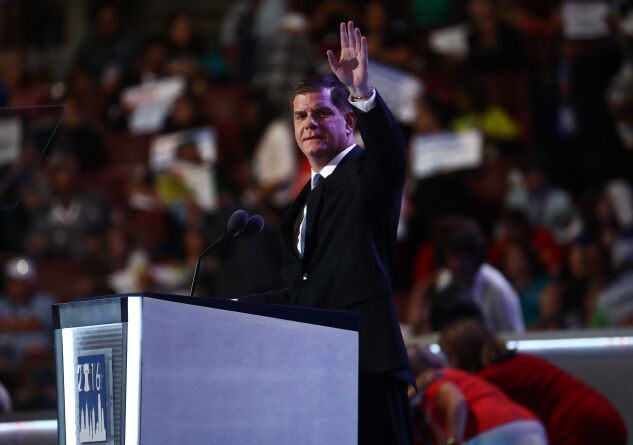 But running DOL will require the big-city mayor to take a national approach to policy. If confirmed, he’ll feel the full weight of the labor movement as the Biden administration attempts to leverage federal power to a greater extent to beat a pandemic that has disproportionately affected workers of color.

Paige Smith: The U.S. Equal Employment Opportunity Commission lined up back-to-back votes for later this week after recently approving final rules to give employers more information during discussions aimed at resolving bias claims, and to limit the amount of “official” time union representatives may devote to working on public employees’ discrimination complaints.

The workplace civil rights agency on Thursday will again revisit the balance of litigation authority granted to its general counsel, a change that could significantly slow the pace of workplace bias lawsuits.

The proposal has drawn criticism, including from Democratic Commissioner Charlotte Burrows. She voted against a March move to pull back some, but not all, of the authority delegated to general counsel Sharon Gustafson.

Routine workplace bias lawsuits could be delayed when authority to make litigation decisions is taken from the general counsel and given back to the leadership panel, Burrows has said.

A proposal to update the EEOC’s religious discrimination guidance also is on the docket for a Friday meeting. It’s caught the attention of a House Democratic chairman, civil rights groups, and even some organizations representing religious minorities.

For example, the Sikh Coalition, a group that defends the civil rights of Sikh Americans, said it was excluded from development of the guidance, and disappointed that the agency erred in describing some religious practices.

“Despite nearly two decades of collaboration between the Sikh Coalition and EEOC, including dialogue about the 2008 manual and participation in community forums to raise public awareness about legal remedies for post-9/11 discrimination, we were not consulted prior to the publication of this Draft Manual,” the group’s legal director, Amrith Kaur Aakre, and senior manager of policy and advocacy, Sim Singh, said in a comment on the proposal.

Other religious organizations, including the United States Conference of Catholic Bishops and National Association of Evangelicals, commended the proposed amendments to agency guidance.

“We are grateful to the Commission for this updated guidance and for the effort it has undertaken to explain Title VII with greater precision and clarity,” the groups said in a comment letter.

Ian Kullgren: The Boston building trades are launching a network of Covid-19 testing centers at construction sites this week that the unions hope will provide a model for other cities.

The unions teamed with a nonprofit, Partners in Health, to set up testing sites near large construction hubs. The first clinic is scheduled to open Monday, with two more to follow later this week.

The effort began with a push from Walsh several months ago, before there was any talk of him being Biden’s labor secretary, Greater Boston Building Trades President Brian Doherty said in an interview.

“We got a challenge from Walsh,” Doherty said. “He said, ‘You have to get this right.’”

The unions aim to conduct contact tracing and communicate outbreaks to workers faster than in the past.

Part of the goal is to prevent the construction industry from shutting down for a second time. Walsh’s decision to halt all construction projects in March for several weeks surprised union leaders, given his deep ties to the building trades, but they ultimately came to see it as wise.

“It was the right decision,” Doherty said. “It let the construction industry pause and come together.”

The testing effort also could lay the foundation for distributing vaccines, though Doherty would say only that the option is “on the table.” That would be a rare approach; most employers, bedeviled by cold-storage requirements and other logistically challenges, have sought to outsource vaccinations to third-party vendors.