About 425,500 U.S. workers participated in 25 major work stoppages in 2019, the highest number of such stoppages in 18 years, according to the Bureau of Labor Statistics.

Despite the rise in stoppages, the total number of workers taking part in major labor actions was down slightly from a 32-year high of 485,000 workers in 2018. Education workers made up a majority of those workers with 270,000 employees involved in 13 major work stoppages last year.

The numbers are yet another data point suggesting that organized labor is becoming more aggressive as approval of labor unions rises and membership numbers hold steady.

About 46,000 United Auto Workers members at went on strike for 29 work days last year. That strike accounted for the most lost workdays of any stoppage in 2019 with more than 1.3 million lost workdays. Other major stoppages included a 20,000-worker strike at and a one-day strike involving 92,700 teachers in North Carolina.

The numbers are evidence of “a fighting spirit” that’s back in the labor movement, according to AFL-CIO Deputy Organizing Director Christian Sweeney. The AFL-CIO is the country’s largest federation of labor unions, which collectively represent more than 12.5 million workers.

“The big part of the story here is that the numbers are quite large, and we think it’s evidence of worker militancy and desire for collective bargaining,” Sweeney said. 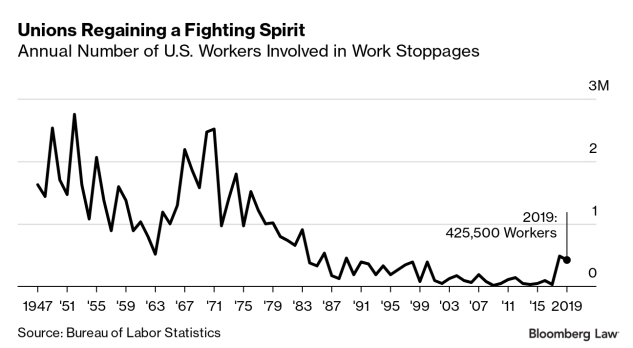 When all work stoppages are considered, not just major ones, there were actually fewer events taking place. BLS data only captures major strikes or lockouts involving 1,000 or more workers and lasting at least one shift.

Bloomberg Law’s work stoppages database shows that 154 strikes and five lockouts began in 2019, down slightly from 2018 when there were 161 strikes and 12 lockouts.

“I’m not ready to say that such a small downturn in total strikes is a reversal of the upswing in worker protests in recent years, due in part to the spate of teacher-led walkouts that started in 2017,” Combs said. “However, changes imposed by the National Labor Relations Board in December could have a chilling effect on union activity in the year to come, which could leave 2018 as the high point for strikes.”

The NLRB issued a flurry of management-friendly decisions at the end of last year. The decisions will allow employers to ban workplace email for union organizing and permit companies to unilaterally cut off automatic union dues deductions when collective bargaining agreements expire.

‘The Strike is Back’

The recent rise in work stoppages is thanks in large part to pent-up worker frustration from stagnation at the bargaining table, according to Rutgers School of Management and Labor Relations Professor Rebecca Kolins Givan.

“Today’s numbers show that the strike is back—that since the West Virginia teacher’s strike of 2018, workers around the country have taken heed of the fact that the strike is the ultimate weapon at their disposal and sometimes they need to wield it if they’re going to win their fight,” Givan said.

As more strikes take place across the country, it offers workers increased leverage by making the possibility of a strike a more credible threat, the professor said.

But Patrick Semmens, a spokesperson for the National Right to Work Legal Defense Foundation, called into question the metrics for what qualifies as a work stoppage. He said that several of the largest work stoppages were simply lobbying days for teachers.

Semmens also said that a rise in strikes could foster worker intimidation.

“From our perspective, the big concern always is strikes most of the time involve threats and intimidation against very rank-and-file workers who decide not to participate or don’t want to participate end up getting bullied into it,” Semmens said. “That’s always something we’re on the lookout for.”

The National Right to Work Legal Defense Foundation pursues litigation against what it describes as “compulsary unionism abuses.” It said in October that it settled charges against the United Food and Commercial Workers stemming from a massive April 2019 strike at grocer Stop & Shop.

(Updated with additional reporting and graphic.)