The federal government awarded roughly $3.6 billion for outside legal services from Oct. 1, 2009 to Sept. 30, 2018, more than $344 million in 2018 alone, according to a new analysis of federal contracting data by Bloomberg Law.

The Justice Department, the Department of Health and Human Services, and the Equal Employment Opportunity Commission were the top customers, having contracted for a total of at least $2.541 billion during the period.

Hunton Andrews Kurth proved to be the law firm with the largest sum of government contract transactions. The firm was formed by the merger of two other firms last year, and the analysis combines contracting data from the predecessor firms and the current firm.

Big Law has stepped in to provide legal support to many parts of the federal government in the last decade, from the obscure, like the Department of Energy’s Office of Civilian Radioactive Waste Management, to the well-known, like the Treasury Department’s Troubled Asset Relief Program.

These firms can be called on when a job is too big to do within the government, or when it requires niche expertise that can’t be found in-house.

Contract totals used in this story were derived from Bloomberg Government’s federal contracting database, which is based on the Federal Procurement Data System. Totals may differ somewhat from amounts calculated by individual law firms due to timing and classification of certain services.

The amounts are obligations reported by agencies, not necessarily the amount pocketed by law firms. 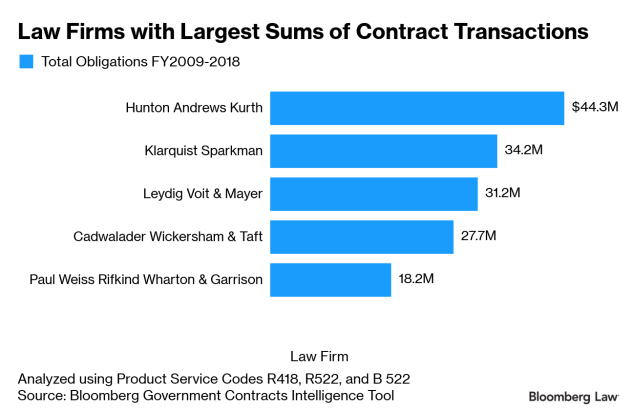 Like other agencies, the purpose of the contracts range from the predictable to the unique. For example, the EEOC awarded some of the largest contracts to state employment commissions, like those in California and New York, which execute similar anti-discrimination goals for the agency. The National Labor Relations Board only awarded one contract related to legal support, analysis, or litigation during the ten year period, to J. Allen Kosowsky, which offers forensic accounting services.

Leydig Voit & Mayer and Paul Weiss did not respond to multiple requests for a comment on this story. Cadwalader declined to comment.

Law firms offer a plethora of services to the federal government, depending on agency needs or required outside expertise. Some of the major firms on the list of government contractors don’t do legal work directly for the government frequently, but have landed a few large projects, which boosted their numbers.

For example, some of Hunton Andrews Kurth’s largest contracts are with the Government National Mortgage Association, also known as Ginnie Mae.

The government uses its own lawyers, but might turn to a firm for help if a job requires a niche skill, Wiley Rein partner Paul Khoury said. Khoury counsels and represents government contractors in both litigation and procurement processes.

“When you get into trademark or patents, for example, and where you’re talking about a significant volume of work, it may make more sense to reach out to a law firm with that kind of expertise,” Khoury said.

Klarquist’s first services contract was awarded in 1996, according to Noonan.

“The NIH has awarded Klarquist subsequent contracts since then, most recently a 10-year contract that began in 2009,” Noonan said. “Although the NIH also selected several other nationally prominent patent firms in 2009, Klarquist was the only firm to be chosen to do patent work in all three technology fields [biotechnology, chemistry, and mechanical/electrical/software].”

The Bloomberg Government analysis didn’t include the category “Support Professional: Patent and Trademark,” which could alter the contract totals for Klarquist specifically, considering the firm specializes in patent counsel.

The process of procuring outside legal counsel is subject to federal contracting rules, just like any other service the government may employ, but there are exceptions.

Contracts are supposed to be advertised to “promote and provide for full and open competition,” but a competitive process can be bypassed if an expert service is being offered, like litigation.

There are also other exceptions to the competition requirement: compelling urgency, national security threats, or public interest can exempt an award from the due competitive process.

Additionally, oversight of the procurement process is limited. The Government Accountability Office doesn’t proactively monitor whether a contract is competitively awarded or not. GAO only adjudicates bid protests, which competitors can bring if they feel a contract was unfairly awarded.

It’s unknown whether more contracts are awarded competitively or not, but it is in the best interest to follow the competitive process, based on how many firms there are, Project on Government Oversight general counsel Scott Amey said.

“The government should be competing these services so they get not only the best prices, but the best services that they can acquire,” he said.

With so many experts, it could also be hard to justify the “expert” exemption from competitive due process, he said.

“If the government is seeking very narrow expert legal advice, there may be a limited candidate pool, but I would be surprised if there’s only one law firm or lawyer in the country that can provide certain legal services,” he said.