A small Labor Department agency with sizable oversight is looking closely at Big Law firms like Morgan Lewis & Bockius, Fox Rothschild, and Paul Hastings, as part of its mission to address compensation and promotion practices in the legal industry.

The DOL’s Office of Federal Contract Compliance Programs recently cautioned law firms that do work with the federal government that it will be closely analyzing how their employment practices affect diversity. At least 10 firms will be audited by the OFCCP in 2019, and the agency’s director Craig Leen said investigators may target the legal industry in particular in future probes.

The agency announced the audits as big law firms are facing a wave of litigation over alleged discrimination against women and people of color.

The OFCCP enforces equal employment opportunity laws for federal contractors, and many law firms hold government contracts above $10,000, bringing them under the agency’s jurisdiction. That means the office can hold contractors’ feet to the fire if a firm is found to be breaking federal equal opportunity law, by either reaching a financial settlement or pursuing litigation, which could result in debarment.

The contractor watchdog is also unique in that it can compel any entity it audits to turn over compensation and demographic data, unlike other federal civil rights agencies. It’s also not limited to the employees working on the contract—the OFCCP can scrutinize data on all employees at an audited site, as well as job applicants seekers who sought positions there.

“You need to take a look at what’s happening because you are the examples to the world of compliance with the law,” OFCCP director Craig Leen said at a town hall-style meeting in New York on April. 10. “It’s important that you never be in a position where you are viewed as being hypocritical or not following the legal advice that you give to others.”

It was this study that Leen cited when he said the agency will look into representation at the highest levels of law firms.

“These numbers are glaring, they are concerning, they are troubling, they are problematic and they’re systemic,” Leen said. “There is a big problem at law firms for women, and women of color, at the highest equity positions. That’s hurting this country and hurting law firms.”

“We’re really early on in a moment of widespread interest in the practices of law firms,” Sanford Heisler Sharp partner Alexandra Harwin said. “It’s really heartening to see the government jump in to this fight relatively early on in it.”

The pool of law firms that have chosen to contract with the federal government is relatively small considering the Justice Department typically represents agencies in litigation. Independent legal advisers have been brought in to work on everything from engineering projects to software purchases, according to a Bloomberg Government analysis.

From Jan. 1, 2011, through April 19, 2019, the federal government oversaw 6,555 contracts with private practitioners, totaling $4.5 billion, according to a Bloomberg Government analysis.

“Generally speaking, OFCCP has been conducting compliance reviews of law firms for years,” Littler management attorney Lance Gibbons said. “So, in many respects, this is not new ground.”

“At some point, you will see a focus on those industries because of some of the very concerning statistics about representation of females and minorities in the highest positions,” Leen said, indicating that the focused reviews could come in the next fiscal year.

At least 45 law firms have closed OFCCP audits in fiscal years 2011 through 2018, including Foley & Lardner, Hunton & Williams, and Sidley Austin, according to a Bloomberg Law analysis of the agency enforcement database, using a North American Industry Classification System code for “Offices of Lawyers.” The agency closed no audits of law firms in 2018, which was also the year with the fewest total number of completed audits in more than a decade.

At least 20 of the 65 firm locations that have been audited since 2011 were found to be out of compliance with federal contractor equal employment obligations, with one allegation of hiring discrimination and one allegation of accommodation discrimination. However, none of the firms reached any financial settlement with the OFCCP, only agreeing to change their current practices to abide by federal obligations. 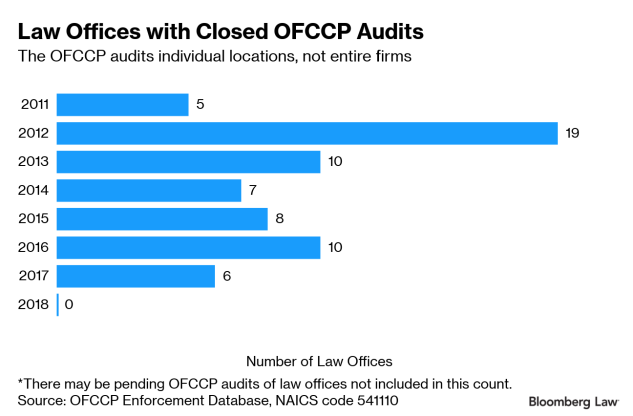 Law firms made up less than 1 percent of all contractor locations audited from 2011 through 2018—the agency completed 22,203 audits during that time.

One firm—Shapiro, DiCaro & Barak—opted to be barred from government work in 2014 rather than turn over documents requested by the agency.

The OFCCP has said that it is specifically targeting bias in pay and promotion decisions, both serious problems in the industry, attorney Alissa Horvitz of Roffman Horvitz said. It’s also more than just looking at isolated decisions, which are based on longstanding cultures at firms.

“It is going to be hard for the OFCCP to evaluate law firm diversity (whatever that really means) if it doesn’t first appreciate the culture of the firm, and they are all so very different,” she said in an email.

Pay at firms is primarily determined by the lockstep compensation model for entry-level positions, but as employees have been with the firm for several years, pay can be affected by factors like performance or specialty, she said.

Promotions are similarly variable; some firms are transparent about what it takes to reach the partner level, while others are not.

“Some firms are going to be very transparent about the process, the number of years it typically takes, and have very open conversations with its associates along the way,” Horvitz said. “Others will not, and in my opinion, the firms that are not as transparent with their associates and with their pay structures at the partner level are the ones who find themselves in litigation over fair pay issues.”

— With assistance from Jasmine Han