Some workers and employers are uncertain about what’s prohibited under a federal law against sex discrimination in the workplace in light of a patchwork of legal interpretations.

“For large national employers, regardless of how Title VII is interpreted, you have some number of states, cities, or federal contractors who have explicit laws that clearly protect employees from discrimination based on sexual orientation or gender identity,” Mike Eastman, managing counsel at NT Lakis, told Bloomberg Law. NT Lakis helps large employers comply with workplace obligations.

Several federal appeals courts in recent years have reached different conclusions about whether Title VII of the 1964 Civil Rights Act prohibits discrimination based on sexual orientation or transgender status. The Seventh Circuit in April 2017 became the first to rule that sexual orientation discrimination is a form of sex discrimination. The Second Circuit joined it in February 2018. The Eleventh Circuit, meanwhile, reached the opposite conclusion in March 2017. The circuit split has fueled speculation that the U.S. Supreme Court will take up the question. 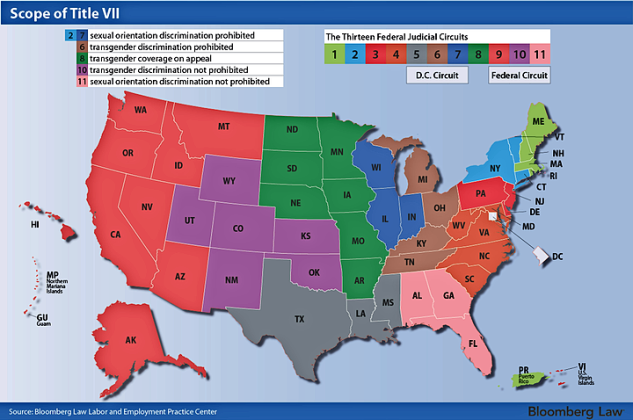 Several cases rely on precedent in which the U.S. Supreme Court established “sex stereotyping” as a prohibited form of sex discrimination. The court ruled that a woman could prove a discrimination case because she didn’t carry herself the way stereotypes about how women behave suggest she should.

The Eleventh Circuit compared discriminating against a transgender person to stereotyping on the basis of “gender-based behavioral norms” in a 2011 ruling. The Sixth Circuit earlier this year expanded its interpretation of Title VII and said a worker can bring a sex discrimination claim based on transgender identity alone, without having to go into stereotyping. In the ruling, the Sixth Circuit also rejected the employer’s argument that its action was protected under the Religious Freedom Restoration Act.

Differing views have been voiced within the executive branch. The Equal Employment Opportunity Commission, which investigates charges of discrimination under Title VII and enforces it in private sector and federal workplaces, holds the expansive view of the law’s scope on sexual orientation and transgender status. The Justice Department, which enforces Title VII in state and local public sector workplaces, takes the narrower view with respect to sexual orientation and transgender status.

Employers are trying to deal with “real practical challenges” rather than the question of “is it covered or not?” Eastman told Bloomberg Law. As examples, he listed questions employers with transgender employees ask: “What’s the best way to deal with a transitioning employee? What are the sort of things we have to think through? What kind of plans are we going to make? How can we be helpful?”

Employers ask these questions because they’re concerned with doing what’s right, not with doing the minimum that the law says, he said. “There’s good reason to go beyond what the law requires,” he said. “They rarely say they’re going to have an anti-harassment policy that just barely satisfies Title VII.”

Fifth Circuit May Be Next

One circuit that hasn’t ruled on sexual orientation or transgender discrimination under Title VII is the Fifth Circuit. It covers federal courts in Texas, Louisiana, and Mississippi.

Recent rulings in other circuits were persuasive for concluding that Title VII covers transgender status, Judge Lee H. Rosenthal of the U.S. District Court for the Southern District of Texas said. She ruled against Wittmer because the evidence showed Phillips 66 rescinded her job offer for reasons unrelated to her sex. “The record shows no evidence that Phillips knew about Wittmer’s status as a transgender woman until after it had decided to rescind the offer,” she wrote.

Even though Rosenthal ruled against Wittmer, her lawyer was encouraged that Rosenthal took a more expansive view of Title VII.

“While we are certainly disappointed that the judge didn’t see this particular set of facts in a way to allow Ms. Wittmer to get to a jury, what she did say is if you’re transgender, you’re allowed to get protections under law,” Alfonso Kennard with Kennard Law, P.C. in Houston, told Bloomberg Law.

Kennard “can’t say at this time” whether Wittmer will appeal to the Fifth Circuit. But even if Rosenthal’s ruling is the last word in Wittmer’s case, it will be persuasive for other Title VII transgender discrimination cases, he said. “Anyone looking to make sense of the current status of law on this topic in the Fifth Circuit needs look no further than this order by Judge Rosenthal,” he said.

A ruling against a transgender worker that embraces an expansive view of Title VII isn’t a complete loss, Shawn Meerkamper, a staff attorney with Transgender Law Center in Oakland, Calif., said. “The plaintiff won on the law but lost on the facts,” Meerkamper told Bloomberg Law. A ruling like this lays the groundwork for more rulings in favor of broad Title VII coverage, they said.

Proceeding with a patchwork of Title VII interpretations at the trial and appeals court levels isn’t ideal, said Greg Nevins, employment fairness project director for Lambda Legal, an LGBT civil rights advocacy group. Lambda Legal and Transgender Law Center are and have been involved in cases urging a more expansive interpretation, either by directly representing workers or filing amicus briefs.

“That is at least an issue by proceeding with judicial rulings rather than statute that it can leave an issue where people’s rights are less clearly understood by employers and workers and judges and lawyers,” the Atlanta-based Nevins told Bloomberg Law. “Even though I adamantly believe that Congress already passed a law that protects the LGBT community from discrimination in employment, it wouldn’t be a bad idea if they passed one that makes it explicit.”