Democrats, who take control of the House Jan. 3, want to chat with various administration officials.

Committee leaders are planning to step up their oversight of federal agencies by requesting information and documents and calling hearings after the new majority is seated. They can’t directly stop agencies from making regulatory and other moves, but they can slow the process down and make administration officials think twice about some agenda items.

“When you know you’re going to be called up in front of Congress, you’re going to be much more hesitant about trying to do anything controversial,” a Seyfarth Shaw LLP lobbyist who previously ran the Chamber of Commerce’s labor policy shop, told Bloomberg Law. “That puts a yellow flag of caution in front of everybody.”

Here are some of the officials likely to be near the top of House Democrats’ hearing invitation list. 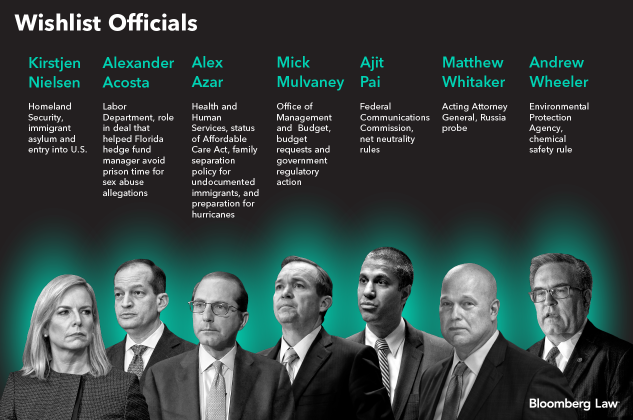 Democrats want to know how Acting Attorney General intends to oversee Special Counsel Russia probe, given that Whitaker has been an outspoken critic of the investigation.

“President Trump installed Matthew Whitaker as acting AG for one purpose: to end the investigation,” House Minority Leader (D-Calif.) told reporters shortly after Whitaker was tapped for the acting job.

Whitaker will be the first witness called before the House Judiciary Committee come January, incoming chairman (D-N.Y.) has said. The committee is also likely to probe reports that Whitaker falsified his credentials on his resume.

Homeland Security Secretary is still on the job, despite reports she’s planning her exit. If House Democrats catch Nielsen on the way out, they’re likely to ask about a wide range of immigration policies.

“As we move into the next Congress, I want to put you and your department on notice,” Nadler told Nielsen in a Dec. 20 hearing. “The time for accountability has arrived.”

The committee will look into what the Department of Homeland Security is doing to protect the safety of undocumented immigrants crossing the southern border, a concern highlighted by the death of a 7-year-old girl apprehended after crossing into New Mexico and an 8-year-old boy from Guatemala who died on Christmas Eve. The department’s recent announcement that it won’t allow immigrants seeking asylum in the U.S. to remain in the country while their legal cases are pending is also drawing questions.

Nielsen said following the second death that the DHS is taking a series of “extraordinary protective measures,” including requiring a “thorough medical screening of all children” in Customs and Border Protection custody.

“As a result of bad judicial rulings from activist judges and inaction by Congress, we are seeing a flood of family units and unaccompanied alien children, Neilsen said in a statement. “The unprecedented number of families and unaccompanied children at the border must not be ignored.”

Rep. (D-Md.), who will chair the Oversight and Government Reform Committee, told Nielsen earlier this month that he wants to know what the DHS is doing to address concerns of retaliation against whistleblowers inside the department.

Trump’s acting chief of staff, could be summoned to answer questions about what’s going on behind the scenes in the Oval Office because he plans to stay on as OMB director indefinitely.

Lawmakers also have plenty of questions about OMB’s role in shaping Trump budget requests and overseeing government regulatory action. The list includes a Labor Department rule on tip sharing cleared by the White House after an economic analysis showing the regulation could allow restaurants and other businesses to skim hundreds of millions of dollars from workers was omitted from the proposed rule.

“Assuming [Mulvaney] can still be brought up, he would be one of the most appropriate officials to testify” about the tip poll snafu, a regulatory policy advocate for Public Citizen, told Bloomberg Law.

Mulvaney may look to skirt congressional hearings by saying he’s acting more as a figurehead at the OMB these days, Narang said. That could shift the questioning to OMB regulatory chief Neomi Rao, who’s still serving in that role while waiting for the Senate to take up her nomination to fill Supreme Court Justice seat on a federal appeals court in Washington, D.C.

Democrats are waiting to see if the Justice Department’s inspector general takes a look at the case before calling for hearings and other investigations. Incoming House Education and the Workforce Committee Chairman (D-Va.) is among those who’ve asked the DOJ watchdog to step in.

“I assume the inspector general will look into it and hopefully make a report,” Scott told Bloomberg Law. “If action needs to be taken, it will probably be in the Senate that confirmed him. We will just see what the inspector general does. I would expect an investigation, and we will know what to do after that.”

In the meantime, Scott is likely going to want to talk with Acosta about a few other issues. The tip pool fallout and a DOL proposal to loosen restrictions on teenage workers in certain health-care jobs are priorities.

“The Department of Labor will continue to engage with members of Congress, including committees of jurisdiction,” a department spokeswoman told Bloomberg Law.

Rep. (D-N.J.), the incoming chairman of the Energy and Commerce Committee, said beyond Acting Environmental Protection Agency Administrator Andrew Wheeler, he expects to bring top EPA officials before the panel.

Others include the yet-to-be confirmed head of the EPA office that oversees a federal chemical law revised in 2016.

Trump nominated Alexandra Dunn to lead EPA’s Office of Chemical Safety and Pollution Prevention, and she has not been confirmed by the Senate, though Senate Democrats have reacted favorably to her nomination. Pallone said if confirmed, Dunn is likely to be called before his energy committee to address complaints that the EPA has eased chemical regulatory requirements instead of strengthening them as required under the 2016 law.

Rep. (D-Ariz.), the next chairman of the House Natural Resources Committee, said he, too, will be bringing before the committee EPA and Interior Department assistant administrators and office directors, though he didn’t name specific administrators.

Skyrocketing drug prices, opioids abuse, Medicare funding, and insurance affordability were some of the top issues percolating during Health and Human Services Secretary Senate confirmation roughly one year ago. House lawmakers are likely to ask for a checkup.

The inquiries may start with gauging how the HHS will respond to a Texas court decision finding Obamacare unconstitutional. That includes what the decision means for the millions of people who signed up for insurance through the Affordable Care Act for next year.

Cummings also recently sent Azar letters asking about the department’s involvement in family separation policy for undocumented immigrants and in preparing for hurricanes.

Pallone has vowed to hold “regular oversight hearings” with all FCC commissioners. Pai leads the FCC, which regulates television, internet, radio, and other forms of communication.

Democrats are expected to scrutinize the FCC’s repeal of Obama-era net neutrality rules, its easing of media ownership regulations, and efforts to expand internet access to rural areas, among other issues. They also have some concerns with the speed of Pai’s own communications, complaining that he has answered their inquiry letters slowly, if at all.