Larry Kudlow, director of the National Economic Council, speaks as President Donald Trump looks on during a briefing on the coronavirus pandemic.
Photographer: Drew Angerer/Getty Images

Businesses that reopen during the coronavirus pandemic likely won’t be completely off the hook if workers and customers fall ill, even as the Trump administration looks at ways to ease employers’ liability concerns.

President and White House economic adviser said this week that the administration is exploring protections for business from certain legal risks related to reopening. Kudlow described the idea as a “guardrail” of sorts, but stopped short of any concrete proposals.

Business lobbyists say it’s unlikely that the administration could successfully create a broad shield protecting companies from potential personal injury, workplace safety, and other litigation. Some are looking instead for a targeted response that would ease some of the risk at the federal level.

“There is a worry about lawsuits, but I think the idea of some kind of a ‘safe harbor’ for employers from all forms of liability is a bit of a pipe dream,” Randy Johnson, a corporate lawyer for Seyfarth Shaw in Washington, told Bloomberg Law. “Various opponents, like Democrats, the plaintiffs’ bar, and organized labor, would line up against anything like that.”

“It’s also highly unlikely that this Congress is going to do something to change the personal injury laws in all 50 states,” said Johnson, formerly the top labor lobbyist for the U.S. Chamber of Commerce.

That leaves some businesses pushing items like a “good Samaritan” protection for health-care operators and others at the front line of the health-care crisis, Johnson and others said. They also want provisions in the next relief package that would allow companies to provide protections and benefits to independent contractors without having to make them employees, and to offer “hazard pay” to workers without having to also increase their overtime rates.

Any new limits on liability are likely to be hard fought on Capitol Hill. Democrats are pushing to expand protections for workers in the next relief package, including by forcing the Labor Department’s Occupational Safety and Health Administration to create emergency workplace safety requirements.

“Shielding companies from liability in the ways being discussed is one of the more appalling things I’ve heard in the context of this crisis,” said Judy Conti, who lobbies for the National Employment Law Project. “It’s particularly important that we hold employers liable for safe conditions given how easily Covid spreads, and how widespread the ramifications of workplace contamination could spread.

Tackling Torts Is a Tall Task

Business groups have been clamoring for federal protections against liability as part of the legislative relief packages moving through Congress. Much of the push has focused on “essential” businesses allowed to operate during shelter-in-place orders across the country.

“There is an emerging threat to their ability to continue serving customers: efforts by some to take advantage of the current crisis to file unfounded lawsuits against them alleging that customers and employees were infected with COVID-19 because the nation’s essential critical infrastructure businesses kept operating,” a group of business associations said in a letter last week.

Some lobbyists have pointed to the relief effort after the Sept. 11 terrorist attacks as a possible guide. Federal legislation required some benefits recipients to waive the right to bring lawsuits and limited liability for certain companies working on national security matters.

The U.S. Chamber of Commerce is in communication with White House officials, according to Harold H. Kim, president of the Chamber’s Institute for Legal Reform. Kim, who called the recent comments from Trump and Kudlow “encouraging,” said protecting companies from liability if they abide by federal Centers for Disease Control and Prevention and state guidelines for social distancing and other measures would go a long way to encourage them to open their doors.

That would likely require preempting state laws, Kim and Roger King, a corporate lobbyist with the HR Policy Association in Washington, told Bloomberg Law. Such a proposal is nearly certain to spark debates over federalism and states’ rights.

Workers’ compensation and personal injury laws—two of the primary tools for workers and consumers who contract coronavirus—are governed by states. Although federal agencies could ease up enforcement of pay, workplace safety, discrimination, and other protections, workers and their lawyers can still often take their cases directly to court.

“There’s been a lot of discussion, but I haven’t seen any cogent answers,” King said.

States like New York, New Jersey, Illinois, Michigan, and Mississippi have already moved to protect certain health-care providers from liability for injuries and deaths while treating the virus, except for those caused by gross negligence.

Florida state Sen. Jeff Brandes (R) told Bloomberg Law on Wednesday that he’s in the “early stages” of drafting legislation that could similarly shield a wider range of businesses. The bill would create “a safe harbor for businesses that are following the published guidelines” from the White House, the CDC, and the state, he said. 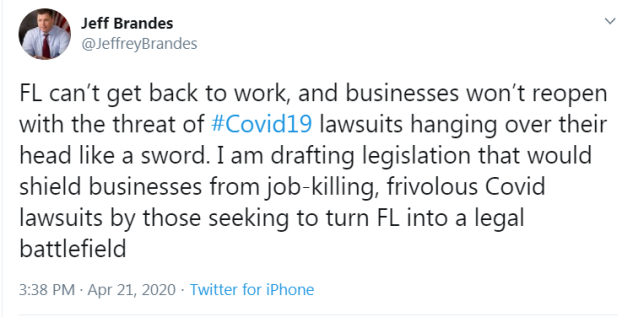 Brandes said he’s looking to existing “safe harbor” provisions for hospitals and other essential businesses as a model, but hedged that the bill is still in its early stages.

“The state has declared those businesses essential,” he said. “It doesn’t seem that we should open them to liability just because we’ve deemed them essential.”