Business owners, especially those in the health care and retail industries, face a growing number of “third-party” or customer-on-employee harassment lawsuits.

But such claims are just part of the mix of new and old potential liabilities businesses expose themselves to in the #MeToo era if they fail to police sexually or other abusive behavior in their workplaces, management-side lawyer Fiona Ong told Bloomberg Law.

Employers that have faced or are facing third-party harassment claims, or claims under other liability theories, range from well-known public-facing businesses like Costco, Sunoco Inc., and Wells Fargo Bank, to lesser-known, more exclusive ones, including a private boarding school in Minnesota. Alleged victims have included a bartender, an auto parts delivery driver, and a plumber.

Courts recognized two new potential avenues of liability in late January, at least for businesses in Maine and Washington state, said Ong with Shawe Rosenthal LLP in Baltimore. Washington state’s top court ruled that employers who serve the public may be strictly liable when an employee harasses a customer.

And a new federal appeals court ruling shows that the kind of employees an employer has to worry about also is growing, making them potentially liable for others’ employees when they knew, or should have known, about the hostile environment those employees worked in.

“There are all different ways to get at” harassment in the workplace, Ong said.

Third-party harassment involves abusive behavior directed at a worker by a customer or other non-employee. Ong’s sense is that such claims are on the rise.

Bloomberg Law research supports that observation. Between 2000 and 2005, a period when more federal appeals courts began to credit the theory, only a handful of lawsuits show up on federal court dockets involving allegations that a customer or other non-employee mistreated a worker.

Employers, by contrast, were hit with at least 20 or more lawsuits containing third-party harassment allegations in each of the past three years. 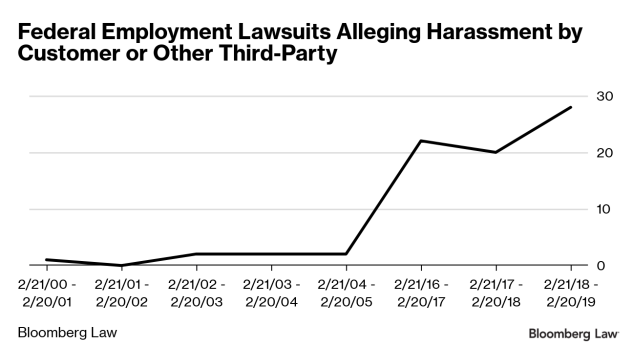 These lawsuits have mostly targeted healthcare providers and suppliers, restaurants and other retailers, transportation companies, and the recreation and entertainment industry.

Changing workplace dynamics and relationships resulting from the rise of the gig economy, growth of worker outsourcing, and other developments may account for part of the increase.

There’s also are much much more sensitivity now about what employers need to do to protect their employees, she said.

Some employment, such as working with inmates or detainees or in strip clubs, for example, may have previously been seen as carrying an unavoidable risk of some harassment “as part of the job.” Now it’s more widely recognized that behavior in those settings can, and does sometimes, cross the line, Ong said.

The question, Ong said, has instead become, “Where do you draw the line?”

A recent Fifth Circuit case, which focuses on physical threats and behavior and what an employer did or didn’t do to prevent or end harassment, does a good job of laying out the analysis, she said.

The rise of the #MeToo era has served as a reminder that employers may also be held liable for harassment under traditional tort theories, such as assault, battery, and negligent hiring or supervision. Special duty-based laws also occasionally come into play.

The U.S. Court of Appeals for the First Circuit’s late January ruling recognizes an additional risk for companies doing business in Maine. It held that a prison may be responsible for a hostile work environment created for its workers by an employee of a contractor who worked at the prison.

The Washington Supreme Court’s January decision in Floeting v. Group Health Cooperative also has “got to be a serious concern for employers” that operate businesses that are open to the public, Ong said.

The state justices held that business owners are strictly liable under the state’s public accommodations law when an employee harasses a customer or patron. They rejected by a 7-2 vote the business owner’s call to apply the negligence standard courts typically use to evaluate co-worker or third-party harassment claims.

Evidence an employer knew or should have known its employee was engaging in abusive behavior toward a customer, and that it could or should have done more to stop or prevent the harassment, isn’t needed, the top court said.

The ruling is limited to Washington businesses, but most states and many local governments have their own public accommodation laws, as does the federal government. Whether those laws might be interpreted consistent with Floeting is unclear.

In addition, the general definition of “public accommodation” is broad and includes almost all service, sales, and rental establishments, educational institutions, and recreational facilities.

Ong sees Floeting, the First Circuit case, and other recent developments as opening up “a whole new world.”

Businesses need to re-examine and adjust their anti-harassment policies and training accordingly, she said. They should do so regardless of how the law in their state is or might be interpreted, Ong said.

The EEOC has done a “tremendous job” of providing employers with guidance on best practices for preventing workplace harassment, Ong said.

But plaintiffs'-side attorney Lindsay Halm thinks “any hand-wringing” by employers over Floeting “is probably overly dramatic.”

An employment relationship is by nature ongoing, which gives the business owner a chance to “correct course” when it becomes aware of abusive behavior, she said. Most consumer relationships aren’t sustained over the course of hundreds of transactions, and many are one-off, Halm said.

The distinction between the workplace and public accommodation provisions is “the sort of line legislatures draw all the time,” she said. Halm is with Schroeter Goldmark & Bender in Seattle and represented the Fred T. Korematsu Center for Law and Equality as an amicus in Floeting.

She doesn’t foresee a rush of harassment claims against businesses that are also places of public accommodation. The general lack of a long-term, ongoing relationship with the victim means “there’s often not an economic loss component,” such as when harassment or related retaliation of a worker causes the victim to lose a job, Halm said.

And, anyway, Halm said, “If businesses are really serious about cracking down on harassment, the different standards shouldn’t hold them back.”