Sen. Joe Manchin (D-W.Va) speaks to members of the media at the U.S. Capitol in Washington, D.C., in April 2022.
Photographer: Eric Lee/Bloomberg via Getty Images

Groups and lawmakers advocating for Democrats’ domestic agenda, from clean energy to health care, are renewing campaigns tailored to their target audience: .

Labor groups recently held a tele-town hall for West Virginians to talk about the need to expand home care offerings. The Service Employees International Union recorded a robocall with actress Jennifer Garner, a native of the state, urging West Virginians to call their senators and ask for action on home care.

Many of Democrats’ priorities are unlikely to receive enough bipartisan support. To get favored measures through in a sweeping package with a simple majority, they need to convince the West Virginia senator to get on board by addressing his concerns about growing inflation and the problems facing his home state.

The effort comes as Manchin and Majority Leader have restarted talks on a reconciliation bill (H.R. 5376). They met again this week to discuss a potential deal, according to an aide granted anonymity to speak candidly.

“That’ll be the point from which all things flow,” LaBombard said. 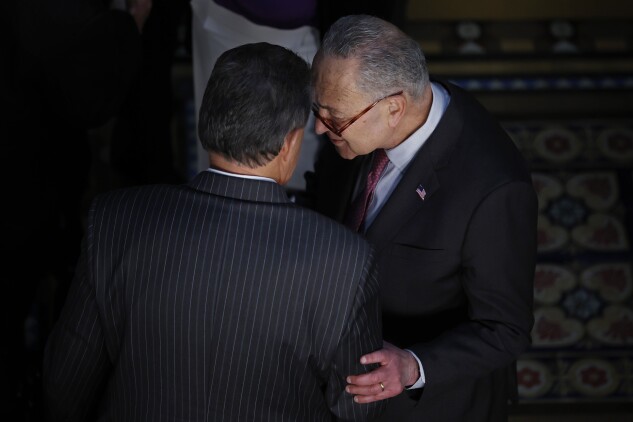 Spokespeople for Schumer and Manchin didn’t respond to requests for comment on provisions sought by activists.

The recent campaigns aren’t the first time groups have targeted Manchin specifically since Democrats took a slim, 50-vote majority in the Senate. But many activists see the next few months as a make or break moment for their priorities, adding to pressure to sway the key vote.

Child-care advocates rallied outside the Capitol last week in favor of a proposal from Sens. (D-Wash.) and Sen. (D-Va.) that would increase funds to states for child care and early childhood education, bringing the block grants to $72 billion in new funding over six years.

“He clearly is hearing” arguments for child-care spending, Kaine said of Manchin in a brief interview. “And look, he’s hearing it from his own constituents.”

The New Democrat Coalition, the party’s largest House caucus, called this week on leaders to pass a reconciliation package that includes a permanent extension of boosted Affordable Care Act (Public Law 111–148) tax credits, subsidies that lower insurance premiums for millions set to expire at the end of this year. The press conference included Jessica Ice, executive director of West Virginians for Affordable Healthcare, a group that’s pushed for bolstering the ACA based on how it would help West Virginia.

Rep. (D-Calif.), one of the coalition’s vice chairs, said “it hasn’t been a point of contention with Senator Manchin.”

However, on the other side of the issue, the 60 Plus Association—a group that bills itself as the conservative alternative to AARP—spent nearly $55,000 on ads at the beginning of June lambasting Manchin for “supporting Biden’s devastating plan to strip $300 billion from Medicare.” The group opposes Democrats’ plan for decreasing drug prices, which would lower government spending on medicines by nearly $300 billion over 10 years, according to a report from the Congressional Budget Office.

Separately, miners with black lung disease and their families have also launched a “We’re Counting on You, Joe” campaign online and in radio ads urging Manchin to help pass a long-term extension of the black lung excise tax on coal companies. Manchin last month said he hopes his stand-alone legislation (S. 2810) to extend the tax rate will end up in a larger legislative package.

“Like many others, we’re hopeful that a budget reconciliation framework comes together and that a multi-year extension of the excise tax is included in that,” said Rebecca Shelton, the director of policy and organizing for the Appalachian Citizens Law Center.

House Democrats along the ideological spectrum on Thursday also urged the Senate to include climate and energy provisions in the package.

Speaking at a Capitol Hill press conference, Congressional Progressive Caucus Chair (D-Wash.) said it’s “incumbent” on Manchin, who leads the Energy and Natural Resources Committee, to support the climate provisions in reconciliation that the House ultimately crafted to his liking.

The measure the House passed included energy and climate language that was “reduced from what we originally wanted because we knew we needed to get his support,” Jayapal said.