The dome of the New Hampshire state Capitol in Concord.
Todd Warshaw//Pool/Getty Images

Every congressional race has its own parochial issue. In New Hampshire, it might be Bitcoin.

An outsized number of Republican candidates for federal or statewide offices this year in the Granite State are either personally or politically invested in cryptocurrencies, setting New Hampshire apart from other battlegrounds ahead of the midterms.

Like the assets they’re boosting, these federal candidates are underdogs against establishment favorites in the Sept. 13 primaries. But their election would boost the growing cadre of lawmakers in Washington eager to sway the regulatory future of the burgeoning and volatile cryptocurrency market.

“I think the culture of New Hampshire—Live Free or Die, it’s in our motto—there’s a lot of people involved in public service in New Hampshire that really believe in freedom,” said Tim Baxter, a Republican state legislator and congressional candidate who owns cryptocurrencies. “That’s why you see probably more people, than most other states for sure, that are advocating for laws that allow Bitcoin to flourish and allow people and businesses and consumers to adopt it if they want to.” 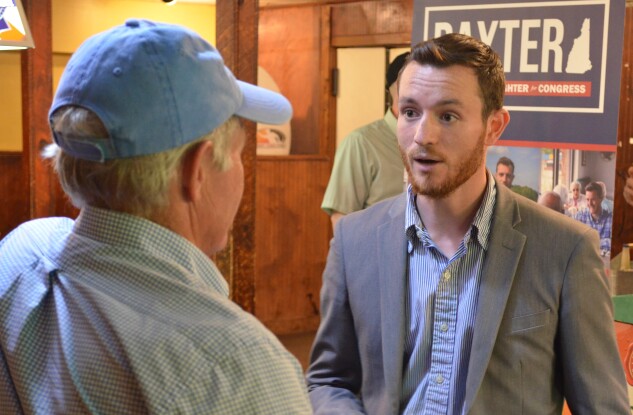 Baxter is hoping to challenge Rep. (D-N.H.), whose re-election race the Cook Political Report with Amy Walter rates as a toss-up in November. The same analysts say the path to victory for Sen. ‘s (D-N.H.) Republican challenger is steeper since she’s narrowly favored to win another six-year term.

Half of the field of candidates for the Republican nomination to face Hassan this fall personally own cryptocurrencies. That includes Vikram Mansharamani, who this month reported owning at least $1 million in various cryptocurrencies on the exchange Coinbase.

“What is it about New Hampshire that makes this possible?” Mansharamani said in an interview at a coffee shop in Concord, the state’s capital. “First of all, this Live Free or Die mentality, which is, you know, we don’t need you treading on me, my family, my business.”

Mansharamani, who wrote a book on the boom-and-bust cycle of markets, first bought crypto in 2017 when observers thought Bitcoin was due for a crash. He’s still bullish on cryptocurrency and thinks it “might” replace the dollar as the global standard.

“Will it go down and up? Yes. Will it have volatility? Yes,” Mansharamani said. But Bitcoin will “absolutely” gain value in the years to come, he said, adding: “I’m gonna hold onto it for now.”

Candidates say they’ve invested in cryptocurrencies—digital assets subject to little regulatory oversight—for the same reasons others did: as an extension of their faith in smaller government and as a remedy for investors struggling with inflation.

Other New Hampshire candidates for federal office this year have made cryptocurrency a cornerstone of their campaigns. Bruce Fenton, a digital assets manager and Republican candidate for Senate, last week touted his cryptocurrency work as evidence that he could work across party lines if elected.

The cryptocurrency business is “an industry with a lot of infighting,” Fenton told the packed audience attending a Newsmax debate at Saint Anselm College, “and I’m known in my career as somebody who gets along with everybody.”

Perched on a piano bench after the debate in one of the college rooms, Fenton in an interview pointed out that an outsized concentration of cryptocurrency businesses call the Granite State home.

That includes his own. The former Bitcoin Foundation executive director said he founded Chainstone Labs, a digital securities asset management company, in Portsmouth, N.H. in part because of the state’s libertarian ethos. Fenton said New Hampshire’s cryptocurrency industry also benefits from the state’s low taxes and proximity to Boston’s educated and tech-oriented workforce.

“I wanted a good location for those businesses, and New Hampshire fit the bill,” Fenton said. In March, he said he would loan his campaign $5 million from his crypto wealth.

Other candidates have also dabbled in owning cryptocurrencies. Baxter, the state representative seeking the Republican nomination to challenge Pappas, this month disclosed owning at least $15,000 in cryptocurrencies.

Kevin Smith, another Republican candidate for Senate, reported holding less than $1,000 in Bitcoin on the Coinbase exchange.

Smith, in an interview at his campaign office in Londonderry, N.H., where he previously served as town manager, said he bought Bitcoin last year when it “was really going gangbusters.” He acknowledged his personal share of Bitcoin is “nowhere near worth what they were when I bought them.” Bitcoin has lost about 70% of its value since November high last year, according to the Bloomberg Galaxy Bitcoin Index.

“I wasn’t going to bet the farm on it, but it’s one of those things where you never know where it’s going to go,” said Smith. “You know, I’m not terribly risk adverse, so I thought, ‘why not throw a few dollars into it?’”

Hassan in the last year has ramped up her scrutiny of the industry after hackers stole and converted $2.3 million from a southern New Hampshire town into cryptocurrencies. She has urged federal agencies to crack down on criminals’ access to cryptocurrency exchanges, increase oversight of crypto mining at home and abroad, and probed mining companies’ high energy use.

Republicans looking to represent New Hampshire in Congress are largely skeptical of federal regulation of cryptocurrencies. Chuck Morse (R), president of the New Hampshire Senate and also a candidate for the US Senate, at the Newsmax debate said “the federal government needs to be careful” with how it regulates cryptocurrencies and that it should only step in to prevent transactions by illicit organizations.

Mansharamani, in the interview, dismissed the Securities and Exchange Commission’s nascent efforts to oversee digital assets as “a textbook example of government overreach” and “bureaucratic meddling” Competition between the SEC and the Commodity Futures Trading Commission over their respective jurisdictions “is counterproductive to innovation” without protecting consumers, he added.

But while the cryptocurrency industry has grown “precisely because government has not been involved,” it now needs “jurisdictional clarity,” he said, invoking a frequent watchword in the industry.

“Now it’s growing up,” Mansharamani said. “Now, we have to worry about consumer protection. So how do we balance that?” 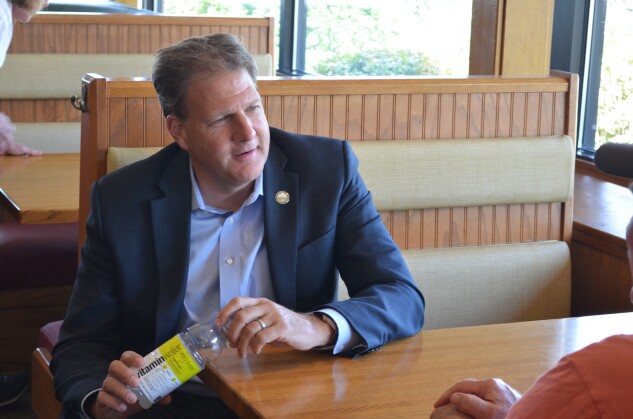 Baxter, in an interview at his bare-bones Manchester office, compared the current relationship between cryptocurrencies and the government to that of the Internet in the 1990s, when regulators took a largely hands-off approach. He said he similarly favored “a minimal framework or regulation that legalizes” cryptocurrencies and protects against theft.

“That’s really what I think most people in the industry want, and that’s more or less kind of what we got with the Internet,” Baxter said. “And I think that’s where we need to go.”

Fenton, however, said developing any sort of framework is “definitely a bad idea” that would burden businesses. As a registered broker, he said, “I understand the SEC probably better than anybody in Congress,” and as a senator he would want to “radically reform” or abolish the agency.

“The idea that government can or should even be involved in these transactions is sort of a flawed idea,” Fenton said.

Fenton said he was also skeptical of action by Congress, including legislation () by Sens. (R-Wy.) and (D-N.Y.) to overhaul the industry, which he said includes too many “nanny-state type” requirements.

That distrust of federal intervention is shared with the state’s leadership. New Hampshire Gov. (R) in an interview at a pizza joint in Exeter, N.H.—steps from his campaign office in the same strip mall—said he didn’t “trust” Congress’s leading cryptocurrency voices to regulate the young technology.

“I just don’t see a lot of the elected officials that I really feel like got past the executive summary page,” Sununu said between swigs from a bottle of Vitamin Water. “That’s probably the best way to put it. That’s as polite as I can be.”

As he seeks re-election to another two-year term in November, Sununu has sought to sell New Hampshire’s “nimble” bureaucracy, and its many state-sponsored trusts, as a “partner” to cryptocurrency companies. But he doesn’t want to emulate what he sees as lax rules like those of Wyoming and South Dakota, he said, because a deregulated industry “can invite bad actors.”

“Those trust companies don’t necessarily want the Wild West, and if they do, we don’t want them,” Sununu said.

To that end, Sununu in March formed a commission to study cryptocurrencies and digital assets, on which Mansharamani sat until he launched his campaign for Senate. Sununu estimated the commission would produce recommendations for possible changes to state laws and regulations that govern cryptocurrencies before the state legislature reconvenes in January.

“I’ve extended their timeline because I want it done right,” Sununu said.

To contact the reporter on this story: in Manchester, N.H. at zcohen@bloombergindustry.com