The National Football League Players Association paid nearly $5.2 million to more than a dozen outside law firms during its most recent fiscal year, with Winston & Strawn and Latham & Watkins racking up most of the fees, according to a recently filed financial statement.

An annual LM-2 filing made on May 28 with the Labor Department shows that the NFLPA’s outside legal fees remained mostly flat in the one-year period between March 1, 2020, and Feb. 28 of this year. The expenses were down slightly from the $5.4 million that the NFLPA paid its outside counsel during the labor union’s previous fiscal year, but higher than the $4.8 million in legal fees it incurred during 2018-19.

Media contacts for the Washington-based union, which represents the interests of the NFL’s players, didn’t respond to a request for comment about its legal costs. Winston and Latham, both longtime legal advisers to the NFLPA, collectively accounted for nearly $4.4 million of the attorney fees incurred by the union.

Winston, whose co-executive chairman Jeffrey Kessler is a veteran antitrust litigator and advocate for the interests of professional and amateur athletes, took the lead role representing the NFLPA on matters related to a collective bargaining agreement with the New York-based league. Winston received almost $3.5 million for its CBA work and providing other “professional services” to the union.

The NFL and its players finalized a new labor deal on March 15, 2020, just before the coronavirus pandemic began creating complications for U.S. professional and college sports. Line items for the NFLPA’s most recent LM-2 show that Winston continued advising the union even after it reached a new CBA with the NFL, which due to the spread of Covid-19 sought to curtail the activities of its players.

Other firms receiving money from the NFLPA solely for CBA-related work were Quinn Emanuel Urquhart & Sullivan ($230,500); Gibson, Dunn & Crutcher ($77,000); and Philadelphia-based Willig, Williams & Davidson ($66,300). PricewaterhouseCoopers, the Big Four accounting firm, was paid more than $563,000 by the union to advise on CBA-related issues, according to the NFLPA’s LM-2.

The union also paid more than $233,000 to Washington’s Groom Law Group—nearly $60,000 of which was for CBA work—and roughly $925,600 to Latham, about half of which was for “CBA matters.” The remainder was earmarked by the NFLPA for undisclosed “professional services.” 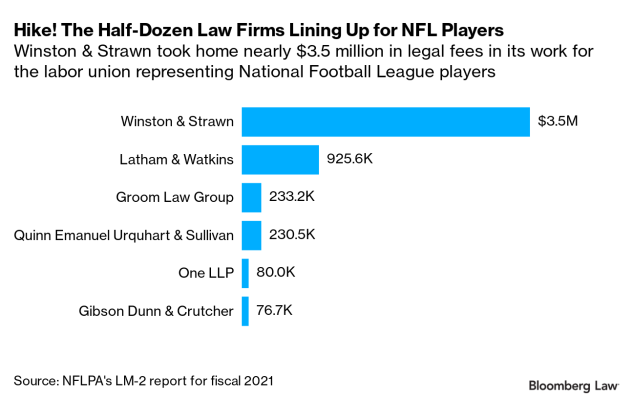 A Union Under Siege

Sports unions like the NFLPA have remained among the most powerful in their field at a time of declining influence for the global labor movement. The NFLPA’s leader and executive director, DeMaurice Smith, is a former partner at Latham and Squire Patton Boggs, the successor to what was once Patton Boggs, in Washington.

Smith’s leadership of the NFLPA during the past decade was chronicled earlier this year in a feature story by ESPN.com, which noted that the ex-Big Law litigator touted his connections to former President Barack Obama and former U.S. Attorney General Eric Holder Jr. prior to getting elected leader of the union in March 2009. Smith’s primary goal during his reign: prevent the NFL from breaking the union.

The CBA agreed upon by the league and NFLPA last year divvies up the massive profits generated by the top tier of U.S. pro football. In mid-March, the NFL inked a multiyear $105 billion broadcast rights agreement with four major television networks and Amazon.com Inc.

As part of an effort to balance an uneven playing field, the NFLPA teamed up in late 2019 with the union representing Major League Baseball players and New York-based private equity firm RedBird Capital Partners LLC to form OneTeam Partners LLC, a Washington-based investment and marketing joint venture that controls the licensing rights to players in both leagues. The NFLPA paid $41.3 million to OneTeam, mostly for royalties and player marketing, during its most recent fiscal year.

Smith, who has faced down several challengers for leadership of the union, has staffed the top ranks of the NFLPA with lieutenants who like himself previously worked at Latham and Patton Boggs.

Ira Fishman, a former Patton Boggs partner-turned-managing director of the NFLPA, received more than $957,000 in total pay during the union’s past fiscal year. Tuaranna “Teri” Patterson Smith, a former Latham associate serving as acting COO of the NFLPA, was paid nearly $493,000 over the past year.

Smith had a total compensation package valued at more than $4.5 million, per the NLFPA’s LM-2, which noted that its executive director also received $40,200 for “Super Bowl tickets purchased.”