Welcome back to the Big Law Business column on the changing legal marketplace written by me, Roy Strom. This week, we look at the cities and practices where lateral hiring is surging, and why. Sign up to receive this column in your inbox on Thursday mornings.

Last week, I wrote about how the richest firms—even Cravath—were doing a lot more lateral hiring early in the year. The surge comes after a year of nearly unprecedented profit growth driven by slashed expenses, hot Wall Street-fueled practices, and partners billing more time in response to panicked clients.

That column caught the eye of Michael Ellenhorn, founder and CEO of Decipher, a competitive intelligence firm that performs due diligence on Big Law hires. He wanted readers to know it’s not just mega-rich firms that are hiring lawyers. And he’s right! But it turns out plenty of firms are mimicking moves from the rich-firm playbook.

Decipher provided an analysis of data from Firm Prospects, which tracks lateral moves. The data show that overall hiring slowed down during the last three months: Firms hired 7% fewer partners from November through January than they did in the previous three years during that same period. Firms across the size and wealth spectrum were generally evenly active, according to the data.

Crucially, though, hiring has surged in the biggest cities and in specialized practice areas over the last three months.

Taken together, the data paint a picture of managing partners on the hunt for lawyers who charge premium rates. It’s an especially important strategy for growth-minded law firms because the market this year may struggle to raise rates with existing clients, and it’s unclear if demand will rebound in 2021.

Firms’ best chance at growth in 2021, then, may be shifting their centers of gravity toward big cities and higher-rate practice groups.

Decipher’s analysis shows cities including Boston, Washington, and New York experienced the most active lateral markets from November through January this year. Lateral partner hires in those cities grew more than 50% during that period compared to the same period over the three previous years. That tracks with what I wrote last week about the richest firms being more active this year: They only hire lawyers in a handful of cities, including New York and Washington. 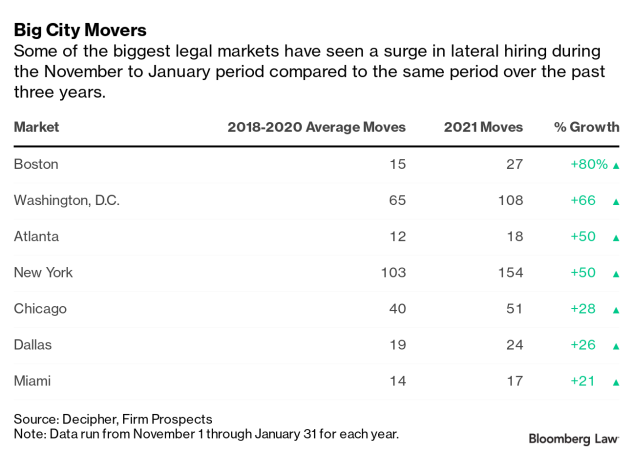 The most active practice groups during the November through January period were bankruptcy, antitrust, and energy. Those groups experienced more than 20% growth in hiring activity compared to the previous three-year average. Meanwhile, practices including labor and employment, tax, and corporate are all down around 20% or more, according to the figures. 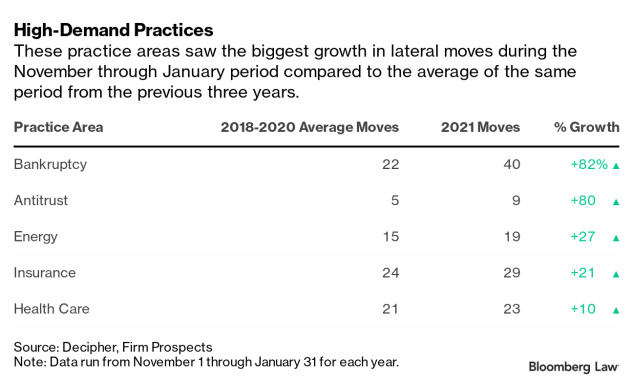 Searching for higher rates is one way to explain firms’ behavior.

It’s hard to overestimate how important billing rates have been during Big Law’s 2020 growth story, but it’s easy to overlook the challenge that presents going forward. Nearly 40% of law firms had billing rates 6% higher in the fourth quarter of 2020 than during that period a year earlier, Thomson Reuters said in its latest Peer Monitor Index. On average, rates grew 5.3% last year. That’s not easy to replicate in any year, let alone one when many corporate balance sheets will be rebounding from a recession.

Major law firms worked basically the same number of hours last year, making growth in billing rates a primary reason why many firms were able to grow revenue. If demand doesn’t pick up in 2021, firms will again be looking to billing rates to provide growth. If clients are tapped out, the next best option may be the lateral market.

One way to raise rates without asking clients to pay more is to hire lawyers who already charge more. A lot of those lawyers are in the biggest cities. So, a byproduct of growing your talent base in cities like Boston, New York, and Washington is that, on average, it should have the effect of raising a law firm’s average billing rate. (And if that growth currently doesn’t come with the cost of New York office space? All the better!)

That’s obviously an exaggeration, and it’s not true that every lawyer in New York is charging more than every lawyer somewhere else. But the big cities are where the biggest checks are cut. And it’s worth noting bankruptcy lawyers, whose bills are paid under the watchful eye of a judge, often collect a bigger portion of their bills than any other Big Law practice group.

The data from Decipher and Firm Prospects show firms across the spectrum are doing what they can to shift their weight into higher-rate cities and premium practice groups.

“When you look at the big markets and they’re booming, that loss is going to have to come from somewhere, and it’s down market,” said Greg Hamman, Director of Business Insights at Decipher. “It’s the smaller and less-expensive markets that are regressing in the number of laterals.”

On DLA Piper: DLA Piper’s new chair, Frank Ryan, told Bloomberg Law he wants his law firm to grow its top line by competing for more business around the globe. He said he wants the massive firm to combine high-end global work with"full service” for clients.

On Coca-Cola: General Counsel Bradley Gayton spoke with Ruiqi Chen about his new program that will dock law firms 30% of their fees for not complying with new diversity requirements. He expects to up the penalty to 50% within the next two years.

On Wilson Sonsini: The Silicon Valley-founded firm entered a deal with Morgan Stanley that will allow the investment bank to use a long-time software program the law firm created to manage startup equity tables. Wilson Sonsini clients will have the choice to migrate to Morgan Stanley’s platform, which has features beyond Wilson Sonsini’s decades-old “Basic Corporate Information” tool. Meanwhile, Meghan Tribe reported on Wilson Sonsini hiring a former Ropes & Gray life sciences partner this week in, you guessed it, Boston.

On FanDuel and DraftKings: The sports gambling companies turned to large law firms to bolster their in-house legal and compliance staffs, Brian Baxter reports. The lawyers hired have worked at firms like Paul Weiss, Sidley Austin, and Skadden Arps.