Gunderson Dettmer’s move to Austin, Texas tests whether a Silicon Valley law firm can grow a client roster in a second tech-focused city far from where it first achieved success.

“The national market should pay attention,” said Kate Reder Sheikh, a managing director at legal recruiting firm Major, Lindsey & Africa. “There is a belief that there can be something comparable to a Silicon Valley created in the Austin area.”

Law firms have been flocking to Austin, lured by the growing presence of companies such as Nvidia Corp., Roku Inc. and Cloudera Inc. Some tech companies have been fleeing Silicon Valley in pursuit of lower costs, shorter commutes and a community where workers want to live.

“Given Gunderson’s strong focus on, and market position in, venture capital and emerging companies, I think Austin makes sense for them,” said Lisa Smith, a law firm consultant for Fairfax Associates. “They have the reputation to be able to compete for that work.”

In the five months since Gunderson Dettmer Stough Villeneuve Franklin & Hachigian LLP opened its office, the firm has been working on venture financings, mergers and acquisitions and strategic commercial transactions, said Wesley Watts, founding partner at the new location. The move marks the firm’s second run at an Austin office. 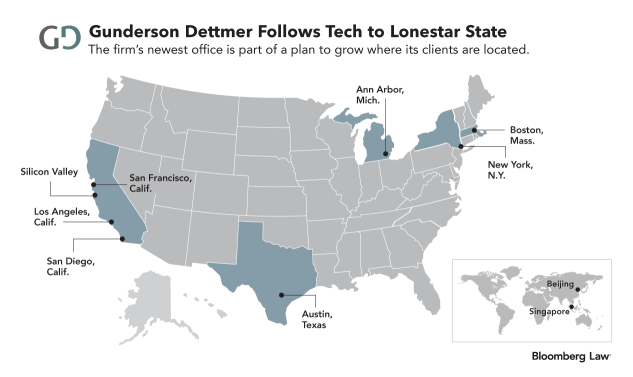 “Austin is certainly going through an incredible period of growth,” he said. “The number of clients and the demand for services from those clients in Austin and around Texas really makes sense for us to have boots on the ground.”

While Gunderson isn’t a Big Law firm, it is a powerhouse and completely fluent in all things involving emerging companies, Sheikh said. The move of such a tried-and-true Silicon Valley brand stands out from larger rivals that have moved to the city, she said.

“A firm that doesn’t have as big a foot print as some other firms have—an office in every city—has chosen Austin,” Sheikh said. “It is a total boost of confidence about the Austin market.”

Austin has a long history with the technology industry, as Michael Dell founded what is now Dell Technologies Inc. in the city in 1984. A more recent wave of technology companies that are moving to Austin has prompted some to label the city “Silicon Hills.”

In December 2020, Oracle Corp. announced it would be moving its corporate headquarters to the city. Other tech companies with major hubs in the Austin area include Tesla Inc., Alphabet Inc.'s Google, Apple Inc. and Facebook Inc.

It remains to be seen if there are enough business opportunities in the city, which is a fraction of the size of Houston and Dallas, to justify the influx of new firms. Gunderson previously had lawyers on the ground in Austin, led by Brian Beard, who left in 2002 for a managing partner role at Wilson Sonsini.

“Using an Austin outpost as a vehicle for recruiting talent is a legitimate strategy,” Austin-based legal recruiter Robert Kinney said of Gunderson, which he called “a great firm.”

“That said, I have not heard from them about an acute desire to grow in Austin, which is a pretty strong indicator that they intend to take it slowly.”

The Austin office represents Gunderson’s approach to grow where its clients are located, Watts said. Gunderson had Austin clients in life sciences, technology and private equity years before the office opened, he said.

“The clients that we work with in Austin range from very early stage companies where you may have two founders, a cat, and an idea, to very mature, late stage companies that are preparing for an IPO,” Watts said. “And everything in between.”

Watts, who is an Austin native, and five associates are working out of the firm’s temporary office located downtown. The office will be adding at least two more attorneys soon, he said.

When it moves into its permanent space, Gunderson plans to emulate the culture of the home office in the Bay Area, Watts said.

Partners and associates sit on the floor together and don’t have offices in the traditional sense, mirroring the tech industry culture. Watts said he joined Gunderson from Vinson & Elkins LLP because of the culture.

Strategically, the Austin office is a launching point for future expansion into the region, Watts said. He declined to name where future offices may be located. Watts said the Austin office, while currently Gunderson’s only one in Texas, “is really a regional vision” for an area that is steadily gaining attention for its tech activity.

“The rest of the country has certainly noticed, including Gunderson,” Watts said. “It says a lot for where Austin is. Not just Austin, but the region itself.”