“We want to bet on ourselves,” Carmody says of the results-based fee deals he often strikes with clients in high stakes corporate litigation. “We want to have skin in the game.”

Carmody won’t say how much SoftBank is paying Neumann—the Wall Street Journal reported the figure in late February—to resolve the dispute between the WeWork cofounder and what was once his biggest backer. He also won’t confirm or deny the Journal’s report that Neumman is getting an extra $50 million to pay Carmody and other lawyers.

What Carmody will say is that his clients, which have included General Electric, Uber Technologies Inc., and hedge fund investor Dan Loeb, rarely pay him his $2,000 hourly rate. Instead, he prefers to do contingency deals in which what he takes home depends largely on whether he wins the case.

“It’s the purest way to be a partner with your client,” Carmody told Bloomberg Law.

Contingency fee arrangements are common in personal injury lawsuits, certain intellectual property disputes, and major class actions involving thousands of plaintiffs. They are increasingly rare in “bet the company” courtroom battles where hybrid arrangements and third party funding have made it easier for everyone to hedge their wagers.

The majority of Carmody’s plaintiff-side cases are “pure” contingency fee arrangements in which the company he’s representing covers certain costs up front but doesn’t pay lawyers an hourly rate, he said. It also agrees to pay his firm, Susman Godfrey, a percentage of any money the company is awarded in court.

“One of the great things about them is they never fund anything,” a Manhattan litigator at one of Susman Godfrey’s rivals told Bloomberg Law. Like others, who also declined to be named, he said he’d like to see his own firm warm up to more contingency cases. “They invest the money themselves and they are willing to take on more risk than many others. They know historically that it’s going to work.”

Litigators at five major law firms told Bloomberg Law anywhere from 3% to more than 25% of their firms’ plaintiff-side cases involve some form of contingency arrangement. The client or an outside litigation funder picks up the tab for expenses and at least some of their hourly rates in a large portion of those cases, however.

Carmody is something of a cross between “Mad Men’s” Roger Sterling and Ben Matlock, the country lawyer portrayed Andy Griffith in the 80s and 90s, according to friends, colleagues, and opponents.

The 63-year-old is an outsize personality who revels in Hamptons dinner parties and reportedly paid nearly $12 million for a Miami Beach penthouse. He also has a preternatural ability to connect with both jurors and the corporate officials who decide which lawyers get the business of defending their companies when hauled into court.

Carmody was one of small number of lawyers who pitched their services to Neumann when the coworking guru turned corporate pariah became ensnared in a dispute with SoftBank. The Japanese company backed out of a deal to buy $3 billion in WeWork stock, including a reported $960 million in Neumann’s shares.

He met with Neumann’s family office team 36 hours after an initial call and already had a strong understanding of the arguments and evidence in the case, according to a team member who spoke on condition of anonymity. Neumann has largely avoided public appearances since resigning from WeWork in September 2019.

“He is very articulate and has a way of speaking that conveys authority and confidence that set him apart from others we spoke to,” the family office source, who attended the meeting, told Bloomberg Law. Carmody’s “command of the fine details” also stood out, according to the source. 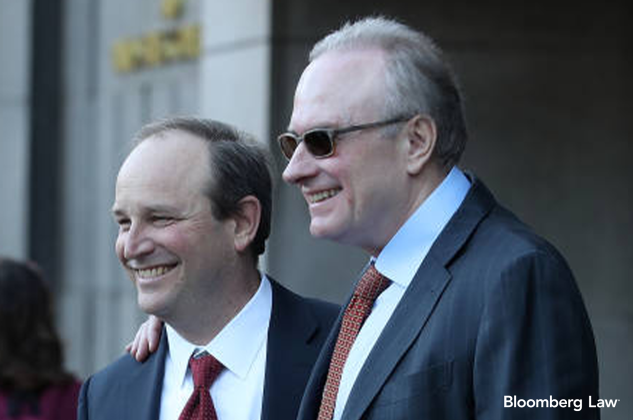 Carmody landed a leading role defending Uber in an existential battle with Google-backed autonomous vehicle company Waymo thanks to a former client, TPG Capital. The private equity firm has a seat on Uber’s board of directors and used it to push the company to add Carmody to a roster of attorneys that already included lawyers from Boies Schiller Flexner and Morrison & Foerster.

Uber eventually gave Waymo a stake in the company worth nearly $245 million to settle claims that it poached Waymo employees to steal trade secrets. That was far less than the $2 billion Waymo initially sought and a previous settlement offer in the neighborhood of $500 million.

“Bill is a guy that’s a New York lawyer with a lot of Texas commonsense,” said Tom Melsheimer, a veteran litigator at Winston & Strawn in Dallas. “He doesn’t take himself too seriously up there, and I think he still relies on the scrappy roots he had in Texas.”

Carmody’s path to one of the country’s elite trial law firms was a winding road not common in Big Law, where attorneys come from top schools and often after prestigious judicial clerkships. He grew up on Long Island in New York, graduated from the Merchant Marine Academy, and worked on an offshore rig and as a Miami bartender before landing at the University of Tulsa for law school.

Carmody later started his own firm in Dallas, taking a mix of personal injury and corporate cases. He convinced Susman Godfrey to take a flyer on him after making a name for himself as a creative marketer and accomplished lawyer, winning a $61 million verdict against Chevron over unsafe work conditions at a refinery in 1996.

Neal Manne, a trial lawyer who leads the firm’s Houston office, told Bloomberg Law that Carmody was a client before he was a partner. Manne represented Carmody in a fee dispute with another lawyer.

The firm was already known at that point for its appetite for contingency fee arrangements, thanks largely to cofounder Steve Susman. Like Susman, who died last year after contracting Covid-19 while recuperating from a bicycle accident in Houston, Carmody is big on betting on himself without outside funding from litigation financers.

“If I like a case, I don’t need to or want to involve a litigation funder because I want all the equity myself,” Carmody said. “If I don’t like it, I don’t think the client should like it either, even if a funder is willing to throw money at it.”

The firm prides itself on an intense case evaluation system, including a weekly meeting in which lawyers pitch particular cases. Each of Susman Godfrey’s 140-plus attorneys gets a single vote and cases in which the firm is putting up its own money require a two-thirds majority.

Manne likened the meetings to defending a PhD dissertation or going before a massive appeals court.

“You don’t just wander into the meeting and say, ‘How ‘bout this case?’”

Carmody has also brought a version of results-based fee model to the defense side of the bar, offering companies being sued a fixed fee in exchange for certain “kickers,” or a percentage of the money saved through a negotiated settlement or win in court.

“I think of myself like a general contractor who builds houses,” he said. “I know how much it costs to build a house—or try a lawsuit—to a pretty good approximation.”

Insurance company Legal & General hired Carmody, lawyer Tibor Nagy, and a Susman Godfrey team in June 2007 to serve as its new defense counsel just six days before a trial in a class action on behalf of some 25,000 policyholders alleging breach of contract.

The company agreed to pay the lawyers a $325,000 fixed fee and 5% of anything less than $60 million that Legal & General was ultimately required to pay as part of a jury verdict or settlement. The jury ruled in favor of the company after a seven-day trial, earning the Susman Godfrey team more than $3.3 million.

“It made sense for us, given the short time frame,” Bryan Newcombe, Legal & General’s top in-house lawyer, said of the arrangement. “Other attorneys have not wanted to do that, in my experience.”