The technology sector has been a bright spot in a chaotic mergers and acquisitions market this year, outperforming others and boosting expectations that the windfall for law firms handling those deals will stretch into 2021.

“Tech is definitely the hottest sector in M&A and I expect this to continue,” said Grace Maral Burnett, Bloomberg Law legal analyst.

For all of the M&A market’s struggles due to the economic impact of the coronavirus pandemic, the tech sector — thanks in part to consolidation in the semiconductor space and the rise of serial acquirers — has not seen the dramatic decrease in activity that has plagued other industries. This has translated into a windfall of work for some of the nation’s top law firms.

Latham & Watkins has led the pack in advising on technology deals, working as principal advisor on 93 deals worth $119.5 billion.

The firm advised NVIDIA Corp. on its $40 billion acquisition of U.K.-based chip designer Arm from Softbank Group Corp. in September. That’s the largest deal thus far in the tech sector in 2020 and one that is expected to reshape the semiconductor space.

Kirkland & Ellis advised on the largest total number of deals so far in the tech space, working on 125 deals worth $46.8 billion. Goodwin Procter advised on 118 deals worth $47.6 billion, followed by DLA Piper, Latham, and Sidley Austin. 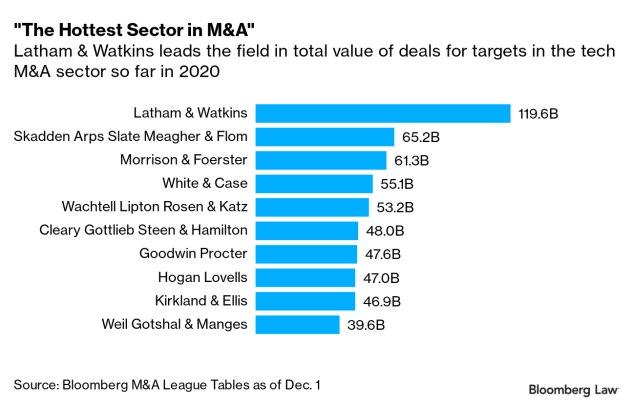 Consolidation, particularly in the semiconductor space, the growth of unicorns looking for liquidity, the rise of special purpose acquisition companies as alternatives to traditional IPOs, and serial-acquirers with significant cash on their balance sheets going after targets have fueled much of the tech M&A activity, said Luke Bergstrom, global vice chair of Latham’s M&A practice and global vice chair of its technology industry group.

“Coming into this year we believed that all of those would drive substantial deal activity in tech M&A and then the pandemic hit and the question was: ‘Are we going to continue to see activity or was this going to look more like what we saw in the financial crisis when there was shut down in the capital markets and M&A dropped off a cliff?’” he said.

While there was a significant slowdown in the second and third quarters in private equity and strategic M&A, the drop off never happened. Rather, he said, activity was at least as robust if not more in tech M&A involving strategics than what the firm saw in 2019.

The pandemic also created opportunities for serial acquirers to pick up companies that might not have otherwise been looking to sell and accelerated many of the trends dealmakers were already seeing in terms of commerce, payment, and fintech, Bergstrom said.

“If everyone is shopping from home and ordering food from home, some companies are actually doing quite well in that environment,” he said. “The whole infrastructure that supports those companies all of the sudden becomes more valuable as there is a greater shift to online commerce, and some of these services that are targeted to people that are working and living in the same room.”

The pipeline is very strong across these platforms, Bergstrom said. A new presidential administration and the prospect of a Covid-19 vaccine on the horizon mean 2021 is set to be a big year, he said.