The global mergers and acquisitions market is quickly and impressively rebounding from the loss in deal activity it suffered in the months following the March 11 declaration of the pandemic. April and May reached historic lows, and even June — which might be considered the beginning of the recovery we are seeing now — saw the lowest monthly volume of any month since Feb. 2017. Now, things are already starting to look much better, if not better than “normal” by some measures. October global M&A volume ($392 billion) reached the highest monthly level since December 2019, the fifth highest monthly volume since the beginning of 2018. And even the number of pending and completed mega deals (the industry-changing deals valued at $10 billion or higher that have defined M&A in recent years) has now surpassed the number announced during the same period last year.

All that being said, global M&A volume totaled $2.5 trillion as of the end of last month, and is down 16% compared to last year. That lost deal volume — consisting of roughly half a trillion dollars — represents many lost opportunities for some M&A market players who rang in the new year expecting a better 2020 than they’ve gotten. And even with global deal activity picking back up, the market is not necessarily picking up where it left off: New winners and losers are emerging in this bewildering landscape.

North America, as a target region for M&A investment, has lost 34% in deal volume compared to last year. On the other side of the Atlantic, however, Europe has only lost 6% in deal volume. And the star region this year continues to be Asia-Pacific, which is the only global region that has seen a year-over-year increase in M&A investment volume in 2020. Asia-Pacific’s success is driven by over half a trillion dollars in volume from its emerging markets (+32% YoY), led by China (+47% YoY) and India (+26% YoY). 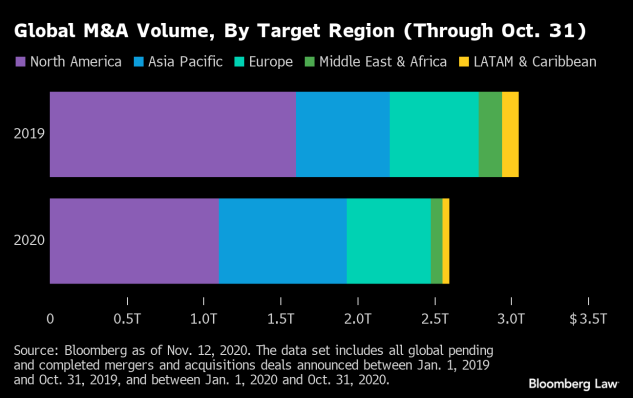 Although North America still holds 2020’s top target region spot, with $1.1 trillion in pending and completed volume through the end of last month, it could conceivably soon lose its position. Asia-Pacific, in second place, is closing in with $831.6 billion in deal volume so far, and could get even closer to the No. 1 spot before the end of the year. If this trend continues beyond the Covid-19 and economic crises, it would mark a major shift in the global M&A market.

As far as the U.S. is concerned, the current state of affairs really does appear to be hurting the activity of M&A parties overall. Through the end of October, $1.4 trillion in deals involving at least one U.S. party were announced and are currently pending or completed. This number represents a 27% year-over-year drop in volume, even counting the bulk of the pre-election surge in deals leading up to Nov. 3. While the general outlook is optimistic for 2021, many factors that would dampen the prospects for a U.S. recovery remain pending.

Despite the current move toward a recovery, it’s possible that North America, potentially weighed down by the U.S., will continue to lag behind Europe and Asia-Pacific in the new year.

Technology is winning. For deals involving U.S. parties, this year’s M&A investments in targets in the software industry (totaling $150.4 billion) and the semiconductor industry (totaling $112.8 billion) have resulted in the technology sector seeing a 27% year-over-year increase in volume. For the semiconductor industry — one of rising importance in geopolitics and national security — this M&A volume is record-breaking and constitutes an eye-popping 479% increase over the same period last year. 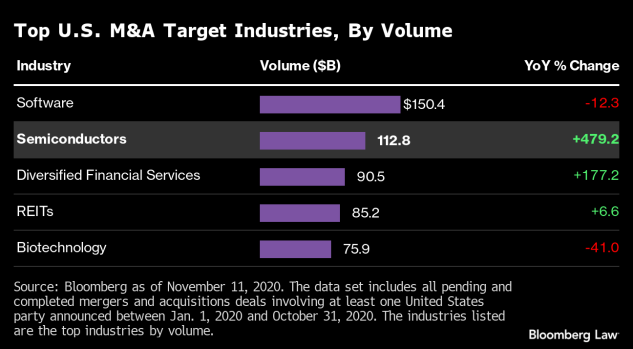 Despite suffering a 12% loss in volume compared to 2019, software is still the No. 1 target industry. Diversified financial services is in the third spot after semiconductors, with $90.5 billion in deal volume, marking a 177% increase over last year. REITs and biotechnology came in fourth and fifth place, respectively.

The technology sector appears unlikely to slow down any time soon, especially considering the increasingly pivotal role technology is playing in pandemic life.

Private equity started the year with an unprecedented amount of dry powder, and based on my rough estimate, they still have quite a bit left to spend. It’s highly unlikely that private equity and venture capital will have a significantly less prominent role in the global M&A market. It’s just a matter of where funds will invest.

By aggregate deal volume and average deal size for all months this year combined, 2020 is rapidly catching up to 2019, and is finishing much more solidly than perhaps would have been expected just a few months ago. Despite seeing very low average deal volumes in January, April, May, and June, the overall average deal size for the year so far ($78.6 million as of Nov. 13) has just overtaken that of the same period in 2019 ($76.6 million). Mega deals have helped to boost the market, again. As of Nov. 13, 33 global mega deals with an aggregate deal value of $634.8 billion announced in 2020 are currently pending or completed, beating the deal count for the same period last year by three deals. 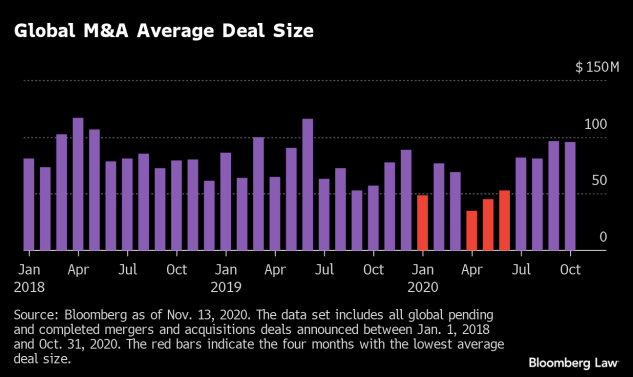 But even the mega market reflects the difficulties of the year in several respects. First, they’ve showed up late in the year and were all but absent from the scene between March and July. Second, the average deal size for mega deals in 2020 thus far is lower than the same period in 2019 ($19.2 billion vs. $28.4 billion). And geographically speaking, as discussed above, their resurgence has not favored all regions equally. Given the complex factors at play that can impact the mega deal ecosystem, it’s difficult to say whether the current surge will continue in 2021. How they fare in the new year will be very telling about the arc of the overall M&A rebound we are seeing.