Kirkland & Ellis pulled ahead of competitors advising on M&A through the first three quarters of 2020, snagging close to $200 billion in deals, amid some recovery in global M&A activity that has been affected by the coronavirus pandemic.

According to newly released M&A advisory legal tables from Bloomberg, global M&A activity in the third quarter of 2020 reached $2.1 trillion, a 23.6% decrease compared to the same time period last year. The rate of year over year change was slightly better than in the first half of 2020, when deals dipped nearly 50% from the first half of 2019.

“We did get a bounce back in the third quarter in terms of volume and numbers,” said Diane Holt, Bloomberg Law analyst and former corporate transactions lawyer.

However, she noted that it is unclear if M&A activity will match 2019 and said there are still uncertainties in the market, for instance, Friday’s volatility after the announcement of President Trump testing positive for the coronavirus. 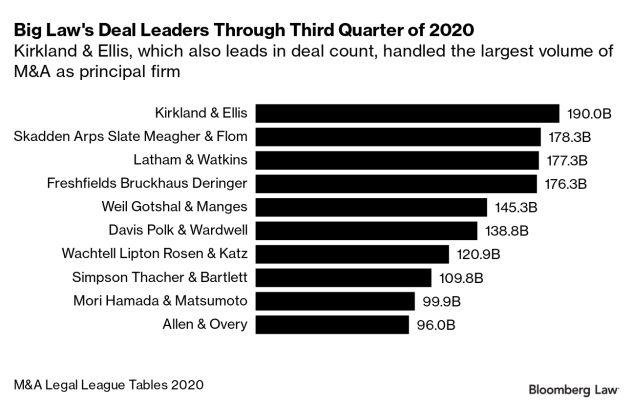 Latham came in second to Kirkland in global deal count by principal, with 314. Goodwin Procter, DLA Piper and White & Case followed in this category.

Though the year was off to a good start, by the end of February, incoming new deals went down materially and a couple of large deals were stalled due to the coronavirus pandemic, said Kirkland corporate partner and member of the firm’s executive committee Eric Schiele.

But by the middle of June, around the time Kirkland advised Grubhub on its $7.3 billion sale to Just Eat Takeaway, Schiele said he saw improvements.

“Right now, I wouldn’t say it’s back to normal, I would say if you sat here looking at a pipeline and put it in any other year you would say everything looks great,” Schiele said. “The M&A market looks a lot like it did last year with the possible exception of the absence of the truly gigantic deals which we just haven’t seen so far this year.”

There has been a trend towards fewer mega deals, or those over $10 billion, over the course of 2020, Holt said.

That follows the pattern in 2019, when mega deals dominated the M&A market in the first half, but slowed in the second half.

Kirkland has gained its No.1 spot by advising on deals of a variety of dollar values.

Kirkland has worked on some mega deals in 2020, including Thyssenkrupp AG’s $18.7 billion sale of its elevator division to a consortium of private equity firms and Infor’s $13 billion sale to Koch Industries.

“Kirkland is continuing to occupy that spot of being the deal machine,” said Holt. The firm beat its closest competitor in deal count, Latham, by around 10% as of the third quarter of this year.

“They’re generally handling reasonably large deals in hundreds of millions of dollars and it seems that they’ve been able to maintain that spot in the market,” Holt said of Kirkland.

“I don’t know that there are other firms that match our presence across all segments of the M&A market,” he said.

Though market activity levels have rebounded in the third quarter, there are many uncertainties that still lie ahead that haven’t existed in years past, like the threat of a second Covid-19 wave in the U.S., which could greatly impact M&A activity.

“There’s just so many macro factors that could take the steam out of that,” Schiele said.

“I think that deals are going to continue to be harder to close both because of economic uncertainty and also because the increasing importance of national security issues,” Holt said. She pointed to the expansion of CFIUS reviews beyond just mega deals and to more jurisdictions.

“It’s fairly likely that we’re still going to see a lot of companies that are paying a lot of attention to balance sheets and making sure that they have ways to generate revenue,” she said.

If classic takeovers don’t do that then they may look to asset sales, spin offs, or seeking minority purchasers, she added.

(Updated with comments from Schiele throughout)