Stacks of one hundred dollar bills pass through a circulator machine in Washington, D.C.
Andrew Harrer/Bloomberg

London-founded Freshfields Bruckhaus Deringer advised companies on $108 billion worth of deals in the first half of the year, as global mergers and acquisitions activity fell dramatically due to the coronavirus pandemic.

Freshfields worked on the highest dollar amount of global deals as principal advisors, according to newly released M&A advisory legal tables from Bloomberg. The firm also topped the rankings for global announced deals by volume, a metric that includes specialized deal-related work like antitrust and executive compensation.

As principal, Freshfields advised on 69 deals, including two of the year’s largest transactions. The firm’s M&A team advised in its $31.4 billion acquisition of and in its $18.7 billion sale of its elevator division to a consortium. The firm’s average deal size was $1.6 billion.

Freshfields position atop the M&A league tables follows an active investment by the firm to expand its footprint in the U.S., particularly within the M&A and corporate space. Still, its success was very much a tale of two quarters over the first six months of 2020 as the coronavirus pandemic stalled economies across the globe and shelved M&A activity.

“Overall deal counts worldwide up until March is one story, and from the fourth week in March onward, it’s a different story,” said Diane Holt, Bloomberg Law analyst and former corporate transactions lawyer.

Skadden Arps Slate Meagher & Flom followed Freshfields in deals by volume as principal and global deals announced, advising on 66 deals as principal worth $100.7 billion. The firm, advised Willson Towers in its acquisition and on all-stock acquisition of the discount brokerage valued at $14.5 billion.

Kirkland & Ellis, Latham & Watkins, and Allen & Overy rounded out the top five law firms in deals by volume by principal for the first six months of 2020.

These figures only tell part of the M&A story in 2020. A continued slowdown could change the leader board and take a bite out of the fees that firms typically charge for their services.


Over the first half of 2020, global M&A activity decreased dramatically from $1.9 trillion in 2019 to $1.1 trillion. Transactional volume for the second quarter fell to its lowest point since 2004.

“We are finally start to see the effects of the pandemic in the M&A market,” said Bloomberg Law legal analyst Grace Maral Burnett. “Q1 was slow, but Q2 was devastatingly low, by volume, by deal count, no matter how you slice it.” 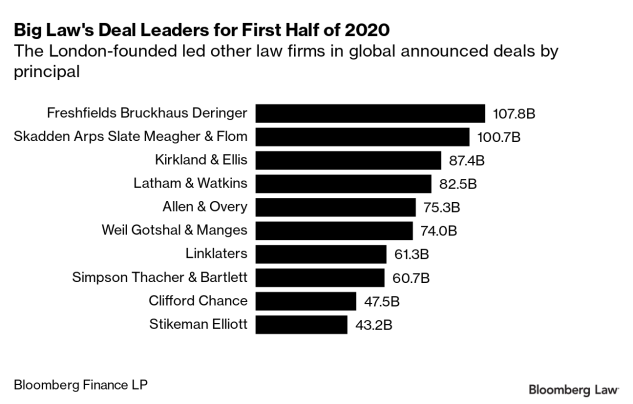 Despite landing at the No. 1, No. 2, No. 3 spots overall for the first six months of the year, Freshfields, Skadden, and Latham landed at No. 16, No. 7 and No. 15 in deals announced by volume in the second quarter, respectively.

“Starting in March, we had about a dozen deals within a period of seven days all die and I imagine that’s indicative of what happened across the board,” said Ethan Klingsberg, partner and Head of US Corporate and M&A at Freshfields. “They all just went on hold.”

“The much lower average deal size has a huge impact on what lawyers can charge in terms of fees,” Holt said.

As firms move into the second half of the year, Holt said she expects that there will still be a lot of disruption in the M&A space that will put a lot of pressure on law firms to do things differently.

“Fewer deals means that there’s more people fighting for the small number of larger deals and I suspect that that’s likely to continue,” she said.

Despite the deals drop off, there have been bright spots and signs of potential recovery.

Klingsberg, who joined Freshfields in October from Cleary Gottlieb Steen & Hamilton, said he saw a promising shift in the second half of April. Clients started calling about strategic ideas ranging from selling divisions, buying divisions of other companies, or buying companies outright.

“Now we’re in a situation where some of those deals are going to be announced in the next month,” he said. Klingsberg anticipates more deals will be announced in July across the market generally, though it won’t be on pace with last year.

Latham’s M&A team has been busy, despite a 34% drop in global private equity activity, thanks to its industry focus primarily in technology and life sciences, he said.

Megadeals, the transactions typically defined as those in excess of $10 billion, dominated the first half of 2019. They were less frequent in the first half of this year, said Bergstrom, “but our platform is designed and structured so we operate across a larger section of the value chain generally and so we’ve continued to see a substantial amount of activity in tech and life sciences.”

The technology sector—though down by nearly 39% year over year, it still accounted for $111.9 billion of M&A deals in 2020—has been a bright spot.

Klingsberg said he anticipates technology space, along with life sciences and healthcare, will be sectors where M&A confidence rebounds. Recovery in other sectors, like retail and industrials, where things seem overvalued is almost impossible to predict, he said.

For a sector that craves certainty, the M&A forecast for the rest of 2020 is still largely uncertain.

“With concerns about a second wave, with the energy crisis, social unrest, things are behaving in unpredictable ways, so I think it’s safe to say the third quarter won’t be a great one, but exactly how it will look I don’t know,” Maral Burnett said.