A group of Texas-based lawyers of color have been promoted to top posts at big firms this year, as the Lone Star State sees intense competition and the industry’s diversity shortcomings come under a spotlight.

As companies and tech-startups flock to Houston, Dallas, and Austin, firms are courting local talent and expanding their energy, technology, private equity, and intellectual property practices.

“There’s a dramatic increase in the number of headquarters that have moved to Texas, and I think that gold rush of opportunity has brought with it greater diversity,” said Jill Louis, a 31-year veteran corporate lawyer in Texas. She was promoted to managing partner of Perkins Coie’s Dallas office in February, less than a year after joining the firm from K&L Gates.

Most of those key promotions came less than a year after protests over George Floyd’s death at the hands of police in Minnesota and a national reckoning with racial inequities brought more attention to the lack of diversity at large firms.

Law firms unveiled new diversity and inclusion initiatives to tackle deficits in their hiring, retention, and promotion of diverse talent. But progress has so far been limited, driving skepticism from attorneys, including among lawyers of color.

“The numbers don’t lie,” said Paul Stafford, chairman of the African American Lawyers Section of the State Bar of Texas and founder of the majority-minority litigation boutique Stafford Law Firm, based in Dallas. “Show me that you’re truly committed to diversity in a real way and retain these people, and maybe the skepticism and cynicism will dissipate.”

Black attorneys comprise only 2.1% of law firm partners across the country, while Asian and Latinx partners represent 4.1% and 2.8%, respectively, according to the National Association of Law Placement’s most recent diversity report.

The pipeline to managing partner and other top firm posts tightens for lawyers of color and is even narrower for women of color. 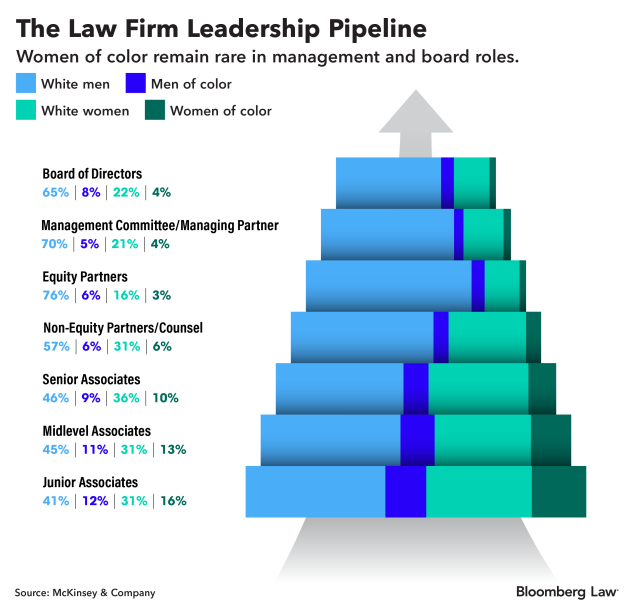 A bevy of the country’s largest law firms are increasingly looking to get a foothold in Texas.

Quinn Emanuel founder John Quinn dubbed the state capital of Austin a “boom town attracting the cream of the U.S. tech sector” in January, when the litigation firm opened an office there.

“We want an office that looks like the City of Houston,” Porter told Bloomberg Law.

Firms looking to plant a flag in Texas often do so by poaching attorneys with deep ties to the state. The low cost of living, shifting demographics, and changing political landscape in the state’s biggest cities is attracting high-quality attorneys of color at the same time, according to Griffin.

He spent his first three years in Texas at Baker Botts’ Houston office and then at litigation boutique Scott Douglass & McConnico in Austin, where he worked for 16 years before his move to Quinn Emanuel. Griffin has handled a wide range of litigation, including in pharmaceuticals, oil and gas, private equity, and intellectual property.

His twin brother Justin, a Quinn Emanuel partner in California, had long tried to recruit Griffin. Only when the firm began mulling an Austin office did Griffin reach out to John Quinn himself about a move.

“In coming over to the Austin office, I knew that I wanted a leadership role because I’ve spent a long time in this city and I know this market pretty well,” he said. “As firms grow into Texas, there are plenty of opportunities to identify diverse talent for leadership positions.”

“I know of too many lawyers who’ve labored in Big Law and haven’t gotten an opportunity to lead,” he said. “Not everyone wants to, but we certainly have the talent, experience, and breadth of knowledge to do so.”

Minority lawyers made up 16% of law firm partners in Houston last year, up from 7% in 2010. Partners of color grew to 11% from 6% over the same span in Dallas, according to NALP data. But the gains have been smaller for Black partners, who made up 2% of Houston partners and 1% of Dallas partners in 2010. Over the past decade, they’ve risen by just 1% in both cities.

Some view the recent rise in diverse talent as long-awaited payoff from the advocacy of affinity organizations, such as those within the State Bar of Texas. Others credit strong lateral and horizontal networks among lawyers of color in prestigious law offices, developed as the industry has become more diverse.

Kirk said the recent racial justice movement has pushed firms to recognize the talent among partners from historically overlooked and marginalized backgrounds.

“I’m a believer that luck is what happens when preparation meets opportunity,” he said.

“For people who’ve been at firms in excess of 10 to 12 years, I do think timing, environment, and the receptivity to seeing us as business leaders capable of running firms and offices is better now than it has been in the last 10 to 15 years.”

Clark, who started her new role at Norton Rose in January, said her rise to partner-in-charge of the firm’s Houston office a decade ago made her an anomaly in Texas Big Law. She was the only Black woman in the office at the time.

“I didn’t fit the typical image of what someone would expect the partner in charge at this great law firm to be,” she said. “I’m sure there were individuals who would have preferred to be in that position instead of me, but I was selected, and I stepped up to the challenge.”

She credits her own talent, and office leaders who didn’t treat her any differently than her White, male colleagues.

“I am absolutely convinced that sponsors that I had, and continue to have, played a big factor in helping me reach the level I’m at today.”

Clark recognizes that her trajectory isn’t like many other lawyers of color, or even Black women, in Texas Big Law.

“I do believe that in Texas we’re seeing more women assume leadership positions,” she said. “What’s less certain is whether there’s been significant improvement with Black women assuming leadership roles.”

Stereotypes about the workplace skills of women of color often impede their career trajectories, says Tsedale Melaku, a sociologist and author of “You Don’t Look Like a Lawyer.”

“Black women and other marginalized groups aren’t just dealing with their actual workload,” she said. “They have to worry about if they’re going to be mistaken for the paralegal or the secretary, or they have to remind someone that they’re not this other Black person.”

“If you don’t give them the proper amount of mentoring, workflow, or promotion to hold them, then you can’t keep them.”

Stafford is glad to see more women, people of color, and LGBTQ people in executive positions, but he isn’t ready to start patting Big Law on the back.

“When your numbers are atrocious, you don’t have anywhere else to go but up,” he said. “When you put a handful of folks in these key spots, it looks like an 100% increase because it is.”

Stafford said only about half of the law firms in Dallas have been willing to provide attorney diversity information as part of a survey this year.

He says it’s incumbent on lawyers from underrepresented backgrounds who’ve risen to high ranks in these firms to pave the way for their peers: “Anecdotal success stories aren’t a strategic plan for collective progress.”

Jill Louis is the first Black woman to lead Perkins Coie’s Dallas office in the decade since it was launched. She wants to increase the ranks of women, people of color, and LGBTQ people in the firm, and chip away at underrepresentation.

“Those people whose rise to leadership only benefits them—that is not an increase in diversity that will systemically increase diversity,” she said. “I want to be the type of partner that I appreciated when I was an associate and encourage people of color and LGBTQ people to feel comfortable practicing at the highest levels in a law firm.”